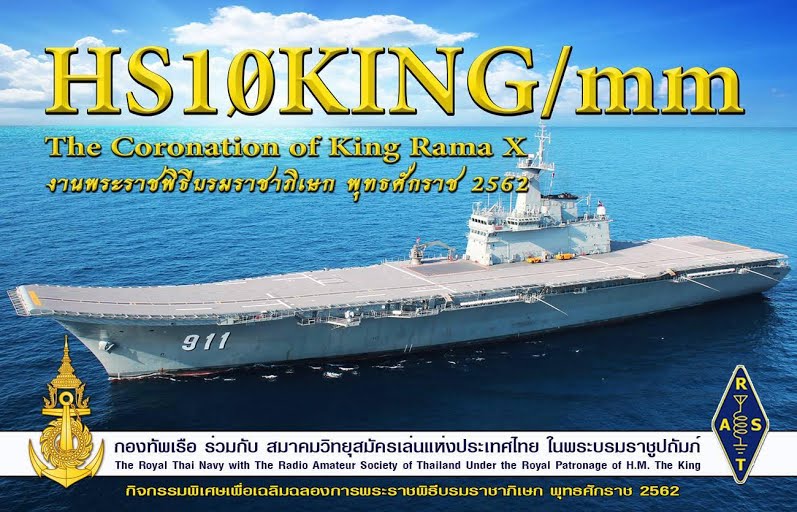 January 2020
Click this image >
to visit our Thai-language site:

RAST plays a role in social networking to share information, pictures and videos of interest about amateur radio. You can follow developments on our Facebook page or by following RAST on Twitter or watch our videos on YouTube.
Click on the images at left or the links above to learn more.

About RAST, a brief profile of the society.


How to apply to join RAST 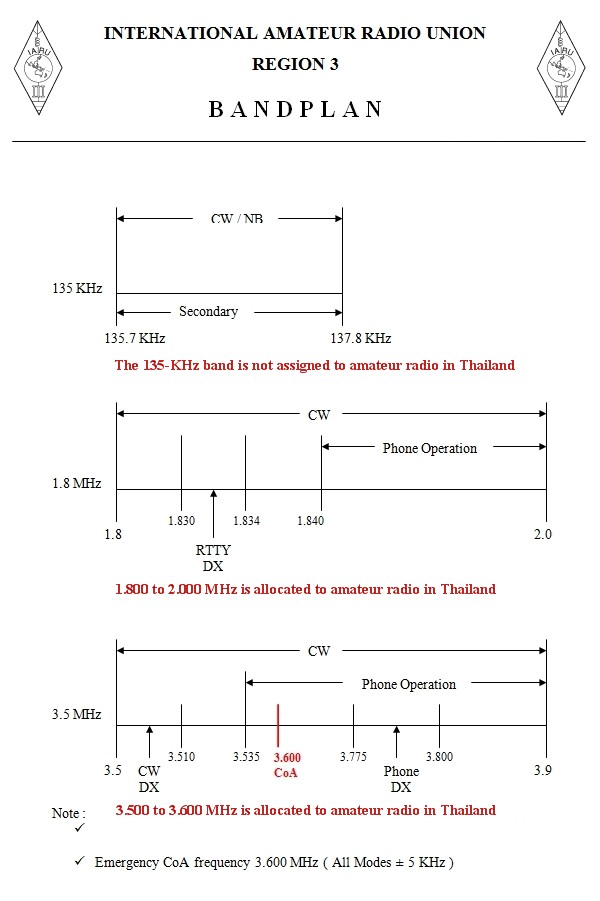 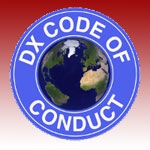 The DX code of conduct

-- For DX chasers
-- For DXpeditioners
and here's a translation in Thai

The Office of The National Broadcasting and Telecommunications Commission (in Thai) 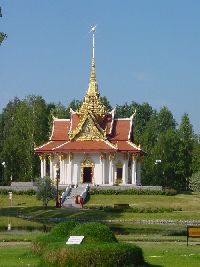 A collection of QSL cards from Thailand

and other ham radio organisations in Thailand 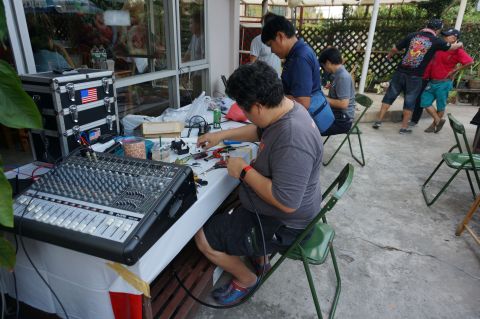 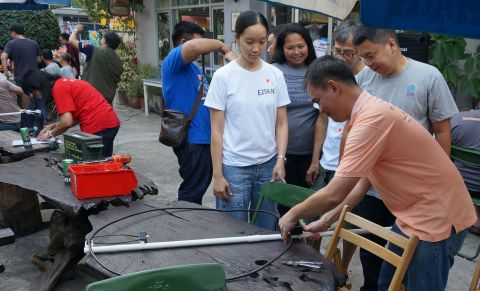 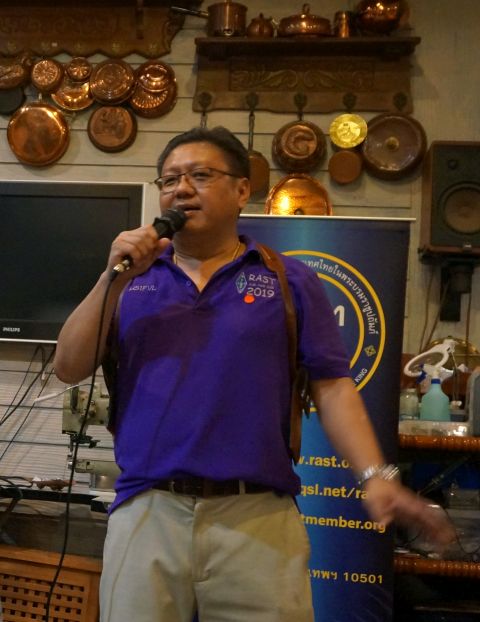 The Radio Amateur Society of Thailand welcomed in 2020 with a New Year Party at Rot Meu Mae restaurant in Laksi on Sunday, January 12 which was attended by scores of RAST members.
The party began at around 3 p.m. and continued for around six hours with activities both indoors and outdoors, along with a lucky draw and an exchange of gifts that had been brought to the party by many of the guests.

Pictured at right is RAST President Jakkree, HS1FVL making an announcement during the party.

Kits were assembled outside, along with loop antennas and there was plenty to see and do during the party.
From around 5 p.m. onwards a good buffet dinner with a wide variety of spicy Thai dishes was available while soft drinks and beer were on hand all afternoon and evening with an ample supply of chilled beer cans thanks to donations from several members.
The next monthly meeting of RAST should be on Sunday, February 2, 2019 at Sena Place Hotel as usual. 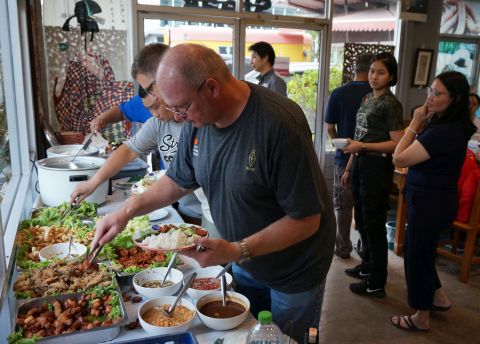 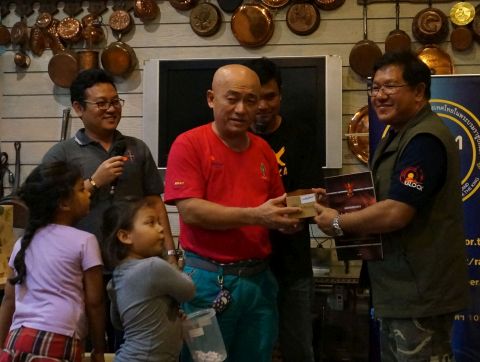 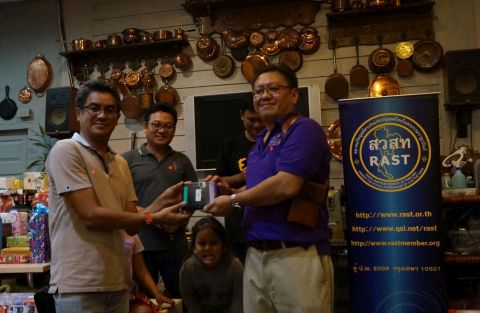 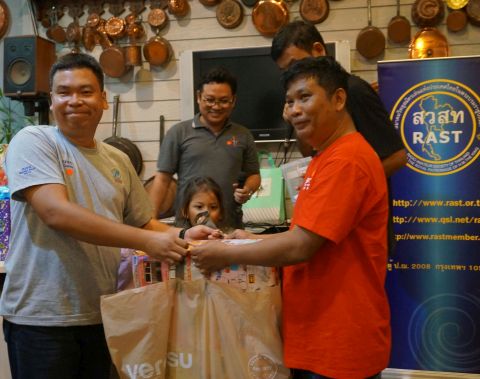 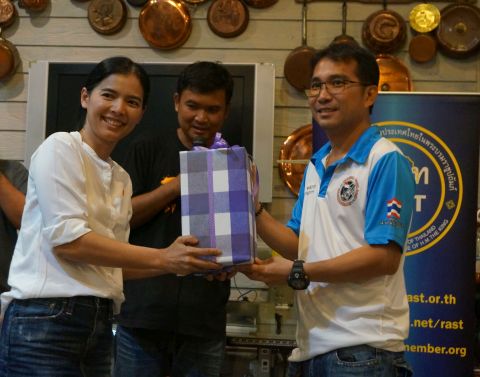 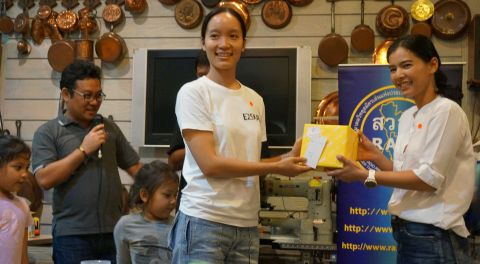 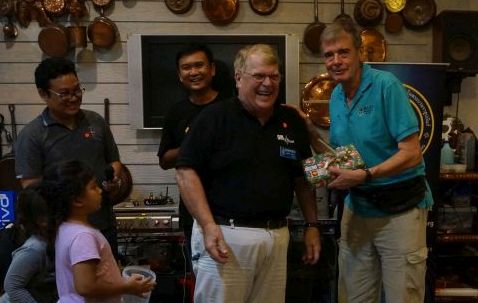 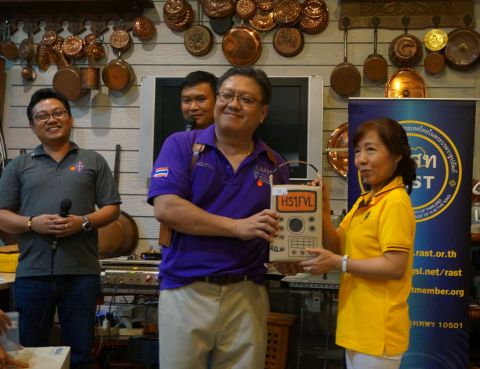 Hopefully, these photographs capture the atmosphere at the RAST New Year Party. 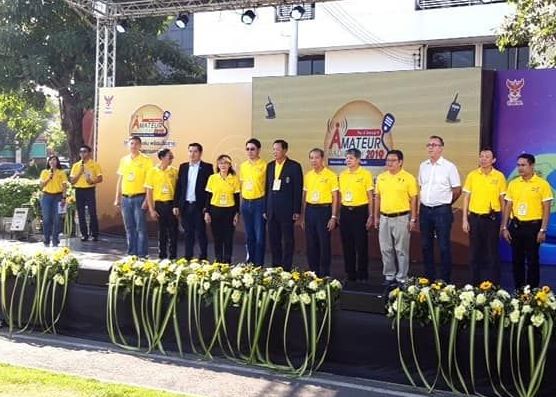 Senior NBTC officials, Representatives of RAST and other amateur radio societies as well as speakers during the conference take the stage following the opening of Amateur Radio Day on December 14, 2019 at the Office of the NBTC.


Thailand's regulator, the National Broadcasting and Telecommunications Commission (NBTC) hosted its fifth Amateur Radio Day in its grounds on Phaholyothin Soi Sailom (Soi 8) on Saturday, December 14, 2019 which was well attended and saw booths and exhibits by amateur radio societies from all over Thailand.
RAST was participating in a big way with several booths, including one conducting CW tests at 10, 20 and 30 words per minute and another which had HF and VHF stations operating with the callsign HS19NBTC.
The society also provided speakers about Earth-Moon-Earth (EME) communications, featuring Alex, HB9DRI and Joe, HS2JFW.


The theme of the event was innovation in amateur radio and there were competitions when innovations were judged and awards were issued during a dinner in the evening. 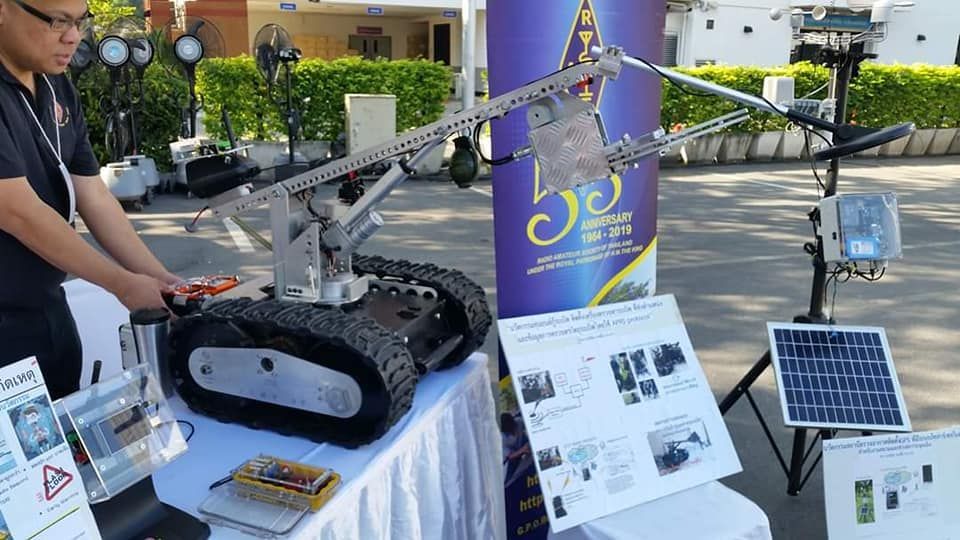 Nimit, HS1IFU, shows his robot in action at the RAST booth during Amateur Radio Day.


Many participants praised the NBTC for hosting such a comprehensive event and several from overseas said that they wished that the regulators in their home countries would organize something along these lines.
Hopefully the photographs here convey the atmosphere of the event. 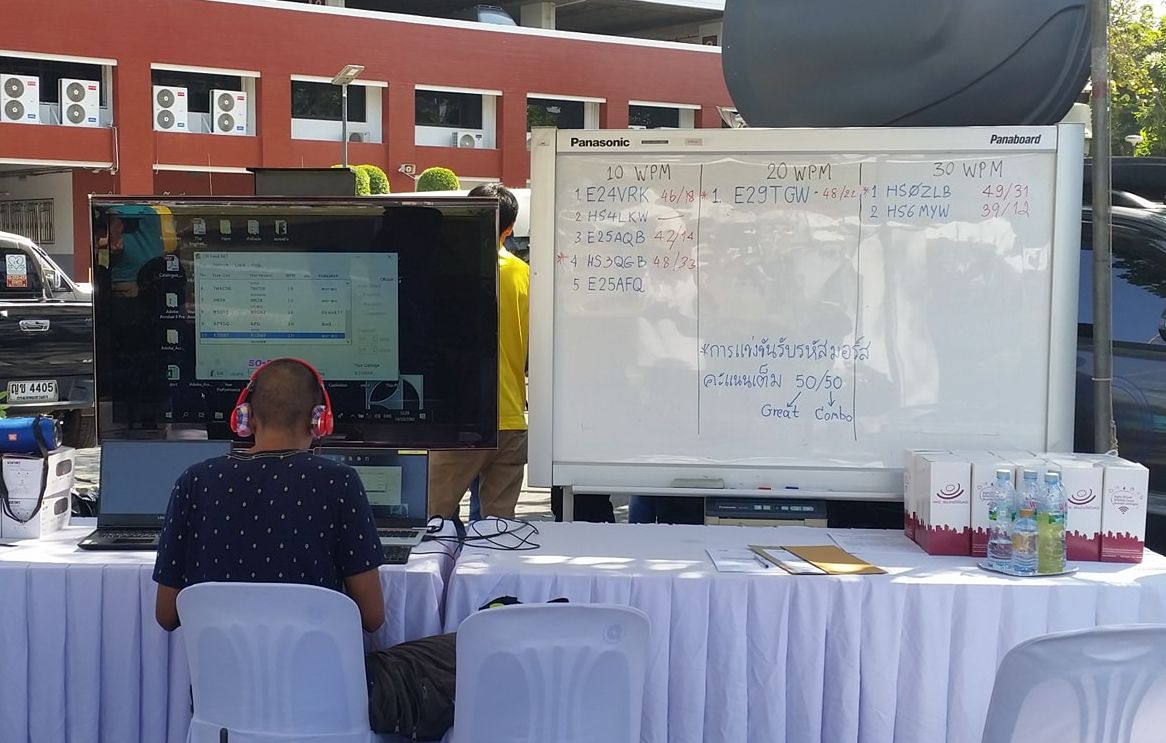 A participant does his best in the CW contest. 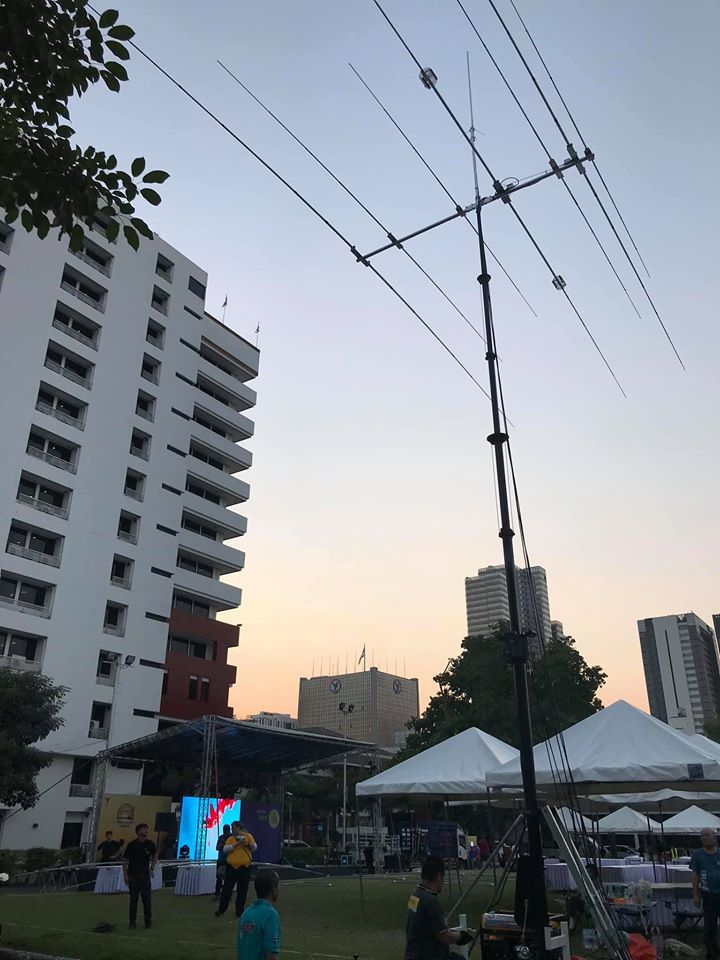 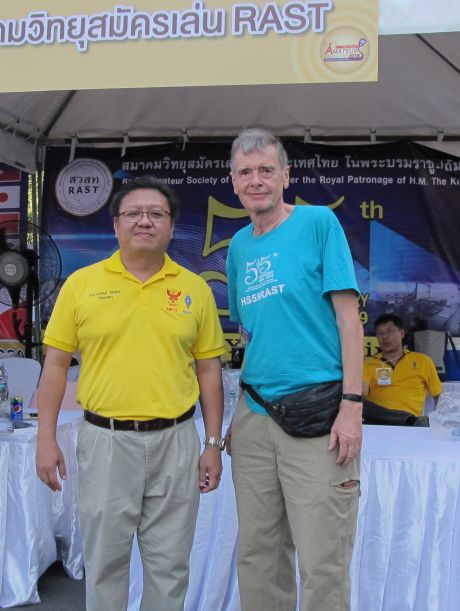 At left, the HF antenna used by RAST for operating from the special event station and at right, RAST President Jakkree, HS1FVL and Vice President Tony, HS0ZDX at the event. 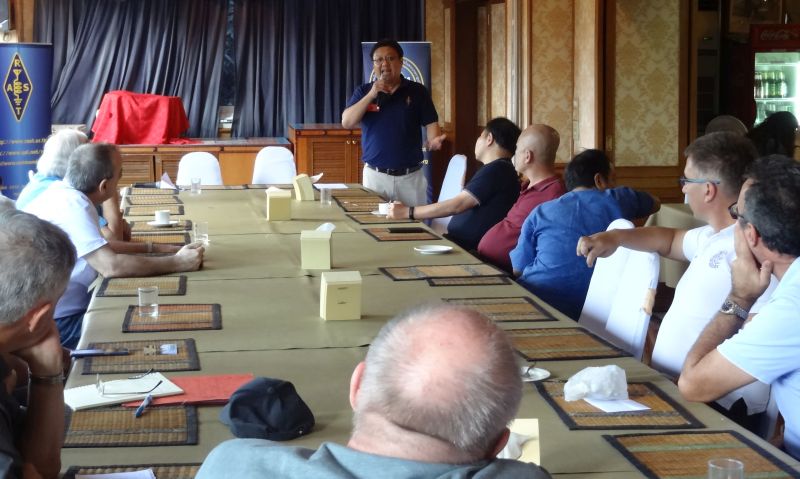 RAST President Jakkree (Jack) explains plans by the NBTC, Thailand's regulator, to grant permission to amateur radio operators from countries without a bilateral reciprocal agreement with Thailand to obtain a temporary operating licence in the format HS0/homecall. 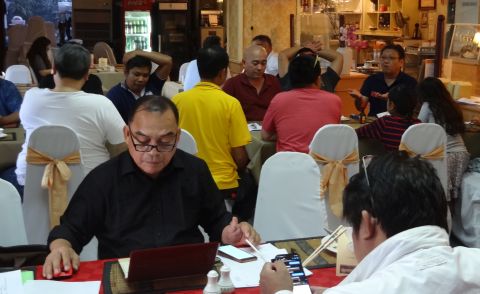 After a successful International Alliance Volunteers Conference co-hosted by the National Broadcasting and Telecommunications Commission (NBTC) and RAST last month, the Radio Amateur Society of Thailand under the Royal Patronage of His Majesty the King will be participating in the upcoming Amateur Radio Day event on Saturday, December 14 at the NBTC Secretariat when it will be providing a speaker for the conference that begins at 9 a.m. in the morning.
RAST will also have tents on the office grounds with VHF and HF stations operating while there will also be exhibition tents representing other amateur radio societies in Thailand at the NBTC's annual event.
During the December RAST meeting at Sena Place Hotel on Sunday, December 1, RAST President Jakkree (Jack), HS1FVL, invited all members to attend the Amateur Radio Day event and he introduced Alex, HB9DRI who will be delivering an address on amateur radio EME (earth-moon-earth) communications at the NBTC auditorium.
Food will be available and there will also be a dinner served in the evening and all members and any radio hams visiting Thailand on Saturday, December 14 are welcome to attend.
Jack also announced that negotiations were underway with the NBTC for citizens of countries without a bilateral reciprocal agreement to obtain a temporary operating permit to get on the air from Thailand with a callsign in the format HS0/homecall and there were several questions about this, but Jack said that the details had not been finalized by the NBTC.
During the meeting there was also one minute of silence in memory of Finn, OZ1HET-SK and HS0ZLM-SK who passed away last month in Denmark. He will be missed by many members who knew him well and Finn had formerly served as station manager for the HS0AC club station for many years. May he rest in peace.
Members were also informed that the next meeting of RAST will be its annual New Year party which will be held on Sunday, January 12 at the same venue as in the past few years, Rot Meu Mae restaurant near the North Park Golf Course in Laksi, in Bangkok's northern suburbs. 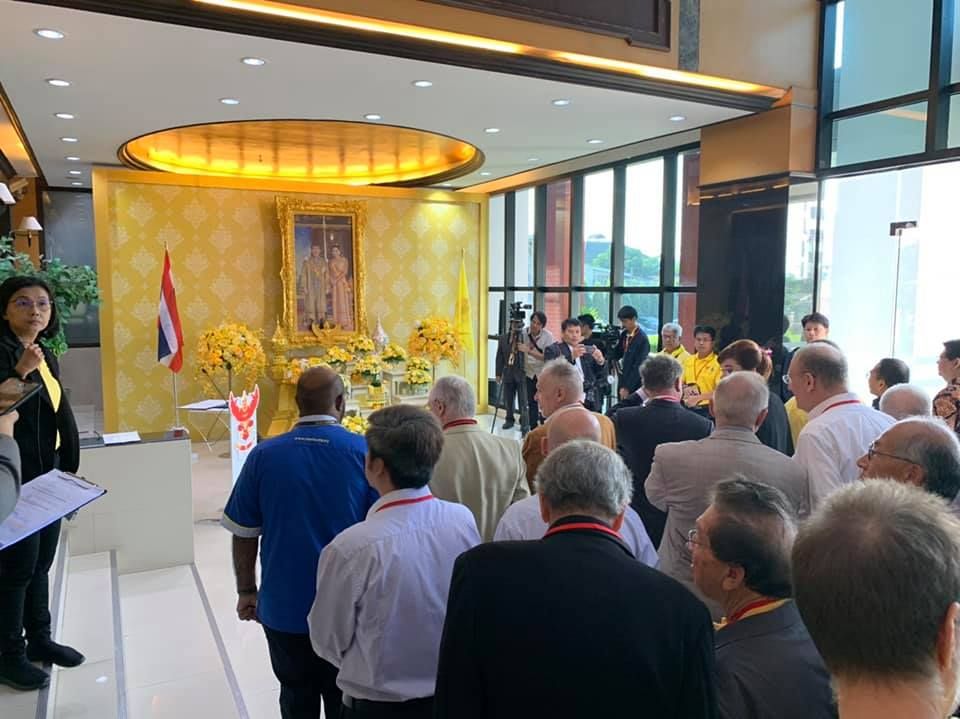 Delegates prepare to pay obeisance to His Majesty King Vajiralongkorn in front of the royal portrait at the NBTC Secretariat. 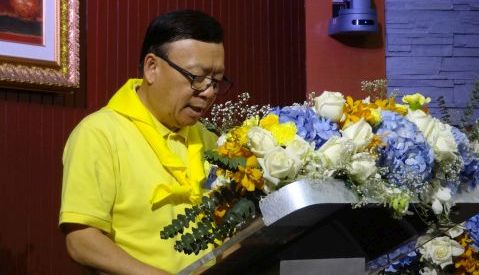 NBTC Secretary-General Takorn Tantasith participates in the opening ceremony of the International Alliance Volunteers Conference on Saturday, November 16 at tne Office of the NBTC. 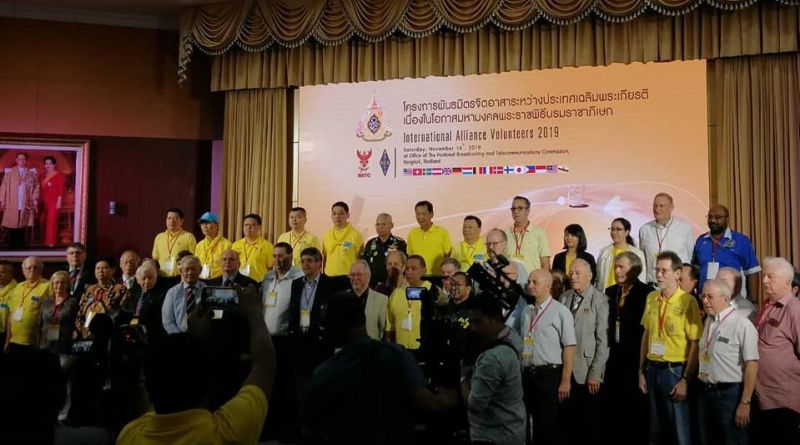 Just a few of the participants can be seen here posing for a group photograph during the conference.

Thailand's first major conference about emergency communications for amateur radio took place on November 16, 2019 at the National Broadcasting and Telecommunications Commission (NBTC) Secretariat in Bangkok with representatives of 16 countries and Thailand participating.
Called the International Conference Volunteers 2019 Conference, the objective was to promote the development of volunteering for amateur radio communications during crises and disaster events and to enhance the partnership between amateur radio operators for long term cooperation and international goodwill.
Participants also paid obeisance to His Majesty King Vajiralongkorn, King Rama X, to commemorate his recent coronation. King Rama X is the patron of the Radio Amateur Society of Thailand and has the callsign HS10A.
RAST jointly hosted the conference with the NBTC that was attended by over 100 delegates. Representing the International Amateur Radio Union (IARU) was the Region 3 Chairman, Wisnu Widjaja, YB0AZ, along with a Region 3 Director, Don Wallace, ZL2TLL, who both made presentations about the role of amateur radio volunteers in disaster and crises in foreign countries.
There were also many other presentations by representatives of national amateur radio societies. Also making a presentation during the conference was the IARU Region 3 Secretary, Ken Yamamoto, JA1CJP, who also represented the Japan Amateur Radio League (JARL). Other presentations were made by representatives of several national amateur radio societies including the German Amateur Radio Association (DARC), the Indonesia Amateur Radio Association (ORARI), the Philippines Amateur Radio Association (PARA) and the Luxembourg Amateur Radio Society (RL).
The countries that were invited to participate in this conference were those with a bilateral reciprocal agreement with Thailand, along with Finland where an agreement is almost finalized. There were also representatives from countries in Asia including Japan, Malaysia, Indonesia and the Philippines that had been invited to participate.
The RAST presentation was about lessons learned from the Tham Luang cave incident in Chiang Rai, northern Thailand, when a junior football team of 12 boys aged between 11 and 16 were trapped, along with their coach, for over two weeks in a vast cave complex following flooding in late June and early July of 2018. Speakers who recounted the incident on behalf of RAST at the conference were Larry Riser, HS0ZKZ, Dr Pakorn Watanachaturaporn, HS1EFA and Pornchai Semjang, HS2JFW who is also a former president of the society.
There was also an emergency medical project explained by a senior adviser to the KDDI Foundation, Mr Yosuke Uchiyama, JH1NBN and Dr Pairoj Boonsirikamchai, a deputy secretary general of NIEM, the National Institute for Emergency Medicine.
The event enhanced the partnership between the countries involved whose representatives had participated in the event and the conference helped to promote awareness of the significance in the role that amateur radio operators can play when an emergency such as when extreme weather, an earthquake or a tsunami occurs. 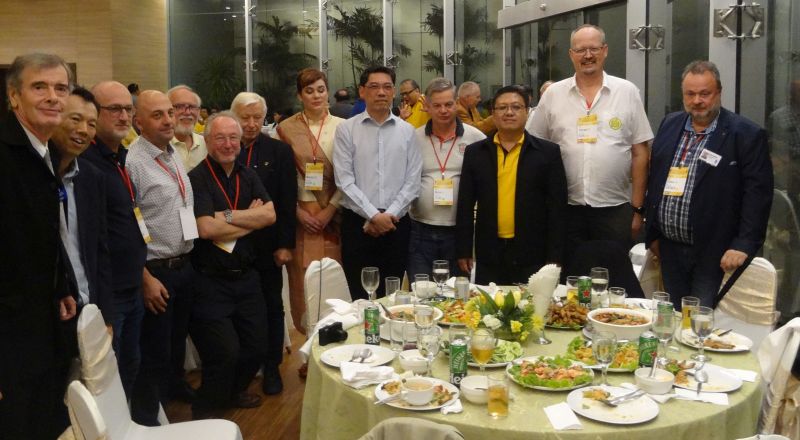 A group ohoto taken during a dinner hosted by the organizers on the eve of the event.

Here is a news report about the event in Thai: 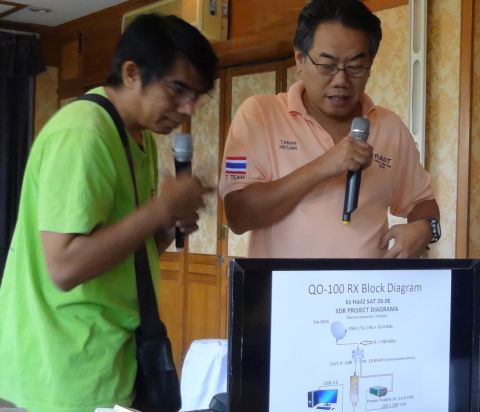 The highlight of the November RAST meeting at Sena Place Hotel on Sunday, November 3 was a presentation by Tanan Tangseeprom, accompanied by Anant, HS1GAB, about contacting the first geostationary satellite for amateur radio, Es'hail or QO-100 (short for Qatar Oscar 100) from the JAISAT Ground station, HS0AJ and the RAST club station at Rajapruek University, HS0AC.
Currently, these are the only two stations authorized by the NBTC to make such contacts, although, with the right equipment, other hams in central or western Thailand would be able to listen to signals from the satellite which is over Africa and as at about a 6 degree angle above the horizon from Bangkok. Thailand is right on the fringe of the signal map and it would be impossible to listen or make contacts from the Northeast of Thailand.
The first contact made from the HS0AJ Ground Station was with PY2RN in Brazil on March 10, 2019 and the illustration below shows the footprint of the satellite, with Thailand and Brazil at opposite sides.
Also at the meeting was an EME enthusiast, Alex, HB9DRI and previously his callsign had been ZS6EME when he was based in South Africa and who will be based here for four years and has already applied to join RAST. 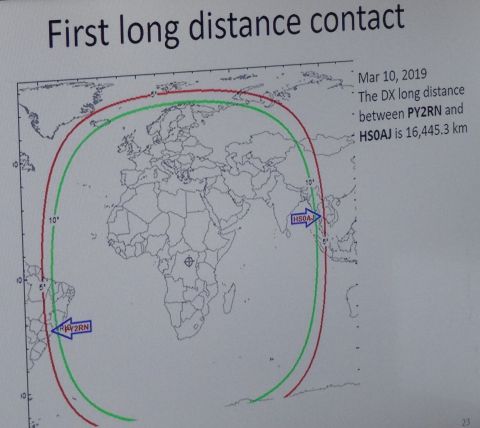 54 candidates sit for US FCC exam on October 12 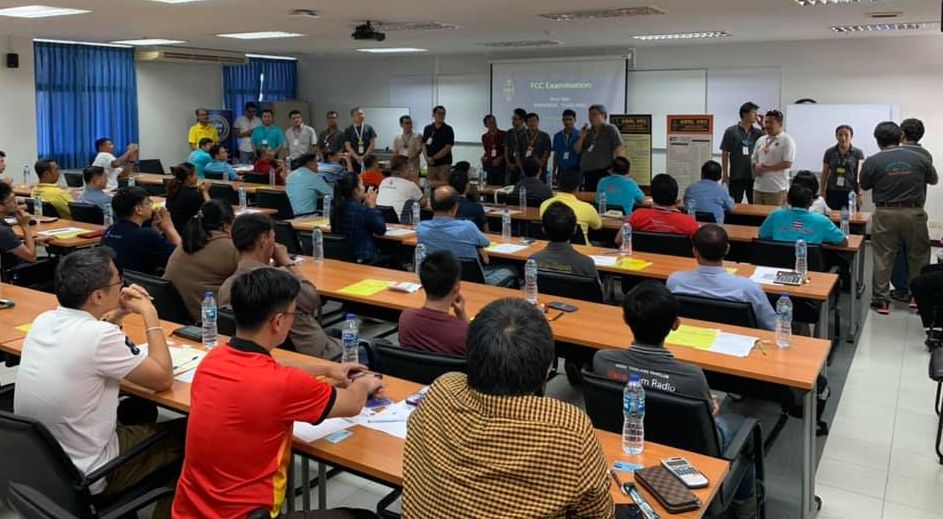 A total of 54 candidates sat the latest US FCC exam conducted by RAST at the King Mongkut's Institute of Technology in Lad Krabang (KMITL) on Saturday, October 12, 2019. -- Photo courtesy of Champ, E21EIC

We tell the story of the disastrous 2011 flooding of RAST's club station at the Asian Institute of Technology to the north of Bangkok in pictures. RAST has received generous donations from many individuals and organisations and the station was back on the air in July 2014.