Click "play" on the video above to see over 60 photos taken during the dinner. 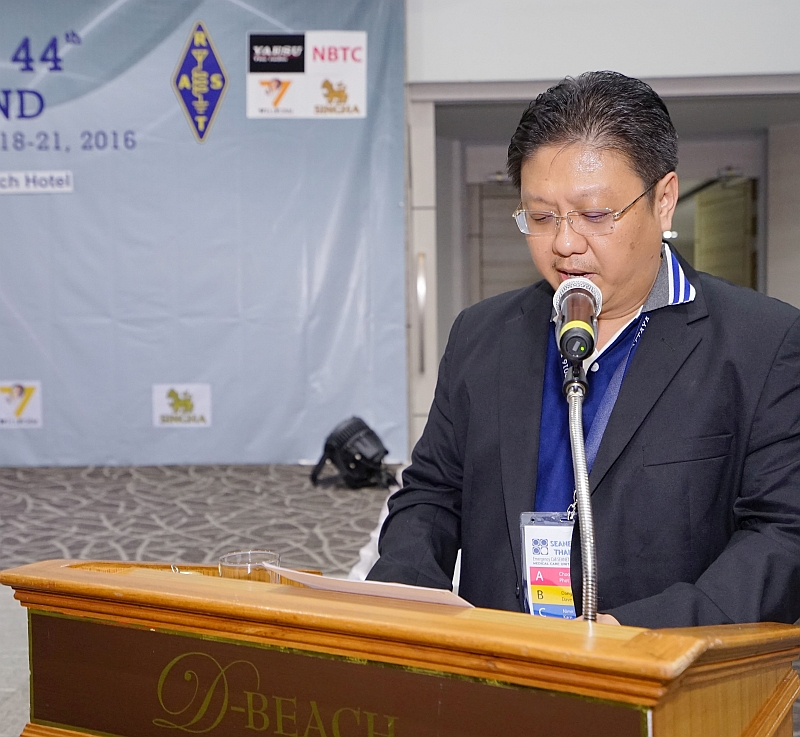 The gala dinner included a formal opening ceremony by a commissioner of Thailand's regulator, the National Broadcasting and Telecommunications Commission (NBTC), along with presentations and performances by representatives of each participating country and lucky draws with many valuable gifts being awarded. These included handheld and desktop transceivers from Yaesu Musen Co. Ltd., which was a major sponsor of this SEANET Convention and the top prize was a Yaesu FT 991 transceiver, while there were also two Yaesu FT 891 transceivers and six FT 291 transceivers among the prizes that were awarded.
Helping things move along by making announcements during the evening were Pomchanok (Ray) E23PKO, Tony, HS0ZDX with assistance from Dave, HS1LCI and Nimit, HS1IFU, while complimentary cans of beer were handed out to the delegates thanks to Singha Beer which was one of the sponsors of the event.

At around 7.30 p.m. everyone was invited to stand while the royal anthem was played and this was followed by a minute of silence in mourning for His Majesty King Bhumibol Adulyadej, HS1A who had been RAST's patron.
Following this Jakkree made an opening address in which he recalled how His Majesty had inspired stratospheric ballooning and the JAISAT-1 satellite project under which Thailand's first amateur radio satellite is scheduled to be launched next year.
Jakkree then invited Gen Sukit Kamasunthorn, who is an NBTC Commissioner and Chairman of the Subcommittee for Amateur Radio, to speak when he also praised His Majesty the King's leadership in radio communications. He also congratulated RAST for hosting SEANET for 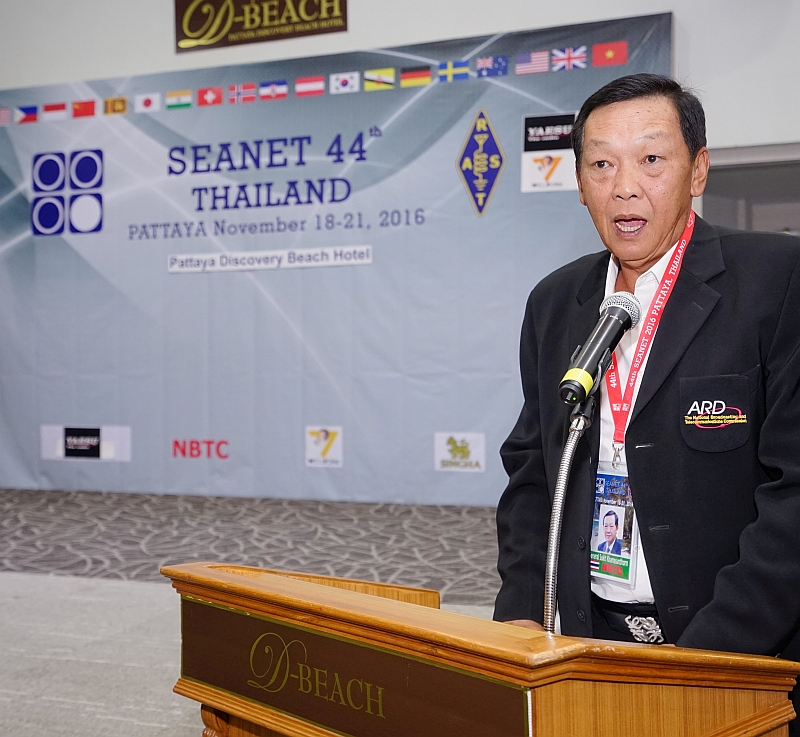 
Plaques are presented to representatives of all countries attending

The NBTC commissioner then presented plaques to representatives of each of 18 countries that were represented at SEANET this year.
The evening was a succession of presentations, with many country representatives presenting a congratulationary plaque or pennant to RAST.
These donors included delegates from India, Indonesia on behalf of ORARI, the Indonesian amateur radio association, China, Korea on behalf of KARL, the Korean Amateur Radio League, from Brunei on behalf of BDARA, the Brunei Darussalam Amateur Radio Association and from Malaysia on behalf of MARTS, the Malaysian Amateur Radio Transmitting Society.
Soon it was show time with representatives from each society or group going on stage to sing a song or to play a musical instrument, including an enchanting violin solo performance by Seiichi Miyamoto, JE3BEQ and a dynamic harmonica performance by Songqing Hu, BA4HU. Meanwhile, groups from Korea, Japan, India, Malaysia, Brunei and Thailand each took to the stage to sing together.
There were other presentations, including by Hans, DF5UG recalling past SEANET Conventions with some slides and by Raja, VU2KKZ who provided an illustrated account of how he and others spent 10 days in a car making the trip from India to Pattaya overland through Myanmar.

The presentations were interspersed with bouts of Thai classical dancing, 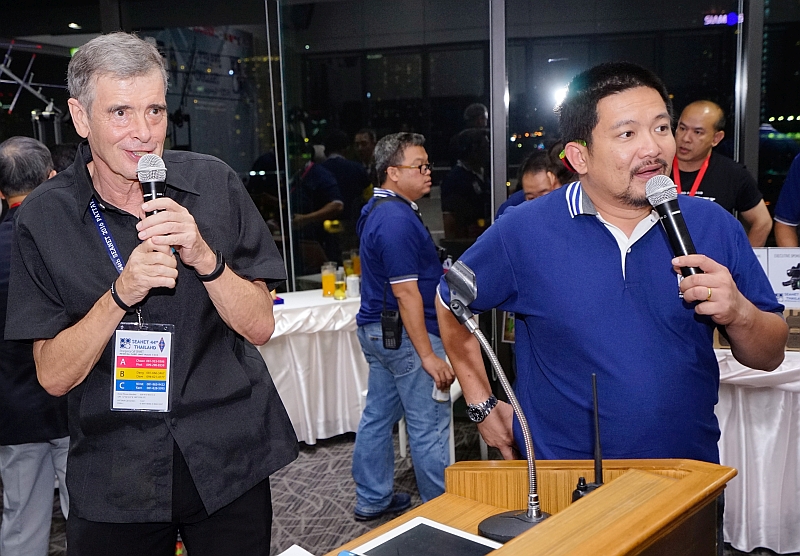 Khon dancing and Thai sword fighting, while plaques for the winners of the SEANET Contest for 2016 were presented by Gen Sukit as follows:
First place, single operator - phone: JA3AOP (received on the winner's behalf by Taizo, JA3AER)
First place, single operator - SEANET: YC0UTI (received by Jel, YC1GJS)
First place, Single operator - rest of the world: T32AZ (received in person by SEANET delegate Ken Taylor)
First place, single-operator - mixed: 9M2A (received by Lim Kean Chuan, 9M6LC)
First place, multi-operator - 9M6SDX (received by Godfrey, 9M6GY)
As the Gala dinner was drawing to a close at around 10.30 p.m. the SEANET Flag was formally handed over by the President of RAST, Jakkree, HS1FVL to Raja, VU2KKZ representing the organising team of the 45th SEANET 2017 Convention in Siem Reap.
This was followed by the final lucky draw for which the top prize of a Yaesu FT 991 transceiver would be awarded... and the lucky winner was V85DAD while Nopanant, HS0USB, the manager of G Simon Radio, the Yaesu dealer in Thailand, made the presentation to the prize winner and Yaesu will arrange shipment to his home QTH directly from Japan.
Thailand was the last country to take to the stage to sing a song and shortly after that, at the close of the gala dinner, committee members of RAST involved in the organising of the 44th SEANET Convention gathered on stage for a group photo. 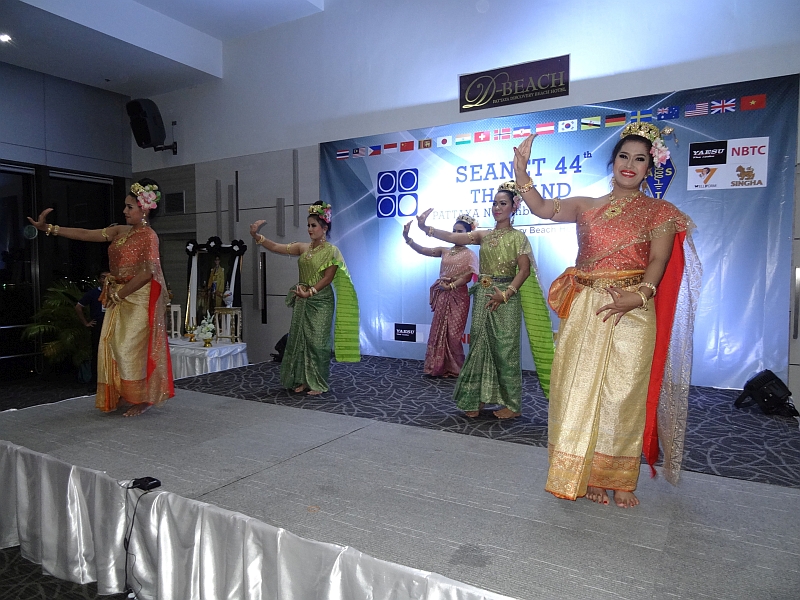 "Good evening everyone.
"On behalf of all members of the Radio Amateur Society of Thailand under the patronage of His Majesty the King (RAST) I would like to begin by expressing grief at the loss of our patron, King Bhumibol Adulyadej, who has meant so much to everyone in Thailand during his reign over the past 70 years.
"King Bhumibol Adulyadej, who passed away on October 13, was a guiding light in so many fields that it is almost unfair to single out his achievements in just one area, such as amateur radio. Apart from excelling at his royal duties, His Majesty was also an accomplished jazz saxophone player, a 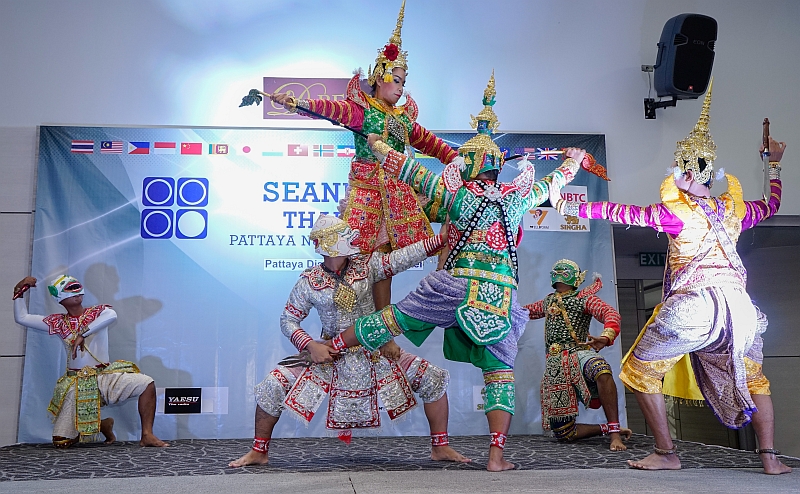 sailor and sailboat designer who won a gold medal in the Fourth Southeast Asian Peninsular (SEAP) games in 1967, and an inventor who had been awarded patents for rain-making and for a waste water aerator.
"Assigned the callsign HS1A, King Bhumibol had long experimented with radio communications techniques, including the deployment of Air Force aircraft to fly in circles while hosting a repeater. This was a technique that had enabled His Majesty to communicate between Chiang Mai and Bangkok using a handheld transceiver with less than 1 watt output some 30-40 years ago.
"When His Majesty explained this in a televised audience with an Army commander-in-chief 10 years ago a group of RAST members were inspired to practice stratosphere ballooning which, in turn, led to the JAISAT-1 amateur radio satellite project. This is Thailand's first amateur radio satellite which is sponsored by RAST and funded by a the National Broadcasting and Telecommunications Commission (NBTC) -- with the satellite scheduled to be launched next year.
"So His Majesty's legacy will live on... May he rest in peace.
"RAST is deeply honoured to be the host of this SEANET Convention, which has its origins back in 1971 when the first convention was hosted in 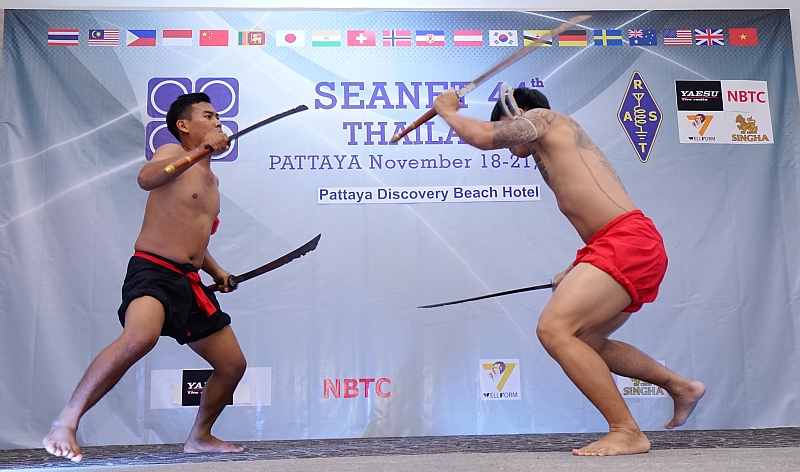 Penang, Malaysia.
"Then RAST stepped forward the following year and invited everyone to Bangkok. After that we hosted three more conventions in Bangkok -- in 1977, 1982 and again in 1988 -- before introducing some venue changes as the host. After that, conventions were held in Chiang Mai in the north of Thailand in 1991, on the island of Koh Samui in the South in 1995, in Pattaya for the first time in 2000, followed by Bangkok again in 2004 and the northern Thai town of Lampang in 2007.
"We are very happy to see such a strong turnout this year as we return to Pattaya and we hope that everyone has a fulfilling and rewarding time here."
"Earlier I referred to the NBTC, which is Thailand's regulator, and the agency is extremely well-informed about, and supportive of, amateur radio so I have invited the Chairman of the Sub-committee for Amateur Radio, Commissioner General Sukit Khamasunthorn, to honour us with his presence and to formally declare open the 44th Annual SEANET Convention.
"General Sukit, would you please step forward to the microphone...
"Thank you..." 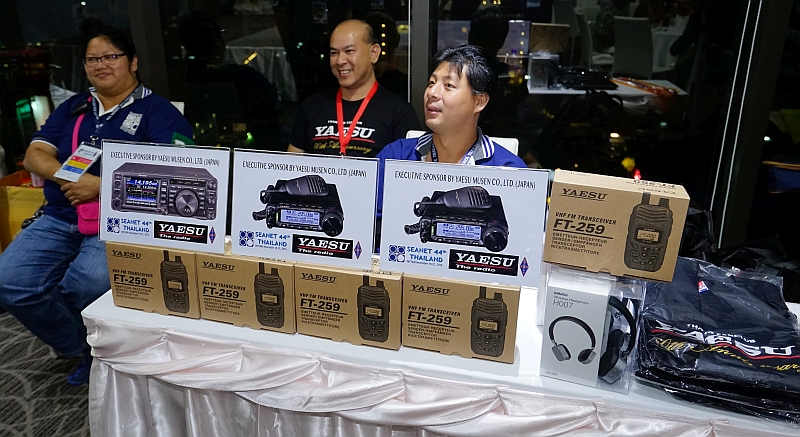 "Good evening and thank you for the introduction, Khun Jakkree. "... On behalf of the Chairman of the National Broadcasting and Telecommunications Commission, my fellow commissioners and all the NBTC staff, may I begin by also expressing our grief at the loss of the Father of all Thais, His Majesty King Bhumibol Adulyadej, HS1A.
"His Majesty the King had been an inspiration for Thais in all walks of life -- and especially in the field of radio communications where, among other things, His Majesty had pioneered the use of airborne repeaters, as the RAST president just pointed out.
"In another example, some 10 years ago the NTC, which was the 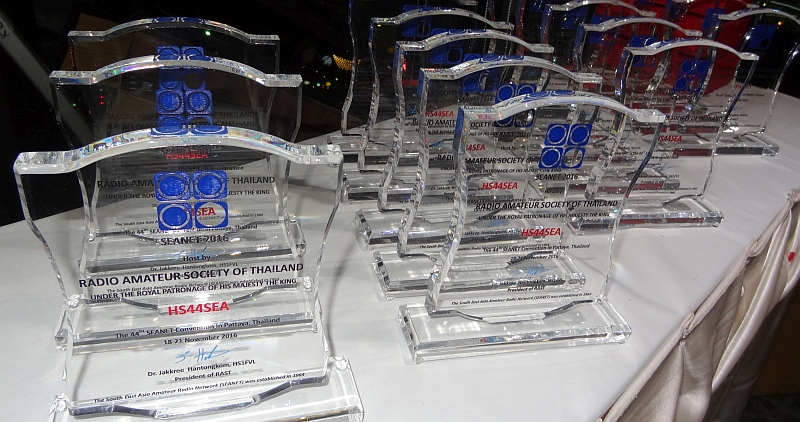 predecessor to the NBTC, explained that it was acting on advice from His Majesty King Bhumibol when it set up two amateur radio repeaters in Sukhothai and Uttaradit in northern Thailand to help provide communications in flood-stricken areas.
"At the NBTC we are well aware of the role that amateur radio can play during emergencies -- and how nets, such as the Southeast Asia Net, or SEANET, can help by relaying messages and expediting assistance for those in need.
"It is also heart-warming to witness the social aspect of SEANET, and to see how an on-the-air network can evolve into an annual international get-together of like-minded radio amateurs -- and an event such as this one that has now continued for over 40 years. "May I also take this opportunity to congratulate the Radio Amateur Society of Thailand under the patronage of His Majesty the King for being the host of this convention for the 10th time this year.
"For it is true that amateur radio knows no boundaries and the hobby is a global activity -- indeed, it is the original social network that brings like-minded people with a common interest together and enables them to be inter-connected.
"May I extend a warm welcome to all the SEANET delegates here and with this I would like to declare the 44th annual SEANET Convention in Pattaya open."