Miscellaneous "Radio" Tips / History and Service Notes page.
Just about "anything" to do with radio receiver's / amateur transceiver's but not in any huge detail.
enjoy......Dave N9EWO


Early samples of the Tecsun PL-600 receiver suffered from extremely BAD audio distortion on LW / MW and SW bands. This modification will clear the bug up (NOT TESTED by N9EWO). With later production this nasty was apparently cleared up ? Be sure and read this entire article right to the bottom of the page. "You Tube" link shows the modification after the 1K (1000) ohm resistor was added. NOTE : John's KB5AG modification indicates to use a 2K (2000) ohm resistor here ? Remember this is for the PL-600 and NOT for the PL-660/680 etc. ! 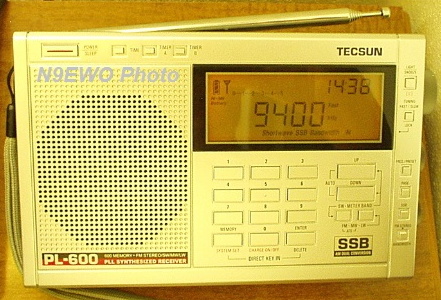 A very simple and fully reversible modification for the Sangean ATS-803 / ATS-803A (and many other variants)
that eliminates the "Chuff" sound when tuning. Ribbon cable easily unplugs and inserted back after
the above wire has been bent up. Has been verified to work as described by N9EWO. (N9EWO photo edits)

The following mod will remove the "chuffing" heard while tuning the Sangean ATS-803 / Realistic DX440 radios. WARNING:  Done at your own risk.

1. Place the radio face down on a suitable surface and orientate it so that the base of the radio is towards you.
2. Remove the battery cover and take out the D-cells. You do not need to remove the AA batteries but if you do will lose your clock and memories, so  make a note of them before you go on.
3. Remove the six screws which hold the back of the radio in place.  One of these is in the battery compartment.
4. Lift off the back cover and swing it over towards your left to lay it down.  This is to avoid breaking off the wire going to the whip antenna.
5. Locate the 8-wire flat cable which runs from the circuit board above the loudspeaker on your right horizontally across to the rf/if board (see photo above). The cable plugs into an 8-pin socket which is located almost dead center in the radio on the RF / IF board.
6. Carefully remove the cable from its socket. Identify the second wire from your left in the cable. (Second to last on the side furtherest from the loudspeaker.) Bend this wire up and out of the way so that it will not plug back into the socket or make contact with the socket in any way.
7. Carefully plug the cable back into the socket and check that the wire you modified is not making contact with the socket.
8. Repeat steps 4 through 1 in reverse order and reprogram your clock and memories.
9. Turn on the radio and enjoy the lack of "chuffing". (Note : You may still hear a "thud" while tuning across a strong station.)

The main purpose of the muting circuit that gets disconnected by this modification is probably to make the set silent when you hit the"search" button. I personally think that it is a feature to hear the "search" in operation.

The only drawback in this mod is that it will allow all sounds to come thru. Even some that you might not want , such as turning on the power, switching between memories,  ct. Its like a popping sound, even while band scanning. By attaching a 64K ohm resistor between the 2nd wire and it's socket, the popping is cushioned.
Other RadioShack  / Sangean "Anti-Chuff" (muting disable) Modifications
- RadioShack DX-390 / Sangean ATS-818 (W9JES) - RadioShack Realistic DX-375
- RadioShack DX-398 / Sangean ATS-909 (N1KGH)
- Radio Shack DX-440 / Sangean ATS-803/A Low Sensitivity Repair (N1NUG, You Tube Video)

With the help of "The Way Back Machine" (Internet Archives) a few interesting dated GRE history pages.
(our thanks to Paul L. WW2PT for the links)

* Only very early production samples of the DX-394's were manufactured in Japan (most samples and all of the B versions were made in China).

The Bearcat DX1000 Communications Receiver (Made in Japan). After the sale of "Electra" Bearcat to Uniden in 1984, Uniden continued to sell the DX-1000 for a few years after. YES....Uniden actually selling a GRE manufactured product for awhile. It took a few YEARS to sell out well past GRE manufacturing it (which was only for about a year), as they were not a "stellar" seller at around $ 500. street price. Some samples will have a black sticker on the rear panel indicating the ownership change of the company to Uniden. Seems to have received a undeserved "Bad Rap" over the years ? Uses similar bandwidth filters and types as with the Kenwood R-1000, including the nice 12 kHz bandwidth for wide audio quality when conditions warrant (model not tested) . See the "Ham Radio Today" March 1987 magazine review here (located on pages 28 to 32, PDF scan provided by World Radio History web site).
JRC NRD-525 Important Serial Number Information


If you are looking at a used Japan Radio Co. (JRC) NRD-525 Communication Receiver, here is very important serial number data to keep in mind.

JRC NRD-525 "Serial Number" History (sorry....the internal NRD-525 EPROM Firmware is not easily or is possible to be updated)

- BR36771 (and above) The tuning rate of the main tuning knob and the step increment of the UP and DOWN switches can be changed by hitting the RUN button.  Selects the desperately needed 2 tuning knob speeds between 10 Hz or 100 Hz steps. The UP / DOWN slewing buttons toggle between 20 kHz and 10 kHz. Early samples only have a single VERY POKY and extremely frustrating 10 Hz tuning knob step.


We had a defrost timer replaced in a near 20 year old refrigerator. The mechanical one that was in it was replaced by the Supco model UET120 which is of a solid state design. It creates some pretty nasty SW/HF interference with it's internal switching power supply (as I was afraid of). But it could have been worse. It’s RF noise in my situation (and is at a pretty major level) is between 2200 and 4000 kHz. It drops off greatly after that with only a very low level spur or harmonics above up to around 20 MHz.

Thomas Witherspoon of "The SWLing post.com" reports to me that between his refrigerator and freezer are the 2 worst HF RFI generators in his house. It appears that all new refrigerators / freezers are using these "el-cheapo" Chinese solid state "Defrost" timers now. These might seem more robust, but as I read around the internet they are not. Guessing are more prone to failure from spikes/power line surges ? Yeah, the new DX catch....the neighbors refrigerator.   Thank goodness I still have the MFJ-1026 device at HQ in case it gets too bad, but that is pain to have to deal with. 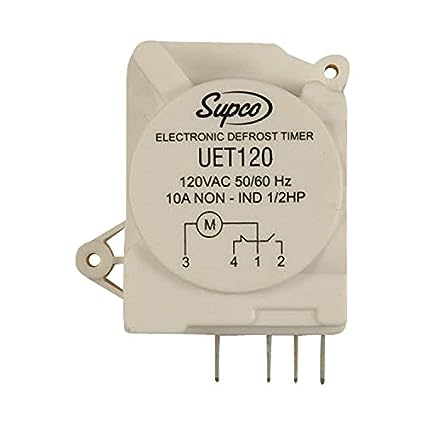 Display failures are now very common with the JRC NRD-525, NRD-535 Receivers and even with the JRC JST-135 Transceiver. These radios all use a "custom made" florescent type display and now being quite aged are suffering from ever weakening brightness and then just failing completely in time. They have not held up well with age. One could TRY and replace the 4 high voltage (35 to 50 volt) electrolytic capacitors in the display DC-DC converter circuit, but usually when these go out.....that's it (it turns into a great doorstop or computer controlled only set) Sorry...no new parts are available anymore.  So a "MAJOR" Caveat Emptor (buyer beware) if you are considering any used sample for purchase !!

The later NRD-545 Receiver (plus the JST-145 and JST-245 Transceivers) uses a negative LCD with a "CCFL" (cold cathode florescent tube) back light. With it's ever increasing age are also subject to become weak and in time total failure. Just as with the more elder JRC sets , parts and repair from JRC are no longer available. So once this tube fails, it becomes a computer controlled only receiver unless a owner workaround is figured out (some other way to back light the LCD and or substitute parts) ??

A general reminder, as it goes with all vintage "solid state" radio receivers / transceivers one should be aware any major ills of any certain used model before a purchase. Check it out throughly before and then cross your fingers after.


We had a AOR AR7030's power supply fail. In our case was getting a BAD hum when turned off. Also the normal "thump" that happens when turning it off was no longer . See the AR7030 web page for more information (located about 3/4 way down the page), includes a few pictures . 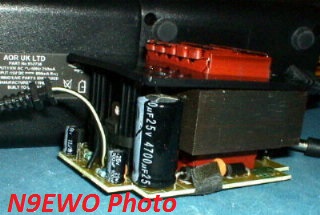 The stock AOR AR7030 power supplies are prone to failure (heat stress), the main filter capacitor is the first thing to replace. . See the AR7030 web page for more information (located about 3/4 way down the page) .


1. With the radio OFF and showing the regular power off screen. 2. Press and hold down the [AM BW] button 3. After a couple of seconds it will do a display test and turn on all segments and annunciators. 4. Continue to hold the [AM BW] button down. 5. After another couple of seconds the 4 digit display area at the upper right of the LCD (not the main frequency display digits) will briefly show a four digit number.


This appears to be the firmware version. However this did NOT work with our 2011 made sample. But did with our early "hissy" 2014 one (display as 3808). Jack's newer 2015 sample displays 3809. Our 2014 sample suffered badly from excessive audio amplifier hiss (in ONE channel with headphones and from the speaker). Was not just with my sample being defective as it this hiss bug has been reported elsewhere in good numbers.  But not with the 2011 test sample (is totally clean) hiss is ZERO. But Jack also tells us that the excessive hiss is ZERO with his his even later sample. Also other reports I have received from readers with LATE 2014 made samples and beyond are also now hiss free. So it appears that Tecsun has made quality control corrections to at least late 2014 samples and beyond ?? Our thanks to Jack W8ADQ for this information.
Increased “Off” Battery Life with "Grundig G2 Reporter"
and Degen DE1126 - DE1127 - DE1128 - DE1128H

As out of the box default , when “OFF” , the Degen made Grundig G2 Reporter / Degen DE1126 / DE1127 / DE1128 / DE1128H portables have greatly increased standby current consumption for the clock display (when the tuning knob is rotated). So even when not being used the internal lithium battery charge will be completely depleted in a few weeks without even ANY use (this is normal).

To GREATLY improve battery life when “OFF” :

1. : Access the “System Set” menu (System Setting)
2. : Then select the “Power Off Mode”
3. : Toggle the default “Standby” setting over to “Sleep” mode (called “Hibernate” with some Degen sets).

This will greatly increase battery life when “OFF”. Note: The clock will no longer be accessible with the “Sleep-Hibernate” selection (when turning the encoder knob). Also, if you remove the battery (or it goes totally dead) this setting will have to be redone, as it then defaults to "Standby Mode".


After years of operation the Kenwood R-1000 (our review can be seen here) can suffer a fixed 39.545 Mhz display and/or a dead radio/display (or it can just go wacky). First place is to check and re-solder solder joints at Q201 and Q203 on the small power supply / PLL board on the underside of the chassis. This is where connector # 12 is located. The two TO-220 devices mounted on the large heat sink and the PC board solder connections can work loose after many hot/cold cycles.

Just as important, be sure and touch up the solder joints involving connector # 12 and the four power rectifier diodes as well as these can cause for bad connections too. Especially so with pin one and two on connector # 12 as these are 5 volt pins closest to the heat sink. In extreme cases all electrolytic capacitors, Q201 and/or Q203 and/or the 4 power rectifiers may need to be replaced on this board. Beyond this, I cannot be of any additional help.