If you cannot see the full index shown on the left edge of your screen, please go to my main page at

50MHz is probably the easiest VHF band to achieve regular long distance (DX) communications, but radio conditions can vary tremendously depending on the time of year and the solar cycle. The best time of year is from MAY to AUGUST during the Sporadic-E season, where with low power and simple aerials anyone can work most of Europe up to 2,300km distance from your station and with very strong signal strengths in both directions.

Double hop Sporadic-E is sometimes seen in the Summer with distances in the order of up to 4000km to areas like Israel (4X) or the Canary islands (EA8). Some distances worked when at solar minimum in June and July 2007 have been in the order of 6000km to parts of the USA; is this triple hop Sporadic-E or something else such as the less well known Short-path Summer Solstice Propagation (SSSP)? It cannot be F2 layer reflections as we are at solar minimum in 2007.

However, outside of the summer months conditions can generally be poor and the band appear totally deserted. There are exceptions as at the maximum of the solar cycle when 50MHz signals are reflected by the F2 layer just like on HF and it is possible to work all continents including Australia! The pileups can be frustrating to break though.

Also it is possible at all times of year to work stations in Europe up to 2,300km away by bouncing your signals off the ionised trails left by meteors entering the Earth's atmosphere. You will need WSJT software and a computer linked by a soundcard interface to your USB transmitter, but there is plenty of Meteor Scatter activity, most mornings and evenings, around 50.230 MHz using JT6M mode. You will also need a directional aerial. N.B. 50 MHz is considered poorer than 144 MHz for tropo scatter communications.

One of the very best and easiest ways to work DX from the UK on the 50 MHz (6 metres) band is via the Sporadic E propagation for which the season usually occurs between May - August each year. With low power it is possible to work all over Europe via single hop or as far as Israel and Cyprus via double hop propagation. Many theories exist for the cause of Sporadic-E propagation such as thunderstorms, lightning and wind shear.

In 2011 there remain a few Band 1 TV transmitters in Europe that can still be used to monitor for Sporadic-E openings, before they appear on the Amateur Radio bands, due to their very high power levels. The TV station in Prague, JN79 locator square, on a carrier frequency of 49.740 MHz CW being very useful. The Sporadic-E clouds are often associated with thunderstorms. 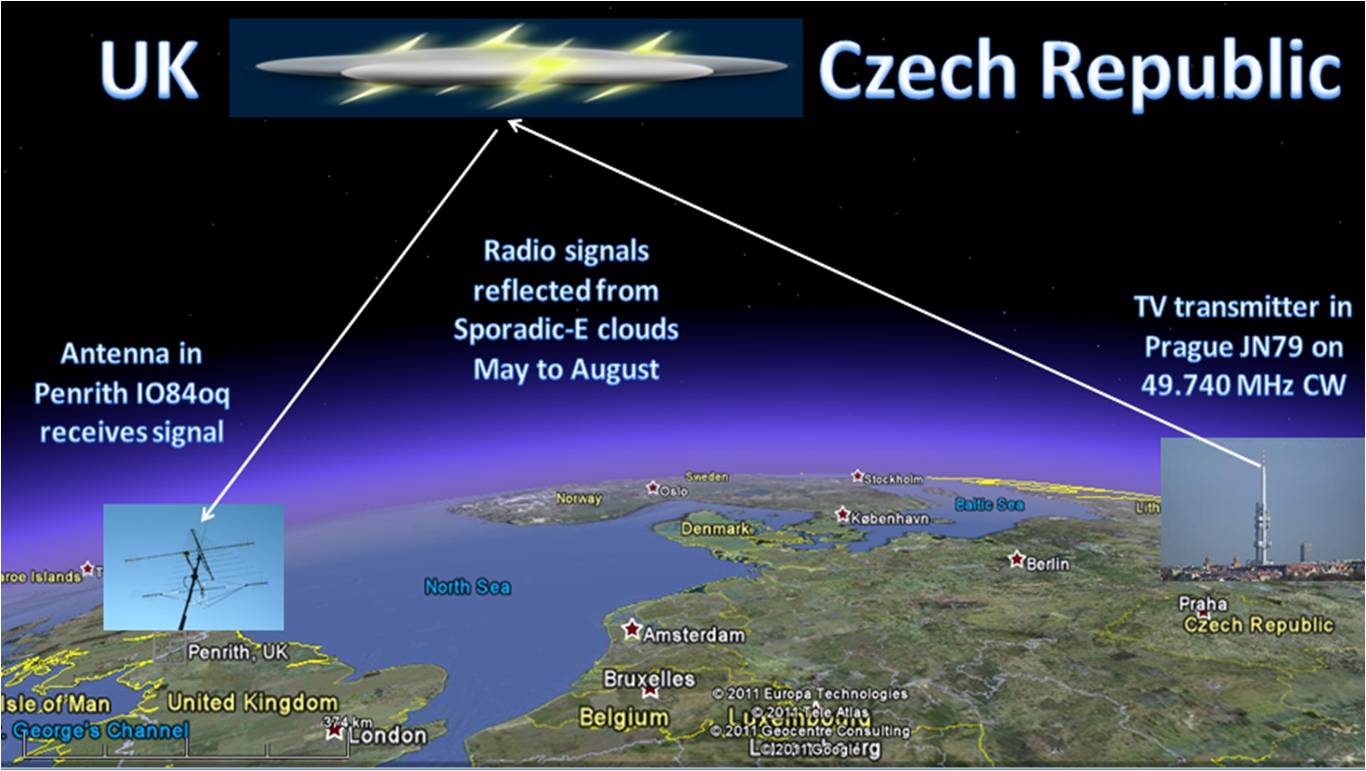 On the evening of Tuesday 1st August 2006 at around 1930-2030 UTC there was an intense Sporadic E opening from the UK in the less common direction of Scandinavia. Shown below is a map indicating the DX being worked from the UK. There is a distinct concentration of reflecting areas just to the West of Denmark over the North Sea. 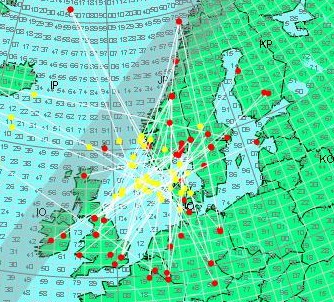 When I viewed the animated lightning map for Europe, I was able to observe that throughout the day there had been multiple lighting strikes near Denmark and therefore thunderstorms. This would appear to confirm that there might be a link between the two.

In my experience by far the best way to monitor band conditions on 50 MHz is to monitor Band 1 VHF TV video carrier frequencies. These television transmitters often use many kW's of Effective Radiated Power (ERP) and signals can be detected before weaker amateur radio transmissions. In Navacerrada, Spain the TV video carrier on 48.250 MHz CW, locator square IN70, was, until 2010, almost always be heard here in the UK when there was the slightest Sporadic E propagation, it could be heard as pings via MS reflections at all times. The map below shows some historical stronger 100kW+ TV transmitter sites in Europe, together with their channel number from 1-4, their ERP in brackets and their polarisation h - horizontal or v - vertical. 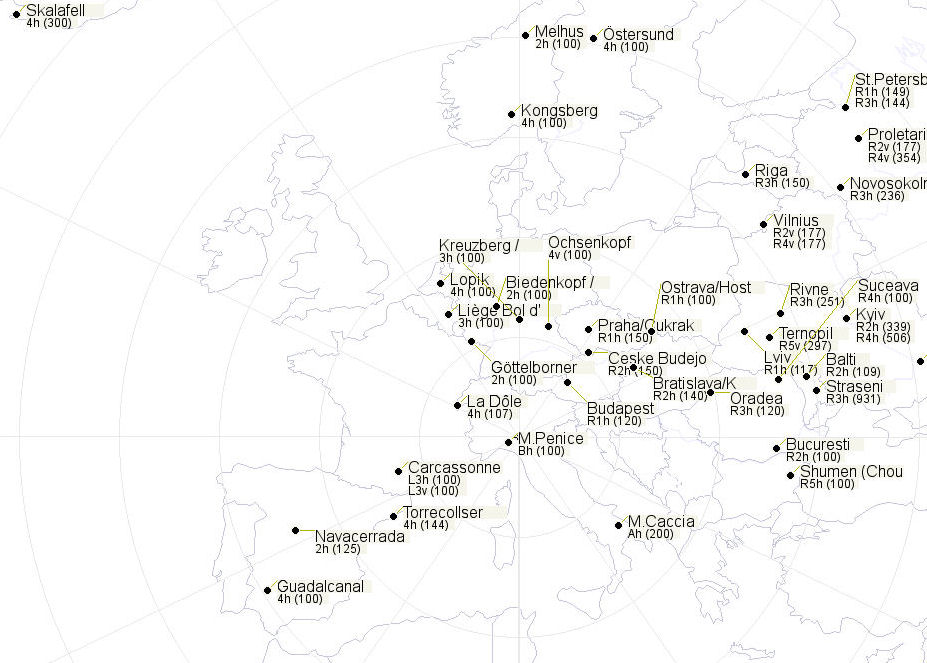 N.B. I have been advised from several sources, over the last few years, that Spanish Band 1 VHF TV transmissions would eventually cease as UHF TV takes over, although I was still receiving these transmissions in 2007. The latest information I have is that analogue TV in Spain has finally ended in 2010.

Most European Countries are closing down their Band 1 TV transmissions, so time is running out to monitor the signals as 50 MHz propagation indicators.

Below is a table of Band 1 TV carrier frequencies, which I always used to monitor and which will showed Sporadic E propagation before it appeared on the Amateur 50 MHz band, due to the extremely strong TV RF power levels measured in kW.

When the F2 layer is open on 50 MHz early warnings can be made by monitoring an Australian, Queensland TV video carrier on 46.171 MHz CW (power 300kW) or an American TV video carrier on 55.250 MHz CW. These will not be heard near solar minimum. I was able to receive the Australian TV carrier back in 2001. The tables below show the Band 1 TV video carrier frequencies, which can be heard on amateur radio transceivers using CW mode and sound like a constant carrier.