The 144 MHz (2 metres) band is the mainstay of the VHF bands around the World. It is on this band that most radio amateurs will have their first QSO and it is here that most local contacts will take place on FM. However, this band also offers some excellent opportunities for DX (long distance) communications using exotic propagation modes such as aurora, Meteor Scatter, Tropo Ducting and Sporadic Es to mention only a few.

The 144 MHz (2 metres) band is the mainstay of the VHF bands around the World. It is on this band that most radio amateurs will have their first QSO and it is here that most local contacts will take place on FM. However, this band also offers some excellent opportunities for DX (long distance) communications using exotic propagation modes such as aurora, Meteor Scatter, Tropo Ducting and Sporadic Es to mention only a few.

The key to working long distances on 50, 70 & 144MHz is often simply knowing when band conditions are much better than normal, and knowing on which frequency the DX stations are operating. In recent years DXcluster sites have greatly assisted to identify openings and there is now available an excellent piece of software for Live MUF (Maximum useable frequency) monitoring in the form of LIVE MUF V.7 by G7RAU & EA6VQ. 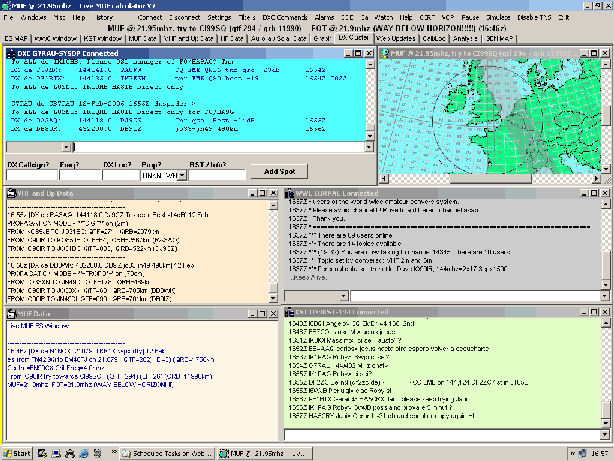 You can watch on a live map the DX paths being plotted and see the location where the Sporadic E ionised region/cloud is located. It is where all the lines intersect. Seeing the MUF rise to over 50MHz, then 70MHz, then 100MHz you will know that there is a good chance of the MUF reaching 144MHz; you will also know in which direction to beam and you could be the first to work the DX!

Today, Friday 14th July 2006, I was able to observe this in action. The screenshots below were saved by me to show you some of the functions of the LIVE MUF V.7 software. The red dots indicate spotting stations or DX stations, with the red lines showing the 144 MHz path between them. The yellow dots show the 1/2 way path point. The mode of propagation here is Sporadic E. As you can see there is a clear grouping of yellow dots over Switzerland, this is where the Sporadic E reflecting area was located. 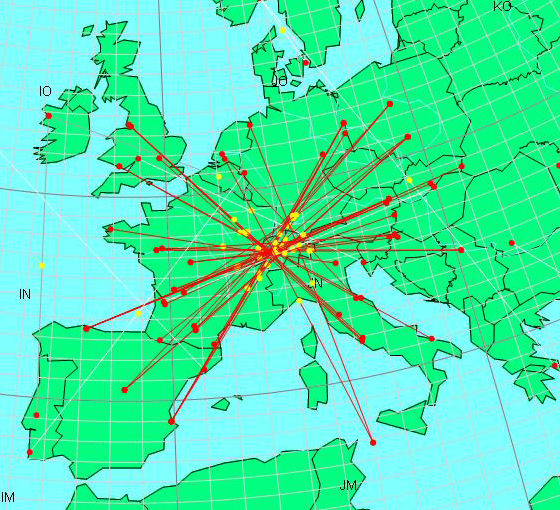 The smaller average MUF graph below, shows the average frequency the MUF reached (for the same period as the previous map) with the frequency scale up to 200 MHz shown to the left and for the last 60 minutes. The asterisks show the maximum MUF a spot provided when the calculations were made. This shows that for the 2m opening above that the average MUF reached around 145MHz for 15 minutes, but that some contacts suggested frequencies as high as 190MHz might be possible. Having watched the MUF steadily rise I was able to have the advance warning I needed, but still didn't many to catch anyone from here in IO84 square on this occasion. 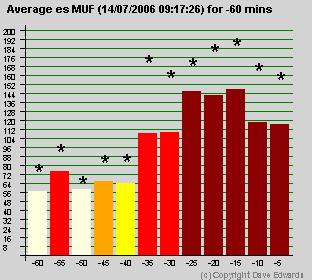 This combined software and DX cluster approach is much more likely to provide you with prior notice of major openings, than from the old fashioned way of monitoring the  2m calling frequency of 144.300 MHz or by listening to the beacon frequencies. However monitoring these frequencies continues to provide valuable opportunities for catching rare DX, if you are the first to hear it!

One popular theory for Sporadic Es used to be that they were caused by thunderstorms, however when I checked on the Animated Lightning Map for Europe, there was none apparent for the above 144MHz Es, so it must have been another mechanism. The Sporadic E cloud can often be observed to travel at very fast speeds over Europe and the peak season is from late May to early August. June and July are the best months with openings lasting from a few minutes to over an hour.

Tropo Ducting (TrD) can lead to even longer distances on 144MHz than the Sporadic E single hop maximum of 2,350km. Tropo ducting occurs when there is a temperature inversion. This often occurs when there is fog and steady high pressure over a number of days. The greater the size of the inversion duct or 'pipe' the lower the frequency that will be trapped within. This means in practice that as the inversion gets larger microwave frequencies will be supported first, then UHF, then lastly VHF. An inversion of around 600feet (138m) depth is required to support 144MHz signals. 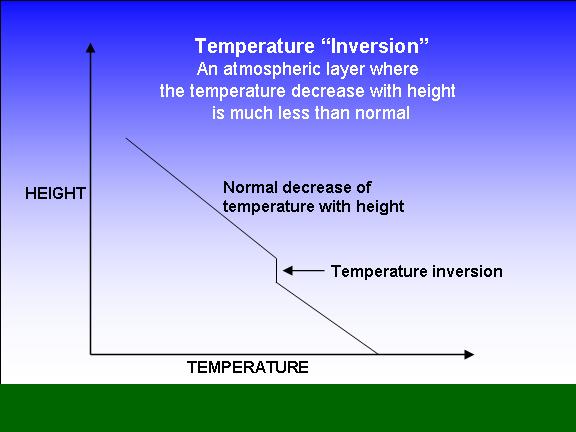 The animated image on this link (9mB file!) shows vertical wind shear for the period 11th to 16th July 2006. This covers the date of the opening above around 0900hrs UTC on 15th July 2006. I think the wind shear probability for Switzerland appears to be Low. Does this help to disprove the suggested link between Wind shear and Sporadic E, as the mechanism that permits such long distance propagation?