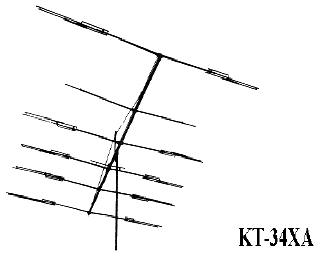 Converted to a KT34M² and revitalized.

My KLM yagi is almost 19 years old in 2011 and has survived to all heavy storms passed here in the last years,
specially the heavy one at the end of december 1999.
Due to its old age and the sea corrosion, the performance was not more significant.
In the spring of 2006 I took it down for an indepth inspection and to decide what to do.

Instead of throwing all the tubes in a corner of the garden, due to the high corrosion ,
I decided that it would be worth to give a try to the upgrade kit that M²inc.  web page   developed
and reducing its size from the six elements of the KT34XA to a more "human" four elements KT34-M².

The whole antenna has been dismantled and all the pieces have gotten their position names.  Dremel tool or alike and steel brushes
had been extensively used .
To quick remove and polish the heavy corrosion about 15 Proxxon Steel wheels - No 28952 and Steel-Cup brushes No 28953 are needed.
To polish the tube interiors are needed about 10 pieces of carbine steel brushes .
Always wear protective glasses, dust mask and gloves
as the brushes during the use lose their wires.

The pics below show some of the corrosions I found an all of the antenna joints and the melted capacitor caps.
The red dot shows the inside of the tube capacitor very clean and the same is in all of the other capacitors,
the copper shims have been added by the previous owner to reduce the junctions play, a very bad solution...


that I overcomed with a simple solution in 2002, read the report at this link


So the order was put and sometime later all the new pieces were on my table.

The cleaning work has taken almost three winters as in the mean time I have done other mods in my station too.

This pic shows the tip end of an element before and after, note the bad oxidisation and the hollows in the cleaned one.
The yellow point shows one of the screws inserted in 2002 to overcome the widening of all the straps.
Of course the screws had been inserted under all straps.

The capacitor pic shows also before and after, here the oxidisation is more severe and in a couple of them the corrosion
had come throug. Therefore all the capacitors had been reversed and self vulcanizing tape had been added for protection.

On all the cleaned points the NOALOX paste has been added.
All of the eight semi elements have been careffully mounted and each full element has been checked for the resonance .

The biggest problem in the re-building phase had showed on the meter hardware tolerances.

I had discovered that cheap hardware meters have a very bad tolerance in measures settings,
up to 2\two centimeters of difference one to another over one meter lenght.
Therefore I had to buy professional one as STANLEY's to be almost sure not to be far from the inch-to-meter calculated dimensions .

Just by luck I discovered these differences at the beginning of the antenna assembly.


The boom shortening from six elements to four is the simplest work to do : just take two pieces and put on it the measures of the
new four elements as described in the user manual .

The old hardware must be dismantled to the last small piece to check that all the pieces are ok.
I had a trouble when wanted to unslip the tip marked by the red dot,
there was nothing do the two pieces were so oxidized that it was impossible to separate.
Luckily I had the same pieces of the sixth element to take in use.


10 mt bar insulator. It is better to slip the new insulators into their place BEFORE mounting the shorting bar over the antenna tubes.
I had to do a strange work slipping the insulators after the bars were already on the tubes.