A Bumper Sticker comes to life:
Saving the Whales

Point Barrow is at the northernmost point of Alaska, on the Arctic Ocean, at lat. 71°23'N and long. 156°30'W. Visited in 1826 by Frederick W. Beechey, a British explorer, and named by him for the British geographer Sir John Barrow, it has since been the object of many expeditions and has figured prominently in arctic aviation. Navigation is open for only two or three months a year. To the southwest is the village of Barrow. Farther south is a monument to Will Rogers and Wiley Post, who lost their lives there in an airplane crash in 1935.

On October 7, 1988 as Americans were busy following the upcoming elections, an Eskimo hunter found three gray whales trapped in the Arctic icepack, just off of Point Barrow.

Possibly confused by the rather late and unseasonably warm weather conditions of that summer season, it is speculated that these whales may have been enjoying the good eating in the waters off of Barrow, and forgot that winter was approaching, becoming unable to make it out to open seas to return southward.  By late October, a full media circus was evident, and a real-life drama unfolded on worldwide TV, as authorities in Alaska along with hundreds of volunteers from all over the world worked feverishly to save the lives of these California Gray Whales.

In what surely had to be a first, an Soviet icebreaker, flying both U.S. and Soviet flags off her stern, helped in cutting a swath out to open seas, where the whales, two of which were dubbed "Crossbeak" and "Bonnet", could escape.  2 National Guard CH-54 Skycrane helicopters also got in on the act, dropping 5 ton concrete pillars repeatedly onto the ice in an effort to chunk it up, along with several screw tractors.  Eventually, over $5 Million Dollars (U.S.) was spent in the effort! 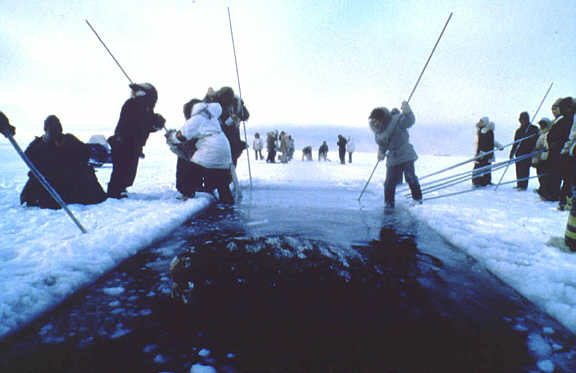 Native Alaskans participating in the whale rescue effort, clearing a channel of ice so the whales can make their way to the open sea.

Following some of these news accounts, I quickly prepared and dispatched some "event covers" (my old friend Si Steinberg used to call them "gadget covers") to the principals named, and this is what I received in the mail shortly thereafter, as a way of philatelically documenting some of the postal history of this event. 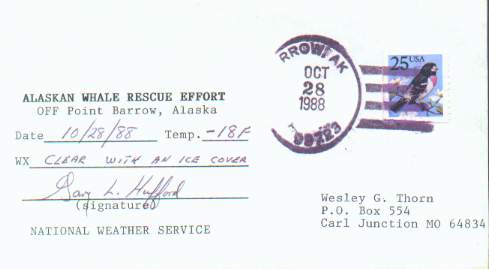 Autograph of Gary L. Hufford of the National Weather Service, who was instrumental in predicting the weather conditions that would affect the rescue. 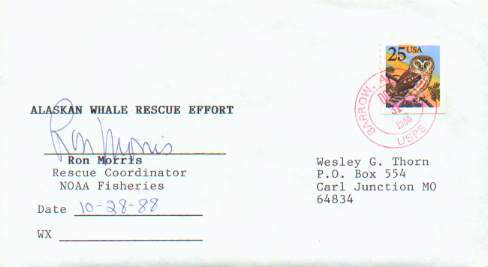 Ron Morris was the Coordinator of the rescue, from the NOAA Fisheries Division 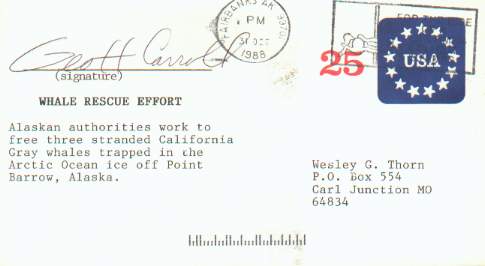 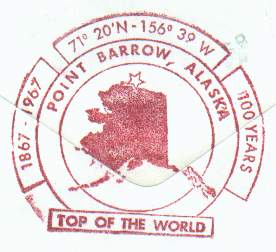 The top two covers had the Point Barrow "Top of the World" cachet applied on the back side of the envelope.

The piece dé resistance, however, had to be this enclosure! Showing true entrepreneurial spirit, the Top of the World Hotel at Barrow sold "We Saved the Whales" T-shirts; this order form was inside one of the covers. 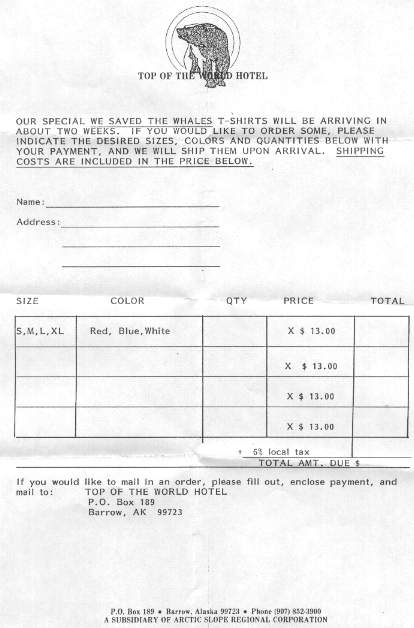 Most importantly, I think there was and is a human lesson to learn from what happened with this International effort.  Don't take this the wrong way, I love whales. I do.  But I can't help but think it is amazing how much money and energy was expended, in brutal conditions, to rescue these whales.  While it provided a nice diversion from the ongoing political races at the time, it remains sad to realize what we are willing to do for whales, yet we won't take the time or money needed to help out each other.  Poverty, elderly folks being prisoners in their own homes, hungry children... all right here in America. It's wrong.

The URL for this page is http://www.qsl.net/kg0yh/whales.htm