This cover (often seen in dealer bourses) was issued to commemorate the cruise to establish a historical marker at Point Barrow, Alaska, by the Will Rogers-Wiley Post Memorial Expedition. Rogers, of course, was the vaudeville roping cowboy and comedian/philosopher who was Oklahoma's favorite son.  He and famed aviator Wiley Post met their untimely death in a plane crash in 1935 at Point Barrow, Alaska.

I live about 100 miles from the Will Rogers Memorial in Claremore, Oklahoma, which is just northeast of of Tulsa. I highly recommend it if you are into Alaskan culture or Flight history, as they have artifacts from this crash there, as well as preservation of the life history of a truly amazing American. 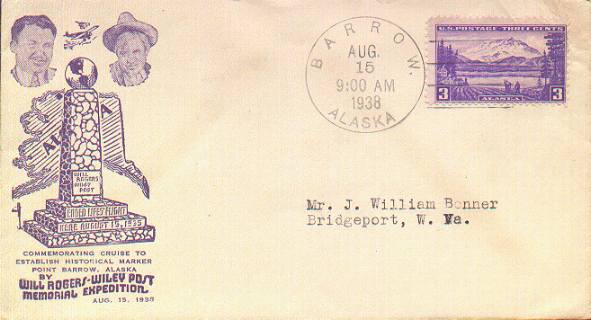 The following cover illustration is courtesy of Roy Lingen, who has a commercial site at http://www.world-postal-history.com.  They handle a lot of commercial postal history, and what makes his cover fascinating (and much more collectable) is that this example from the Rogers-Post Expedition bears three genuine signatures.  If anyone might have information as to whom these gentlemen were, and how they were connected to the Memorial Expedition, please let me and/or Mr. Lingen know.  We would like to find out what connection exists, if any.  My guess would be that they were somehow connected with the memorial effort; perhaps as committee members, or that they might have been postal officials or other dignitaries present at the dedication.  It is also possible they could have been the philatelic sponsors of the cachet; since the 1930's was the heyday for cover making.  The signatures appear to be contemporary, i.e. they are in fountain, vs. being in ballpoint, so they appear to have been penned at or about the same time as the postmarking in 1938.  The cover appears to have a duplex marking on the back, probably as a receipt marking. 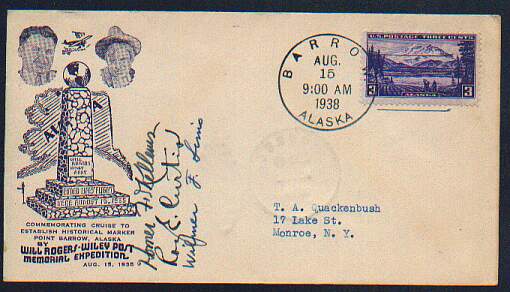 Close-up of the signatures on the Lingen cover

More to follow, including last day of the 49-star flag covers.