Finn Ronne was a Norwegian immigrant who later joined the United States Navy and was a member and officer in Admiral Byrd's earlier expeditions to Antarctica. In 1946-8, he led a privately-financed expedition to Antarctica, following upon the heels of Operation Highjump.  Ronne's expedition was to the Marguerite Bay area, where he reoccupied Byrd's 1939 Base.  One of the most important results of this expedition was a showing that the Antarctic peninsula was connected to the rest of Antarctica, thus solving one of the last great public mysteries of the continent.

Writing in his book entitled "Antarctic Conquest", he stated:

"Although no one knew it, I had been operating a United States Post office too, but for reasons of state (emphasis added) had been compelled to keep it secret."

Secrecy seems to be in no scarcity as it relates to several Antarctic expeditions; perhaps in no small way due to a continued concern that the Nazis had a remnant left in Antarctica from their infamous 1938-9 "New Schwabenland" colonization of Antarctica.   Note carefully the Swastika in the following photo of aircraft aboard the Schwabenland, the vessel that took them south. 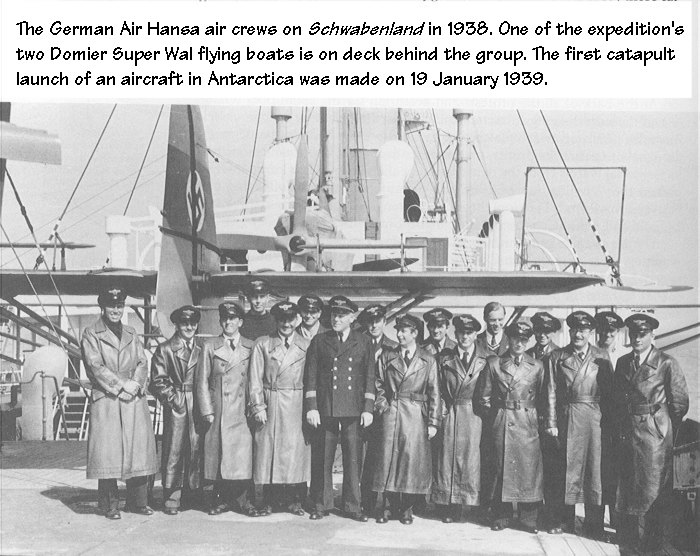 (Photo source unknown, and is presumed to be in the public domain)

The web is abundant with sites setting forth information about suspected and actual German involvement in Antarctica possibly dating back even to the late 1800's.   It does make one wonder if there were in fact, covert or as they say today, "black-ops" reasons for one or more of the Byrd Expeditions (including Operation Highjump for this discussion) as well as the private expedition of Captain Ronne.

Many online sources are available with information concerning what I have dubbed the "Byrd Conspiracy", which was not a conspiracy by Admiral Byrd, rather what may have been an apparent conspiracy by the government to keep particular information that he had uncovered during Operation Highjump, as a secret.  I am not passing judgment at this time, as I am still investigating the whole thing to my satisfaction.

However, lending credence to this conspiracy theory is the observation that Admiral Byrd does in effect seem to "disappear" from public view shortly after his return from Operation Highjump in 1947-- until approximately 1955 when he organized Operation Deep Freeze I,  and he was reported to have been hospitalized (in a mental ward) shortly after his return in 1947.  This forced hospitalization is said to have came upon the tails of Byrd having made some remarkably candid comments (which included what smacked of being a description of a UFO) to a South American newspaper about what he had found during Operation Highjump.  His disappearance from the scene after his arrival back in the states, would make it appear he may have been promptly squelched!

Remember that this time period coincided roughly with the Roswell UFO sightings.  Operation Highjump would have been first, early in 1947, and then Roswell to follow in the summer of 1947.  This was a situation that was the last thing the government would have wanted, another military official (in this case a quite prominent and popular man who had spent years criss-crossing the United States giving lectures and whose word would have been quite respected and accepted) who apparently reported having seen/and or believing in UFOs!!

NOTE:  If Op HJ had continued to its full expected duration of six to eight months, they would have still been in Antarctica at the time of Roswell.  The expedition headed back to the U.S. in early 1947, well short of its expected ending.  Some would say "limped back", after suffering great losses of personnel and equipment.  The official record only sets forth a limited loss of life and aircraft, but conspiracists feel the record has been doctored, or we are not being told the full story.

Contrast this lack of public accessibility after Operation Highjump, to the previous well-known availability of Admiral Byrd in the period following his first two Antarctic Expeditions, where there are documented philatelic items from cities all over the country serving as commemorations of where Byrd visited lecturing to the public about his travels in Antarctica.   That Byrd loved to travel and lecture about his polar explorations is quite evident.

The polar regions and his expeditions were his very reason for existence; he had said from the time he was a child that he felt destined to be a polar explorer.  He had a passion for all things polar, especially exploration, that could scarcely be contained.   Operation Highjump was at least as important in many respects, it would appear, as his previous expeditions... so where was he after his return?  Where did he go?  Was he locked away so he couldn't share the story of what he really had found in Antarctica?  As some theorists suggest, during Operation Highjump, did he encounter and engage Nazi forces operating from bases that lodged advanced aircraft with advanced propulsion systems?

Many think so, and I am beginning to see some curiosities about many aspects of Operation Highjump and now, perhaps even with Ronne's Expedition.

The little tidbit mentioned above that Ronne forked us in his book, only begins to tell us why the Oleona Base, Antarctica postmark is one of the rarest polar cancels that exist.   With this being the first American post office established on the Antarctic continent, it is a shame that the cancel was not used more often.  Is there perhaps a larger reason why this post office was kept secret?  We do know that many countries, including Britain, had concurrent secret bases and or expeditions in the same general time period, notably Port Lockroy on the Antarctic peninsula.  Port Lockroy was part of a top secret World War II British expedition called Operation Tabarin.

Operation Tabarin was the beginning of Britain's permanent presence on the Antarctic continent, and was built to serve as a southern outpost and to keep an eye on suspected Nazi presence on the ice.   In a 2001 BBC interview, one of the last remaining survivors of that secret expedition, Gwion Davies, noted that the posting of mail from their secret base was a way of their laying claim to, or establishing that section of Antarctica as British sovereign territory.  In other words, just as the Nazis are known to have dropped metal dart/ markers with the Third Reich swastika emblem over a large area of Antarctica during their expedition in 1939, to act as a laying of a claim; for any country (such as Britain) to have a post office that actually accepted and postmarked mail definitely shows an intention on their part of not only establishing a base, but of staying.

While the United States did not then, and does not now, recognize any country as having specific territorial claims upon Antarctica, for Ronne to have allowed his expedition members to have open mailing of letters from Oleona Base would have served a similar purpose as with Port Lockroy, but for some reason, he would not allow that to be done.  Why?  Some mail did escape, and other mail from members of the Ronne Expedition is known to have been posted from nearby British bases.  The posting of mail often serves a geo-political purpose in addition to the simple fact it carries mail back home to loved ones; and it is a great curiosity to many polar philatelists and followers of Antarctic history that it was not done in this instance.  The full story about the existence of the post office (as well as even greater secrets?) may have passed with Captain Ronne.

The "Holy Grail" of Antarctic Covers

Click on the above image for a larger view; copy of cover was provided courtesy of Scott Smith

The Oleana Bay covers are most commonly seen with a date of March 12, 1947, which was the date the expedition arrived at Marguerite Bay, Antarctica.  In this instance, the cover illustrated above is extraordinary in that it is on a printed envelope from the Byrd II Antarctic Expedition, postmarked with the less common hand cancellation from that mission; then repostmarked at Oleana Base in 1947, with the addition of Captain Ronne's "corner card" and the IGY Ellsworth Station octagonal cachet, and the best part of all, Ronne's signature in which he adds the word "Postmaster", rounding it out to make a splendid cover!  A cover like this would fare extremely well in a polar auction.   I would go so far to term it as the "Holy Grail" of a polar collection; only very few covers I can think of would be more collectable, in my opinion.

The following is another Oleona Base cover from the personal collection of Captain Ronne which was sold in 2009 to a European collector.

The URL for this page is http://www.qsl.net/kg0yh/oleona.htm