As preparation for the International Geophysical Year of 1957 (IGY), the Arctic Ocean Study Program, which was under the National Committee for the IGY, launched Project Ice Skate.   Initially they would use two floating Arctic Ocean ice stations ("Alpha" and "Bravo") as platforms for conducting scientific research: meterological and oceanographic data collection.   There was also a third one called "Charlie".    The records show that the familiar ice island I mention on my main Ice Islands page, T-3, was not the first Alpha station.  One might have thought it would have been, but at the time they did not consider it to be in a good enough location for their purposes.  The first "Project Ice Skate" drifting station was established on April 15, 1957 on an ice floe at 79º N, 159º W.  There is some degree of difference found on the exact date, ranging all the way from March to June 1, 1957.  It is well known that scientific research was underway in June of 1957, so one would think that they would have had to have set up camp in May.  The station on T-3 then became "Bravo" being that "B" is the second letter of the alphabet in military phonetics.  If Fletcher's Ice Island had been in the position they wanted earlier in the year, it likely would have been occupied first under the Ice Skate program, and thus would have became "Alpha".  Confused? So am I, so let's move on...

As I discussed on my main ice island page, there are also philatelic cachets (less seldom seen) which bear this or similar cachets from the USAF Ice Skate Drifting Station(s), first Alpha and later Alpha 2.  There are a multiple of cachet types and combinations of both Alpha and Bravo and T-3 markings, making it hard to keep them sorted, or even to know which ice island we are talking about.  To my knowledge, no one has catalogued all of these markings to any great extent.

There was a rendezvous near the North Pole between Drifting Ice Station Alpha and the submarine, U.S.S. Skate,  at 85º N, 136º W, on August 14, 1958, with Alpha having already been well established by that date.  The leader of the military operation at that time was Major Joseph P. Bilotta.  Commanding the Skate was Commander James F. Calvert.

There are two varieties of polar covers honoring that rendezvous, both extremely rare!  One was marked with a Drifting Station "A" marking and a U.S.S. Skate Polar Ice Cap Cruise cachet and others had only the ice island markings, including a cachet that read Ice Skate 1957.  Some covers were mailed from APO 731 in Seattle, and other mail was held at Alpha for later transmission, and ended up being postmarked from New York, NY.  I would be interested in having any philatelic item from the rendezvous for my collection; please send me an e-mail if you have such material. 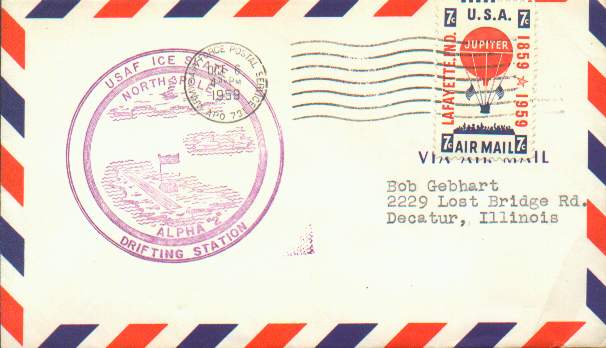 I find it interesting, politically, to note the prominence of the American flag in this particular cachet design; [quite similar to the USS Burton Island Arctic Re-supply cachet of 1961] remember that this was the era of the Cold War between the United States and the Soviet Bloc countries... America was wanting to make its presence in the Arctic regions known and seen!!  Servicing philatelic covers was in one sense, a tangible way of doing that, and one should not overlook the political implications of something as simple as the posting of souvenir mail for collectors.

Given that the cachet has the wording "North Pole", as well as "Alpha 2", my feeling is that obviously, these were completely separate ice island(s) from Fletcher's/T-3.  If a reader of this page has more information, I would welcome hearing from you so I can update my information thereof.

Back to My Ice Islands Page