A Study of Mail from Ice Islands; featuring T-3

Colonel Joseph O. Fletcher was the Commanding Officer of a U.S. Air Force weather "Ptarmigan" squadron  stationed in the Arctic right after WW II.  In 1946, a large tabular iceberg was discovered, which was basically a large chunk that had broken off the Arctic ice shelf (Ellesmere Island Ice Shelf, to be precise) and had gone adrift, often locking in the ice pack.  This "ice island" was codenamed T-1, taken from its original radar designation as a target.   Subsequently, during further weather reconnaissance flights of the "Ptarmigan" squadron, there was yet another ice island spotted which was designated as Ice Island T-2.

Fletcher's Ice Island T-3 (the official designation) was a very large ice chunk, being a large fresh-water segment of a former glacier, that was seven miles in length and riding about fifty feet higher than the surrounding icepack.  It was easily large enough to land a plane on.  T-3 had once been reported to have first been identified during World War II, and there are conflicting reports as to when it was actually "discovered".  It is felt that one such ice island had, almost fifty years earlier, deceived polar explorer Robert Peary, leading to the placement of "Crocker Land" on the map.  At least one polar party counted on finding land where the map showed Crocker Land to be, and perished as a result.

On March 19, 1952, the U.S. Air Force led by Colonel Fletcher and some scientists landed on this ice island in a C-47 aircraft, setting up a weather observation station.  Fletcher established a research station that was manned at this big ice sheet for roughly the next 25 years, despite a grim quote given by the head of the Alaska Air Command at the time, a General Old, who was quoted in a Life magazine article of the time as saying "I don't see how any man can live on this thing."

As you will see, he was a bit premature with that comment.  In May 1953, under sponsorship of the National Geographic Society, Colonel Fletcher and another scientific team made the first-ever landing at the North Pole.  Philatelically documented flight covers do exist of that event and are extremely valuable and rare; very seldom if ever seen in auctions.

Fletcher's Ice Island, and the research station that was located on it, rotated in circles in the Arctic Ocean, floating aimlessly along in the Arctic currents in a clockwise direction.

The station was inhabited mainly by scientists along with a few military crewmen and was resupplied during its existence primarily by military planes operating from Barrow, Alaska.

The first occupation of T-3 was from March 1952 to May 1954, and the second occupation was from April to September of 1955.  It was reoccupied in 1957.  The station operated under (at least?) three names over the years; through the first two occupations it was known and designated as "T-3" and later as "Fletcher's Ice Island T-3", but with the third occupation, it was at that time designated as "Bravo".

During the period of active habitation, T-3 covers were serviced, each stamped with a variety of hand-stamped cachets and markings, dated, and often marked with a manuscript notation of the geographic position of the drifting station on that particular day of ops. The T-3/Bravo  covers were often cancelled at Barrow or at a USAF base in Alaska, and then placed in the mailstream.   Covers exist with both Drifting Ice Station Bravo and Ice Island T-3 markings on the same cover, which leads to confusion on the part of novice collectors.  As a general rule of thumb, the floating chunk of ice was called by its designator T-3; the research camp that was built upon that ice island was called Drift Station Bravo.  Covers are also known bearing the cachet "Operation Ice Skate"; see my separate page (link given below) with information about that United States Air Force project.

As a curious finale to the history of this chunk of ice, T-3 was actually "misplaced" for a time... in a science report headlined "Researchers find missing ice island" from the Associated Press, datelined Washington, D.C. of July 3, 1983, it was noted that government scientists had rediscovered T-3 after it had been missing for six months.

Their discovery came apparently just in time for them to witness the melting of the relatively small ice block of fresh water ice floating in the Arctic, according to the NOAA.  The 7-mile by 3-mile island was spotted near the North Pole by researchers studying the haze that forms over the Arctic during the spring and summer. (I happened to be able to philatelically "document" those particular NOAA flights by Pilot Dave Turner; see my AGASP page for further information.)  The article also noted that when T-3 was finally abandoned after being used for a quarter century, Fletcher's son, Joseph Fletcher, Jr., had been a member of the party closing the facility.

Fletcher senior, who retired in 1983 from NOAA, said that he thought the island would not last much longer.  Fletcher predicted that in the next few months (after that story was reported in 1983) that T-3 would drift out of the Arctic Ocean to the North Atlantic, where it would melt.    Before the era of satellites, the research station on T-3 had been a valuable site for measurements of the atmosphere in the Arctic.  Satellites had been used to keep watch on the island since it was abandoned, but meteorologists had lost track of T-3 in the fall of 1982, which prompted them to make a request to the NOAA flight research team conducting the ozone experiments to keep an eye out for T-3.   NOAA pilot Dave Turner, who was most assuredly one of the last persons who saw T-3, related that the island was found about 150 miles from the North Pole, locked in the pack ice.  T-3 was easy for the pilots to spot as its surface was distinctly different from the surrounding ice because structures, oil drums and the remains of a C-47 aircraft wrecked years ago were still visible.    Dr. Fletcher reported to the AP that the kidney-shaped island had broke off from the Ellesmere Island ice shelf many years earlier, and was much stronger than the surrounding salt-water ice pack, but that nonetheless, T-3 was at that time about one-third of its original 160-foot thickness.     We can only surmise that sometime after July of 1983, T-3 subsequently worked its way to the outside edge of the Arctic ice pack; where it caught a current to the south, drifting off into oblivion in the Atlantic Ocean, eventually melting away.

T-3's weather shack and the primitive conditions of an ice camp circa 1957, was quite realistically depicted in the Artcraft cachet for the United Nations Meteorological stamp.

Go here to see the earliest example of a Drift Station Bravo cover I have in my collection, signed by the Commanding Officer, Marshall G. Gassenmiller, Lt. Col, USAF, Commander, Drift Station BRAVO.

Reports of earlier usage of the Drift Station Bravo cachet are appreciated. 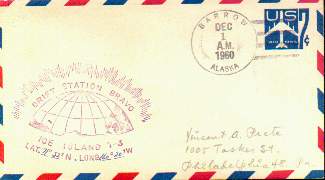 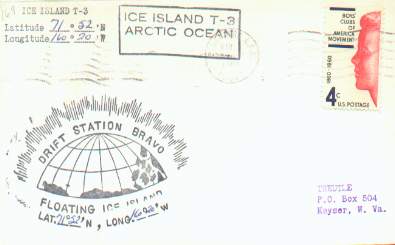 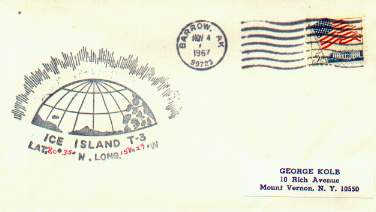 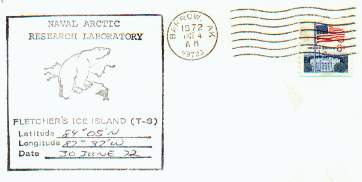 According to the documentation on the first cover illustrated, AIDJEX was established in 1972, and there were a series of continuing ice stations for subsequent years, all retaining the name of AIDJEX.  For clarity, references to specific research years are sometimes seen notated such as: AIDJEX '72, AIDJEX '73, and so on. 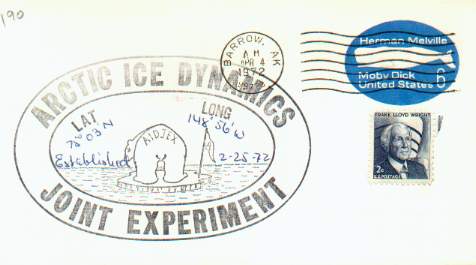 The above envelope bears the writing of Rolf Bjornert, who was the Field Operations Manager for the AIDJEX project from 1971 to 1976.
Rolf was kind enough to give me permission to publish several photographs from the project.  Note that this cover bears a cachet that is identical to the official patch of the project.  The following patch was designed by Eddy Carmack, who at that time was affiliated with faculty of the Oceanography Department of University of Washington.

Rolf noted that he operated from AIDJEX as WA7LAB and that he often ran phone patches for the scientists involved in the project.  Otherwise, they did a lot of operations on the 20 meter band. In the following picture, he is showing operating from the radio shack at AIDJEX. 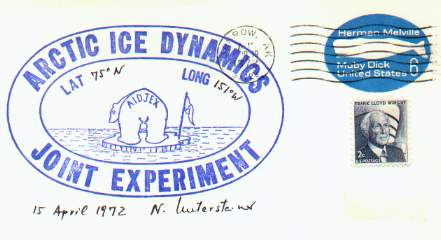 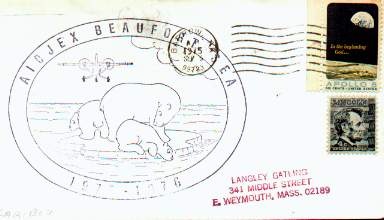 This is the official 1975-76 patch for the AIDJEX Beaufort Sea Project, courtesy of R. Bjornert.

The 1975 AIDJEX project was a 14-month experiment which studied air-sea-ice interaction out on the pack-ice north of Barrow, Alaska.  It was officially established at 76º 20' N / 140º 50' W on March 13, 1975. Rolf included this photograph of supply delivery to AIDJEX.

AIDJEX Main Camp in the Spring of 1975, showing an Alaska International Airways C 130 Hercules and a USN R4-D (in civilian terms called DC-3) which were used to deliver camp equipment, scientific gear and fuel to last for the coming summer.

A report from Canadian sources dated 10-24-1975 stated that the main AIDJEX ice camp, "Big Bear" was breaking up under deteriorating ice conditions, with one ice break being directly underneath one of the buildings.  Photographs showed the building actually straddling an ice crack--not a good place to be!  Personnel and equipment had to be evacuated to the satellite stations of Blue Fox, Caribou, and Snow Bird, all of which were within a roughly 60 mile radius of the original ice camp.

Rolf notes that in October of 1975 the Main Camp broke up, followed by safe evacuation of all scientists, and immediately an onset of dismantling the entire camp and moving it some 40 nm to a new site. "That move was accomplished by a small group of dedicated logistics personnel, a DeHavilland Twin Otter on skis, and a Bell 205 helicopter. The big aircraft could no longer be used as we had lost the main runway during the ice breakup. We were fortunate, not loosing any lives, nor did the science program suffer more than a short interruption during the re-location. The experiment lasted until May of 1976 as originally planned." 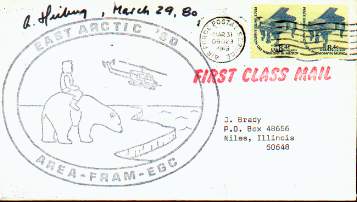 Some photographs are courtesy of Rolf Bjornert, and are used with permission. All rights are reserved by Rolf Bjornert.

The URL for this page is http://www.qsl.net/kg0yh/ice.htm