This page describes How_To overcome to a strange defect that may happen
when travelling with the FT1000MP or opening its front panel, on mkV series also.

How I discovered the problem...and simptons.

All such cases may produce a block of the buttons.

Very seldom happens that an MP stays with the buttons blocked if it rests on the table as a "Trip's Souvenir" on the chimney.
More often happens that after having opened the Front Panel(FP) of the 1kMP & mkV on reclosing it all the buttons are inactive ! .
why you had to open the FP is another fact.
Or some one has shaked his rig to get out that little bug, or has taken the rig in his 4x4 to the mountain.
All the cases when a strong shake is applied to the rig may produce the buttons block!

The first thing that comes in mind is that one of the flat data cables (FDC) has been stretched too much and is out of its socket.
But the FDC sockets have all a safety-switch that keeps the cables looked so the fault would never be here.
So I reopened the FP and the buttons worked again...After having opened and closed the FP some times I noticed that
there is a point on reclosing the FP that the command buttons are all ACTIVE and a millimetre closer all are INACTIVE
Strange, very strange. . . .

This fault happens when the FP is almost closed, about 1 cm before it goes into the holes to reposition in its working status.
Again VERY STRANGE.

After having tried many times to move the FP around the point were it inactivates the buttons without having a solution,
the only concrete thing to do was to call the Service for a possible help.
Of course the Service-Man, a good Old Man, had known already this BUG and the solution is very VERY simple.

He said: before you send it me AGAIN !! try that: move the white neon wires toward the left side of the HV converter.
EUREKA all functioned back again !!

No one of the FDC is guilty. But always a cable makes such BUG: it is the LCD's neon lamp power supply cable.
These are the 2 white wires going from the HV converter to the neon lamp.
These wires carry also some switching noise, which one when the wires are rest in the wrong position completely block the functionig of the Front Panel.
Look at the Wrong-way pic.When these 2 wires are rested on the right side of the FP and
when one closes the FP then a sort of NEON-RFI is inducted in the FP command cables blocking all the MP buttons.
Therefore resting the 2 white wires on the left side (looking from the front) of the neon-converter all the MP buttons work normally.

A similar bug has happened in some MPs & Fields after a shipping trip : the Neon Lamp Cable moved itself just a little.
Result: all the front panel's button blocked. The cure is always the same : opening the FP and moving just a little around the white wires cures the BUG.

You are warned : if you miss a DX don't hit the radio with an uppercut !!!
or be prepared to open the rig's front panel:

One more advice : before you open your rig be sure that no one of the lower row of buttons is blocked due to an accidental collision.

Have fun with the MP.

In the mean time you decide to open your rig, guess what is this: 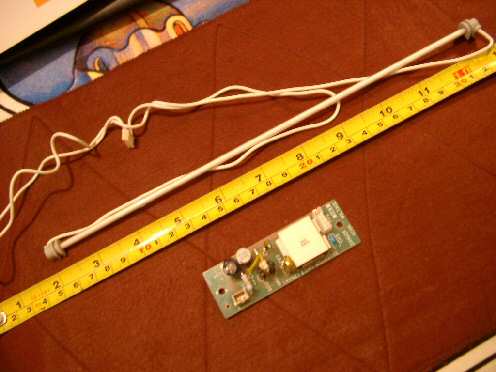 
and take a look at the MP psu spikes... 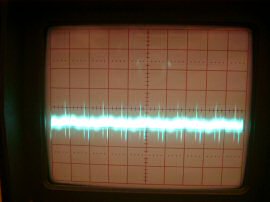 if you think that some other brand is cleaner of this one or not...


Any improvements or suggestions will be appreciated.
Write to my email on ic8pofATyahoodotcom (copy,paste and correct)
.

Back to my How To page
Back to IC8POF's index page