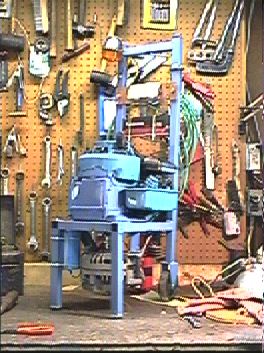 Here is my answer to a need for power at car-type voltages. This is a combination of Chrysler and B&S technology and a little homebrewed regulator. A standard automobile voltage regulator could be as easily used, but I wanted to be able to get the voltage exactly at 13.8 vdc, just like a car battery. Most automobile regulators run between 14 and 15 volts, which is a little "hot" for my purposes.

It is very straight forward and could be easily copied by anyone with a little mechanical skill. 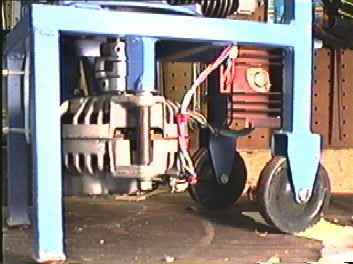 Side view of the alternator, voltage regulator and Lovejoy coupling. 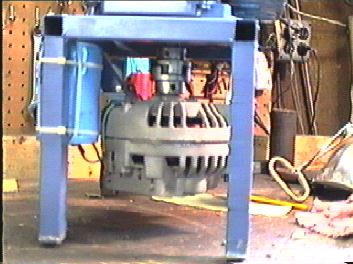 Front view of the alternator. Note the 89000uf filter capacitor (Blue cylinder behind the front left leg) used at the output to filter the output voltage.

The purpose for this generator is to operate ham radio equipment in the field. Radio static was a problem, however, I was able to shield the sparkplug wire with braid from coax. The braid was grounded inside the shroud near the magneto coil and on the sparkplug body. I have a Voltmeter and Ampmeter on the handle, along with a little videocamera battery and momentary contact switch to energize the field. The battery is charged as the generator runs.

The output is through 15' pieces of #8 wire with battery clamps on the ends.

How well does it work?

I wanted to try it out and see what it would do. Running the car off of it would surely tell if it was a good set-up or not. Well, being the technically minded person that I am, the first thing I did was to HOOK IT UP TO THE BATTERY BACKWARDS... A few brilliant sparks later, I was convinced that it passed the test, as unintended as that test was...

Having proved that it was idiot proof, I found that it would do 50 Amps with about .5 volt drop from 13.8 v. Most of that drop was across the #8 cables. I then ran some radio gear off of it, chatted with a few other hams in various states and a few in England, that confirmed that there was no generator whine or static on my signal. Works great!