The 6 meter spring sprint was sponsored by the personal contributions of K9JK. The rules and more info were provided here. Every year this single-band contest runs from 2300Z on a Saturday until 0300Z Sunday, and this year it was held on May 9-10, 2009.

I got to the hilltop (1943 feet A.S.L.) twenty minutes before the start of the contest, got the stacked pair assembled, and saw how far the mast was bending over from the wind. I considered tearing it down and assembling the omnidirectional antenna system instead, but it would have been on a separate mast that was even smaller than the 2-inch OD mast for the beams. So instead, I decided to lower the antenna stack, remove the bottom antenna, take the phasing harness out of the picture, remove one mast section, and tilt the remaining yagi up into position by itself. By the time I accomplished this goal, 45 minutes of contest time had been eaten, so I decided not to waste time taking any pictures of the modified setup.


As a result of the wasted time, I made only one QSO in the first hour, then 57 percent of my QSOs were in the second hour. At 0107 I heard VE2JCW calling "CQ TEST" on 50.110 CW. The third hour brought two QSOs, and the final hour brought a visit from a ranger, interrupting my CW QSO. With two minutes to go in the contest, I happened to have my beam pointed west and stumbled upon K2DRH EN41 on 50.130, but he was in QSO with someone already, plus he faded out within seconds. But that would have been my best DX at 789 miles if band conditions had held long enough for me to complete a QSO. I ended up operating 79 percent of the available contest time.

I spent two separate blocks of time swinging the beam through the "brick wall" to the north, but it didn't net any QSOs. In fact, none of my QSOs in this contest were the result of calling CQ. It appears that my longest actual contact was with K1TR in New Hampshire: 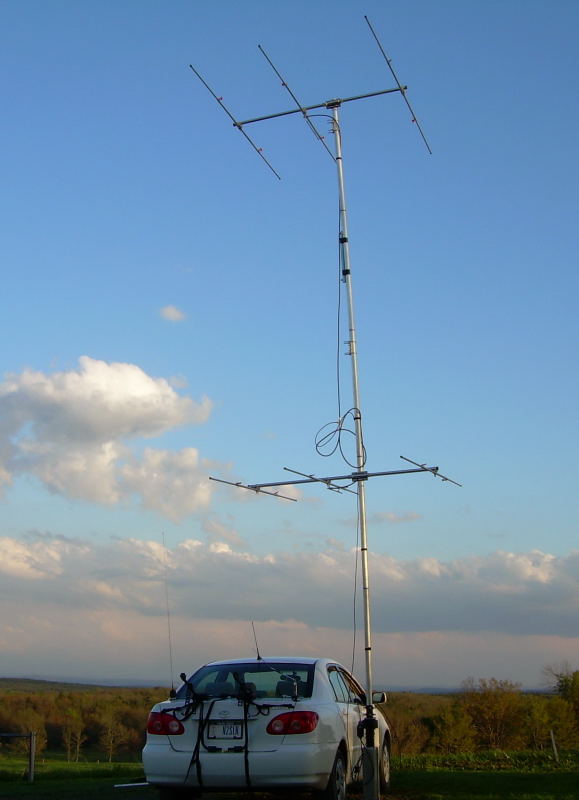