The 6 meter spring sprint was sponsored by the personal contributions of K9JK and W4SHG. The rules and more info were provided here. Every year this single-band contest runs from 2300Z on a Saturday until 0300Z Sunday, and this year it was held on May 10-11, 2008.

I brought two mast systems. When I arrived at the hilltop early, I tried setting up the stackable mast sections first since they are larger diameter. But they don't have a keyway to prevent spinning, and I didn't feel like taping the joints to secure them (not knowing whether they would hold), so I took it down. I tried the telescopic mast and the largest sliding section would not pull out. Thankfully, there was enough mast left in the smaller sections to provide me with 12 feet of stacking distance. I got beam headings dialed in on the rotor using K1MS/B in FN42 and NL7XM/B in FN20, but both were weaker than expected. With a few moments to go before the start of the contest, I was able to take a few pictures since there was still enough daylight this time of year.

I started on time and enjoyed the usual flurry of activity that the first hour brings (33% of my contacts were in the first hour, 19% 2nd hour, 22% 3rd, and 26% 4th). I spent the next half hour swinging the beam through the "brick wall" to the north, but no luck. In fact, I didn't hear a single station from anywhere between northwest and northeast during the entire contest (not even from adjacent grid FN23). But it was still great to finally have a good antenna, good elevation, and no equipment failures. I heard KB8U EN71sw one time, which would have been my longest contact at 468 miles (753 km), but then he was gone immediately. It appears that my longest actual contact was with Maryland station K1RZ who put in a formidable 5x6 signal in such poor band conditions:

Here is a list of stations I heard but was unable to work for one reason or another: K3CB FM28ar, KB8U EN71sw, W3ZZ, K1IIG FN31, N1JFU, N1JEZ FN44ar, W1ZC, KA1OJ, and W3SO. I didn't hear anything out of FN01, 02, FN23, 24, and FN33. Notably missing was K1WHS. Most worked grid was FN31 (6 stations). Here is a chart showing how that the planetary-K index equalled 2 during the sprint. The X-Ray flux chart shows that X-ray emissions from the sun were down overall during the sprint. The solar flux was only 67. 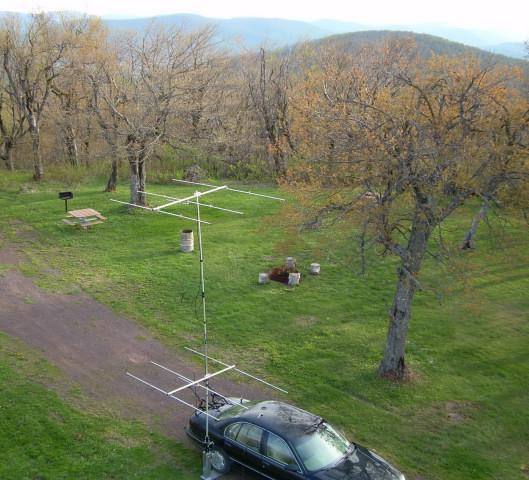