I began looking over my records and was surprised to see that I hadn't participated in this event since 2009, and never in the rover category. Earlier in the day, a Red Flag Warning was issued for the entire area due to a high fire danger (low humidity and high winds) which has been the case for many days in central NY since late March. A Wind Advisory was also issued through 6 PM local time, but high winds continued into early sprint time. The Wind Advisory mentioned "strong winds aloft" and "unstable conditions" which are cause for concern for any rover hitting the highest locations and installing antennas. As a result, the decision was made to scrap the plans for the 16-foot mast and stacked yagis, and go with a single yagi on half the mast instead. Also, the yagi I used for FM last time was unavailable because it was disassembled and stuffed into the backpack, awaiting a portable deployment in the Adirondacks later this year.

Every year this early-April single-band contest runs from 7pm until 11pm local time on a Monday, and this year it was held on April 9th. The rules and more info were provided here thanks to K9JK. Distance scoring has been used since 2010, so everyone was urged to use their 6-digit grid square to help generate accurate distance calculations. Distance scoring will boost the score of any rover who operates a long distance from the activity, so fringe-area rovers like me benefit by seeing our extra efforts become more meaningful.

My first location was in extreme eastern FN12, just a few hundred feet from the border with FN22. It's a great site, being on a summit and on the edge of a grid square--pretty handy when there's only time to activate two grids (using only hilltop locations). It was inaccessible in January as it almost always is, since the snow plows leave a 10-foot pile of snow blocking the road as they turn around just beneath the summit. There are "tree attenuators" at this site, which, of course, is a minus on VHF frequencies, but the good elevation is a plus, and the only direction with poor performance is east because the antenna this time was lower than the concrete building in that direction. There were no long-haul contacts made this time (400+ miles), due mostly to being limited to a single yagi instead of the stack, although I did briefly hear K8TQK EM89je (444 miles). Nevertheless, there were some loud stations on the air. K1TEO was 5x7 from FN31 (173 miles), K1WHS was 5x5 from Maine (263 miles--my longest contact), and N3YMS was a loud 5x5 from Delaware (240 miles). I did also hear KN4SM FM16 for a brief moment at 400+ miles away, and honorable mention goes to VE2DSB whose CW was the only signal audible from the rare northerly directions.

Tear-down was quick with only one yagi to remove and throw into the van. The coax gets rolled up and secured outdoors in order to save setup time later. I was ready to roll in five minutes. The wind had really subsided within the hour and 45 minutes that I was at this site. Got to the final hilltop (FN22) after a half hour of travel time with no radio equipment on the air. With an occupied camper only 100 feet away from this rover site, I had to assemble the antenna system in stealth mode, making no noise and using no light. Had everything up and running at 9:30 and began making contacts again. Supplied WC2K FM29mx with a new grid and he was 5x5 (I had only heard but did not work him in my previous grid). Called CQ for a while which netted W1GHZ in semi-rare FN34. Later, I worked KD2AVU FN30cs--a newly-licensed weak signal op located in NYC who worked through a difficult contact with me (weak signals and heavy, slow QSB) and did a great job at it. The reward was the completion of the QSO with 73's on both ends to confirm (not to mention he was the only station I heard active from FN30). I'll be pointing the beams that way and looking for him in the future. Official results are here. 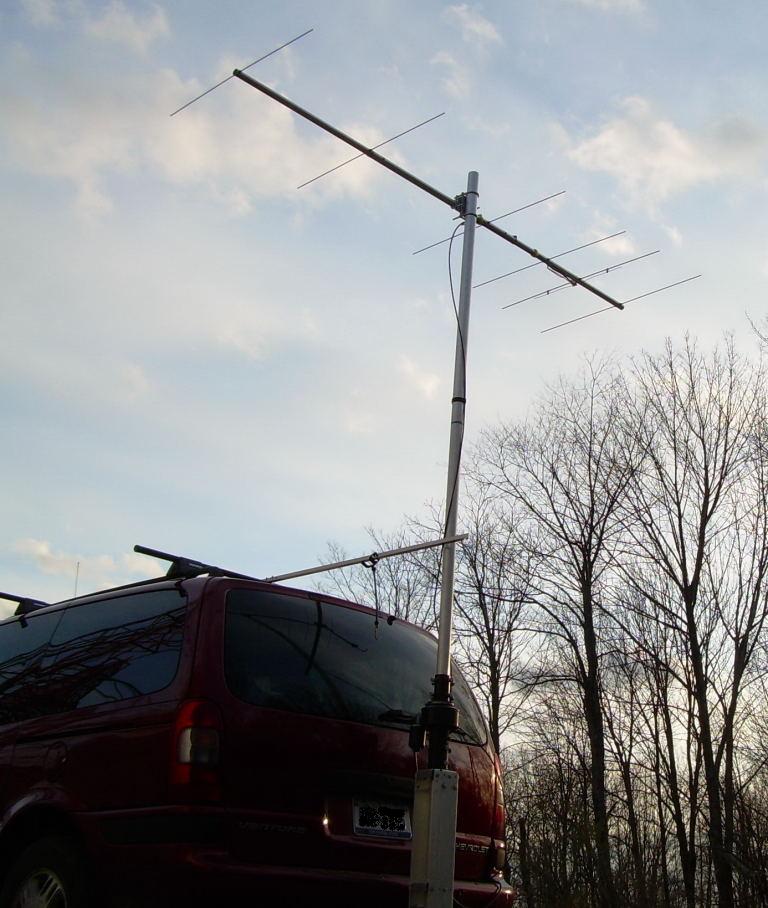