There was significant ice accumulation on the weekend before the 222 Sprint. My commercial power was interrupted Monday morning and it was out for about 4 hours, but I was one of the lucky ones--some households near the eastern FN22 hilltop that I wanted to use for the sprint were still without power Monday evening. I decided that evening not to attempt the steep and rough 2-mile access road to that hilltop with its sharp dropoffs and no guard rails. With that one crossed off the list, at 4:30 PM on sprint day I visited a hilltop in western FN22 and found that the last snow drift had melted, making the site available after being inaccessible for the 2m Sprint. When I got there at 6:30 someone was parked in the spot that I needed for my antenna system. Both driver and passenger were asleep, so knocking on the window for a quick chat was not an option! I began waiting and at 7:08 PM they left so I took their spot and began setting up. I raised a Yagi and a pair of loops. I listened on the loops, but the band was so dead that I decided not to attempt any contacts with it, and threw the antenna switch to the beam.

I recently installed a coaxial stub notch filter on the 222 MHz station. I didn't expect that to create any side effects, but with the beam in certain directions, my transmissions would temporarily "fry the brain" of the rotor control box, which would go into "preset beam heading" mode and start turning my antenna in the middle of a QSO! Thank goodness I have a kill switch on the power cord on this 12VDC rotor system. Turning the control box off stopped the rotor from turning, then after powering it back up, I had to press a button a few times to go back to normal operating mode. After a while I would power up the rotor control box just long enough to turn the antenna and then power it down again.

Band conditions were up and down throughout the sprint. One minute it was difficult to work local stations, the next minute I was working 335 miles to Virginia station KO4YC FM17. I relied more heavily on CW in this sprint than most--68 percent of the contacts were on CW. I seemed to work groups of stations in the same grid, so the variety of grids just isn't going to be there this time. One interesting event was the 3-person pileup of stations from FN31 calling me on CW. Being only an average CW operator, I had never experienced a CW pileup before, and it was funny that my first one happened on such a rare band as 222 MHz. Lots of fun, though, and a good experience to help bolster the confidence for the big 6m CW pileups. The last half hour was spent trying to pick up new grids to the west, and VE3DS suddenly came in with great 559 signals from FN03. The winds being generated on the exposed hilltop were quite bad every time another lake-effect snow squall came off Lake Ontario. It sounded like ice pellets hitting the side of the van a couple times. There was an inch of snow on the grassy areas when I got up there, then when the sprint was done, the road surface was completely covered too. I had a tough time getting the mast sections apart and getting the leveling blocks dislodged from the now-frozen ground, all of which is expected for a January VHF Contest but not for a spring Sprint in the second half of April! 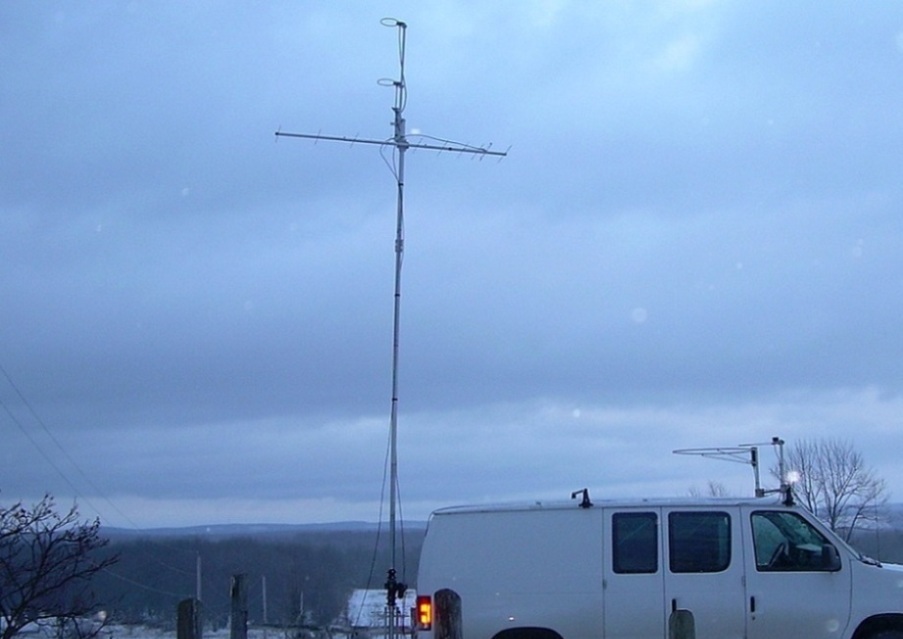