With the 432-and-up vehicle unavailable and its backup vehicle undergoing critical repairs, MobileComm1 was configured for 2 operators on only the bottom 4 bands. The wx looked good for central PA Saturday, and not so good for central NY Sunday. With fewer operators than last year, we decided that longer grid activations and fewer of them was a good overall guiding principle in order to cut down on assembly/disassembly time. We went ahead with a plan of 2 stop-n-shoot grids Saturday and 3 Sunday. We would also be assessing the quality of Saturday's second location since it was new to us.

Tom KC2SFU got us permission to use a site on private land in FN10 to start the contest. When we got close to the site, Jon W2BDN called the owner by cellphone and confirmed that we were just minutes away. With less room available than usual for picking the best spot, we had to use one with some foliage attenuation in some directions, but a clear shot in other directions. The contest was on, and with no QRN the contacts rolled in nicely. In fact, this would end up being our highest QSO count grid activation at 74 QSOs. We noticed that we really didn't work any long-haul contacts, which means the QSOs were generated simply by having good activity levels which is often the case at the start.

After 3 hours there we moved to our new FN20 site and were impressed with the wide open space. We did have some 6m QRN that sounded like power line noise or noise from the lamps on the utility poles. Two meters was great, though. Jon worked into FN25 (321 mi / 517 km) which was our best DX of the contest, and also picked up rare FN14. Unfortunately, we were too far west to get in on the coastal tropo. On 6m with the antenna apparently pointed away from the noise, we worked Maine station K1WHS FN43 (308 mi / 495 km) which is not bad for a Moxon, and probably our best DX on 6m for the whole contest. It was hard to pull ourselves away as there were more opportunities available, and this would be our best QSO rate grid activation of the entire contest (one QSO every 2 minutes and 6 seconds for 159 minutes of operating), but we didn't want to get back to CNY too late and ruin our second day. We tore down a bit late, and switched the bottom 3 bands over to rooftop loops in order to "run-n-gun FN21" on the way home. Before the FN21 activation began, we had already amassed 46 percent of our weekend QSOs in just 35 percent of our operating time. Jon worked 8 stations from FN21 while I drove, and contacts were made on all 3 bands. The last one went into the log just before crossing the NY/PA border.

Sunday morning we left home and arrived on schedule for western FN23 (too far west for the coastal tropo again). We finished setting up and the rain started coming down less than 15 minutes later. Our shot to the southern directions is particularly good at the roadside pulloff part of the hilltop where we were, and has fewer obstructions than the summit. From here we worked Long Island QRP station WB2AMU FN30 on 6m/2m (211 mi / 339 km). Rain showers came and went throughout the morning. With 8 tropical systems populating the hurricane map the day before the contest, we decided that we probably shouldn't complain about getting hit with light rain at the moment we were tearing down. This was another 3-hour grid activation, although we ate lunch in the last few minutes and tore down at about noon.

We headed back south to our home territory to run one quick errand and then we drove west to our FN12 location. We drove through rain for a good portion of this time, which is great news because it means we are not getting hit with it while assembling/disassembling antennas. In fact, when we did get cell service, the RADAR loop showed that one rain band was arriving earlier than originally forecast (and it happened while we were driving), and the next one split up and went north and south of our FN12 location while we were setting up! The even better news is that this site performed like the old days after a couple years of lackluster performances--we easily picked up new western locations that this site is known for providing. We left after 3 hours and at 6 PM we headed back to the east for our final grid activation.

Getting set up in western FN22, we got on the air in the 7 PM hour. One of the highlights at this location was working one of our unavailable team members Tom KC2SFU who used a scanner antenna to work us on 50/144/432. We needed highlights because the QSO total should have been much better here at our highest hilltop of the weekend. We did, just barely, generate the highest QSO count of the day by 2 QSOs, but this was our longest grid activation as we were here for more than 3 hours, so consequently this was our slowest QSO rate of all stop-n-shoot grid activations. At least we did get more highlights: In the last 15 minutes VE3ZV showed up from EN92 and gave us all 4 bands on a 230 mi / 371 km path, our best DX to the west. Earlier we worked K1WHS FN43, this time on all 3 of his currently resurrected bands at 248 mi / 398 km. On 6m we worked Dave Sumner, K1ZZ, former CEO of the ARRL. Another notable contact was working a station in Seaford, Delaware on 2m who was running 80w ERP into a single VHF loop (273 mi / 440 km). Update: N2SLN/R takes first place for our 4th September win. 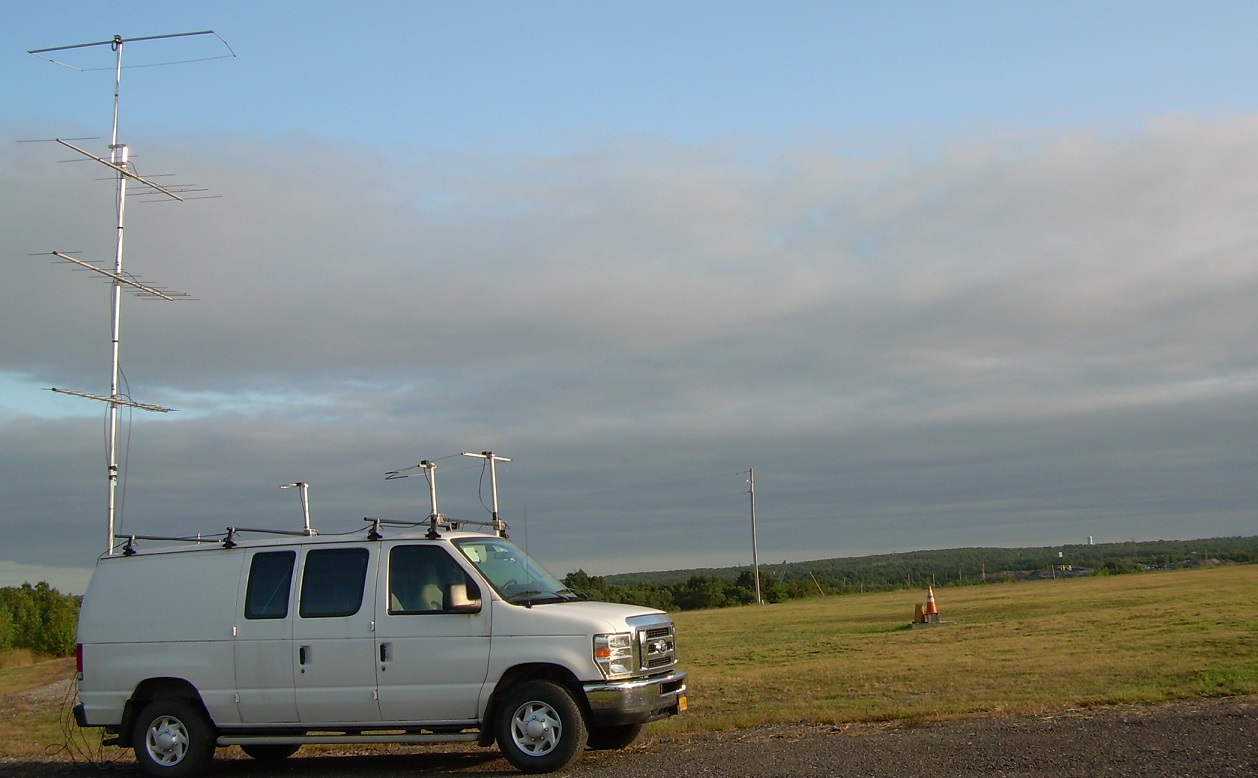