We got together for a dry run the Saturday before the contest and replaced a bad coaxial adaptor on the 432 antenna stack. We tested interference from one vehicle to another and there was none whether using the big antennas or the loops. But there was occasional intra-vehicle interference from both 6m and 222 to the 2m station. A practice run of assembling the big 50-222 MHz antenna system on MobileComm1 was a success. The microwave gear was ready and partly installed in RV2 (Rover Vehicle 2) ahead of time.

In January we had planned to help the Rochester VHF Group celebrate their 70th anniversary by roving the Rochester, NY grid corner on the first day and roving other grids within their club territory on the second day. Unfortunately, a snowstorm thwarted those plans, so we decided to try the exact same plan for September instead. On the Saturday morning of the contest, we left our home grid FN22 with 2 vehicles to drive to the FN02/03/12/13 grid corner for our first time ever. Our K1RZ database entry was in place 3 weeks in advance. We were eager to see if our equipment problems from last year's September VHF Contest were solved, plus we were equipped with microwave bands for the first time ever and wanted to see what they could do.

We arrived in FN03 and set up the stop-n-shoot antennas before taking some photos. The contest was on and we were ready with a full-time op on 2m and another on 432. The 6m op would only occasionally leave 6m to work 222. The 432 vehicle also had 902 and 1296 available with another full-time operator. With no hilltops blocking our signals, we accumulated 43 QSOs in 61 minutes of operating from this grid, which we didn't know at the time would be both the highest QSO count of all 4 sites visited that day, and the highest QSO rate of all 7 grid activations for the weekend. I need to mention that there was a good run of contacts on 223.500 FM simplex, and my only regret is that I did not have the guys in RV2 equipped to quickly use FM on 146/446 MHz.

Next, we moved to FN02 and used the run-n-gun antennas since there was no time to set up the bigger ones. This would be our highest elevation site of the first day, but that didn't seem to help keep our QSO count high, and neither did extending the duration to 90 minutes. We ended up with our lowest QSO count of the day at 11 contacts, but at least contacts were made on all 4 bands, which still gives us multipliers, and we get one more multiplier for activating one more grid. Plus we did get back on schedule after leaving the previous grid late.

We re-located to our third site which was in the northwest corner of FN12. We were scheduled to stay in this grid 90 minutes also, and that means using the run-n-gun antennas again (bottom 4 bands only). This was a good site that was obstruction-free in many directions which helped give us 42 QSOs, including a 256-mile contact on 2m with Maryland station K1RZ FM19. This would be our second best QSO total for the day.

Our final grid activation for Day 1 was FN13 near I-90 for a quick getaway. Despite being the lowest elevation of the day, the site is on a small hilltop, although there is moderate tree blockage. We stayed only an hour here but managed 33 QSOs across all 4 bands, including an all-band sweep with VE3OIL/R. Two meters was the best performer as would end up being the case for 6 of our 7 grid activations this weekend.

We finally accomplished our 2019 goal of padding the logs of Rochester-area stations with extra QSOs, and did so while keeping the more popular sites available for local rovers. Thanks to the Rochester folks for helping generate 129 QSOs on our first day, and happy 70th!


Our group got back together early Sunday and launched Day 2 by heading to northeast PA to activate FN21. This was a site that required permission to set up on private property. We installed the big antennas and stayed 3 hours. We worked 77 QSOs on all 6 bands from our highest elevation of the contest despite moderate tree blockage in most directions. That would end up being our highest QSO count grid activation of the whole contest. Six meters was in great shape and tied 2m for number of QSOs here. We picked up new grid EN90 on 6m/2m and easily worked several 4-land stations in FM08. Another highlight was the run with Maryland station K1RZ FM19 at 196 miles / 315 km on all 6 bands.

Next we were northbound to FN22 for a 3-hour activation of our home grid after some refreshments. This one would be hitting during the Sunday afternoon doldrums and with no tropo likely. But this was our most unobstructed site and second highest elevation for the weekend. The microwave gear was down for this activation, but 58 percent of our QSOs were 4-band sweeps with 8 stations. We watched the RADAR loop as it showed a patch of rain moving through NNY. All we got here in CNY was a few raindrops on the windshield, but NNY is where we were headed next.

We got Don back to his parked vehicle and all drove to his house so he could drop it off and ride with us to FN23, our final grid activation. The first contacts went into the log around 0000 UTC. The first thing we noticed was how the cold front that moved through this area killed propagation on 432. In 3 hours we worked only 6 contacts on that band which was worse than a couple of the previous day's QSO totals from the smaller "quick-deploy" antenna. Nonetheless, we managed 55 total QSOs, the same number we got from the previous grid activation. Plus, this was our farthest east site and some trees to the east had been removed recently. As a result, we finally got good results to the east. For example, we finally picked up FN42 in the second to last hour of the contest. The ice packs and remaining drinks were getting warm and the ops were getting tired, so we gave some thought to shutting down early. Just then there was a burst of activity from the east in the last 11 minutes where 7 more contacts were worked on 2m/222. They were all FN42/43. While 7 activated grids is not our record, 750 miles driven is our record and it felt like it! Update: N2SLN/R takes 2nd place: QST results 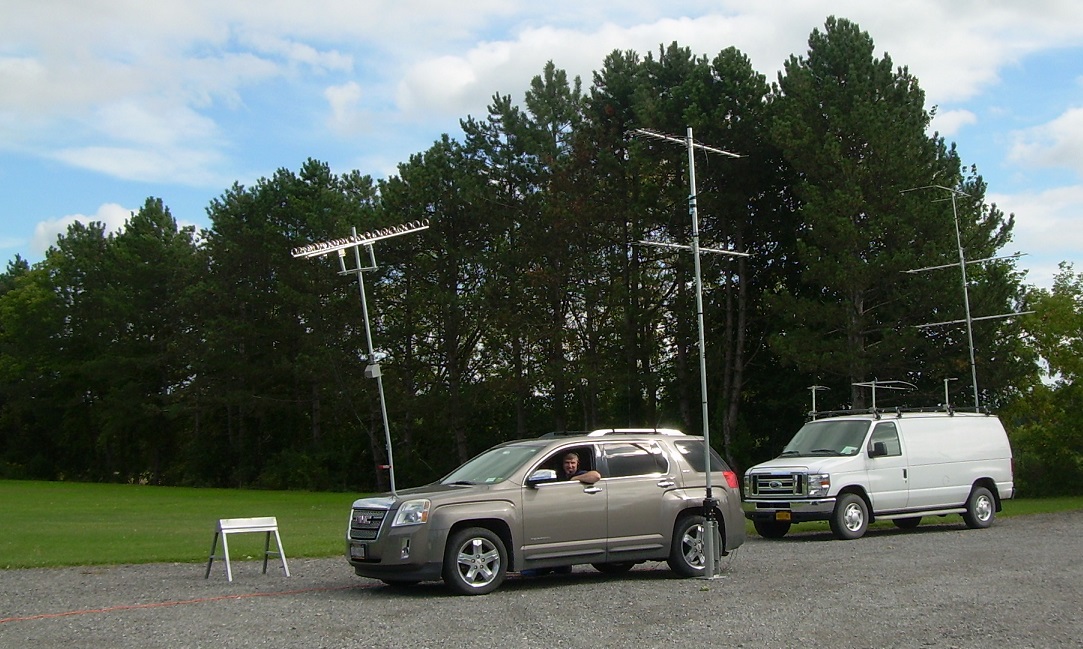