After two preamp failures in a row on 432 (September 2017 and January 2018), we removed the preamp from the equipment lineup and decided in March that we would move 432 to another vehicle. The disadvantage is in having to communicate with a second vehicle if we have to have that operator call CQ in a particular direction when a station is being passed from another band. The advantage is that the amplifier is more easily hard-keyed with a dedicated transceiver, plus we get to use the stacked Yagis instead of a single one thanks to the antenna support structure being unused for anything else. One more bonus is that we would end up with a full-time presence on 2m since that op would not have to split his time between 2m/432 anymore. We were hoping that the increased physical separation would also help reduce the chances of harmonic energy from 144 MHz getting into the 432 equipment, something that the bandpass filter cannot fight.

In addition, for a number of years we have struggled with station-to-station interference problems. After the 6m/2m interference problem was solved, we turned our attention to the 2m/222 MHz problem. In April two quarter wave coaxial stub notch filters were installed in the rover vehicle--one for the 2m station to get rid of the 222 MHz interference, and one for the 222 station to get rid of the 2m interference. There is no longer any interference being received on 222, but 2m still receives it. So the next move will be to replace the present 2m bandpass filter which is 4 MHz wide with a narrower one tuned specifically for the SSB portion of 2m.

We did equipment testing in August to see whether the 432 vehicle would receive interference from the other bands. On 6m it did not, but on the other 2 bands it received S5 interference. We temporarily put a borrowed bandpass filter on the 432 station and the interference disappeared. The bandpass filter wasn't designed to handle the transmit power that we would be using, so on contest weekend we used the 70 cm side of a diplexer as a filter and it helped reduce the received interference somewhat despite a wide bandpass. We also tried parking the second vehicle as far as possible from the van.

On the Saturday morning of the contest, we left FN22 early for a leisurely drive to FN20. We got set up early and had time to get some photos. The contest was on and for the first time ever, we had a full-time op on 2m and another on 432 as advertised on the K1RZ database well ahead of time. The 6m op would only occasionally leave 6m to work 222. It took us all a while to get into the routine at this first grid activation. We were using FRS radios to communicate between vehicles, as there are no computers for communication/logging/digital modes. What we didn't realize is that from a good hilltop we were apparently putting out a good signal on FRS frequencies, based on the antics of a few bothersome folks. So we changed channels and programmed a CTCSS tone and life was good again. Despite only a 20 percent chance of rain all day, the rain did start to come down here. We collected 50 QSOs in two hours and tore down on schedule.

Next stop was the FN10 site that we got permission to use. While we were setting up, the rain started to come down heavier than before. We got on the air and made a few contacts before a 5 PM sched arrived. We had no luck with that sched, but did complete on 432 with another sched. The 432 station was working much better from here--we ended up making 18 contacts on that band. One of the highlights of this grid activation was the high number of QSOs overall, which is the reason we travel down to this area on the first day. The 12 QSOs we had with K2EZ/R from this grid is now the highest number of contacts we've ever had with one rover during a single grid activation. Overall it helped us to achieve our most productive grid activation of the weekend with 83 contacts. As we would find out later, 45 percent of our contest QSOs had just been made from the first two out of eight grid activations.

Our next goal was to drive to an all-time new location and both assess it and operate from it. The site was a small hilltop in a very rural part of southeastern FN11 that ended up having a fairly good horizon in some directions and some distant trees in the remaining directions. This was to be a short stay--we planned to use just 50/144 on the rooftop loops, and a 10-el 432 Yagi that takes only a minute to set up on RV2 (Rover Vehicle 2). We worked K2LIM on 6m who was 5x9+10, but when I went to work another station on 6m, the amplifier started clicking. The rapid transitioning from RX to TX killed the RF-sensed preamp and the receive went dead. So I switched off that preamp and switched on the amplifier's built-in preamp. Kinda sounds like the makings of a country music song: "I lost my preamp somewhere in FN11". We decided not to continue trying to use the 6m loop incase it had high SWR. Then the bad luck jumped over to RV2 because now we had high SWR on the quick-deploy 432 antenna. As we would find out later, that was nothing more than a loose cable. Rover equipment always takes such a beating on these less-than-stellar roads. Thankfully, 2m came through for us; Don worked 4 contacts and then we were able to leave quickly with no tear-down time required. After the contest, more testing revealed that the 6m loop had a good SWR--it was the amplifier that failed. So from now on, the passenger side transceiver will handle 6m with its 100w at these quick-stop sites and while in transit.

We made our way through some narrow backroads in order to return to the interstate. Don started calling CQ on 2m as soon as we entered FN21. He managed to find 4 stations while we made our way back to CNY, and that completed our 4th grid activation and first day.

We got back together Sunday morning and headed 90 minutes north to cold FN23 where the temperature was in the 40's. We were thankful not to be in Pennsylvania again today, as the RADAR loop now showed rain covering the entire state. We got set up and started operating, but then Tom came over to the window and announced that there were voltage problems which were causing the rotor control box to blink on and off. Just to play it safe, he decided to travel back home, dropping off Jon in the process, but not before leaving us with one 432 Yagi, one piece of mast, and the feedline. So Don and myself finished the grid activation without 432 on the air, but we now have the necessary equipment to put it on the air at our next stop-n-shoot location. We picked up lots of new grids here from both the east and west, and managed to fill the log with 47 more QSOs. While tearing down, we noticed that the 2m antenna switch never got switched over to the Yagi, so we made all nineteen 2m contacts on the loop two feet above the van roof, including 252 miles to a station in southwestern PA!

We left on schedule and traveled 90 minutes, entering FN13 three minutes earlier than predicted. Don used the 2m loop to work K2LIM in nearby FN12 and then worked a 210-miler with W3SO FN00 from north of Syracuse, NY. That soundly concluded our 6th grid activation.

We got to our FN12 site early and used the opportunity to walk around a bit for some exercise and a mental break before setting up the station. We noticed the old Western Union microwave relay tower had been taken down sometime since the July CQ WW VHF Contest. Sad to see another bit of communication history gone. Most folks don't even know that Western Union was a telegraph infrastructure company in the 1800's and later developed a wireless version requiring a network of hilltop relay stations. It was Western Union's secure communication systems that delivered the telegram bringing the news of the Pearl Harbor attack (image available on the Internet), although this particular hilltop relay station was probably added to their network during the 1964 panic build-up of additional sites during the Cold War. The bigger concern for us right now is whether we can continue using this hilltop in the future if it is undergoing changes. We just stopped using our previous FN12 site a couple years ago due to posted signs being put up there, and now this one may be in jeopardy. With K2LIM operating their final contest this weekend, it will be more important than ever to help keep FN12 on the air. Anyway, we had a pretty good time here with 432 back in operation, including 7 all-band sweeps. One of the best examples of teamwork was when K1TEO requested a CW contact on 432. Don handed me the paddle, operated the footswitch, and did the logging while I did the CW. Immediately afterward, a Long Island station jumped in there and we did the same thing all over again, which also provided us with our first FN30 contact. We worked 52 QSOs in all, but strangely, we did not pick up any western grids from here, and yes, we were on the 2m Yagi this time(!) and pointed it in all directions as usual. Normally this hilltop is famous for getting us those grids to the west and northwest.

We arrived at our FN22 hilltop to begin the 8th and final grid activation. We set up the station in the highest winds and elevation encountered this weekend. Tom and Jon re-joined us and Don used that opportunity to leave so he could get home at a decent hour since he has the longest trip home. Jon did some operating before leaving, and then Tom took over for the remainder of the contest. There was good activity at first, but it began dropping off with each passing hour. There were no 6m contacts at all in the final hour. Testing of the 6m station after the contest revealed that the amplifier had stopped amplifying transmitted RF, probably sometime late in the 2nd to last hour. If it had to happen at all, I suppose near the end of the contest is better than near the beginning. On a more positive note, we did end up with our highest 2m QSO count in the most recent 3 attempts at this contest (2016/17/18) thanks to having a nearly full-time 2m op and no real equipment issues on that band. 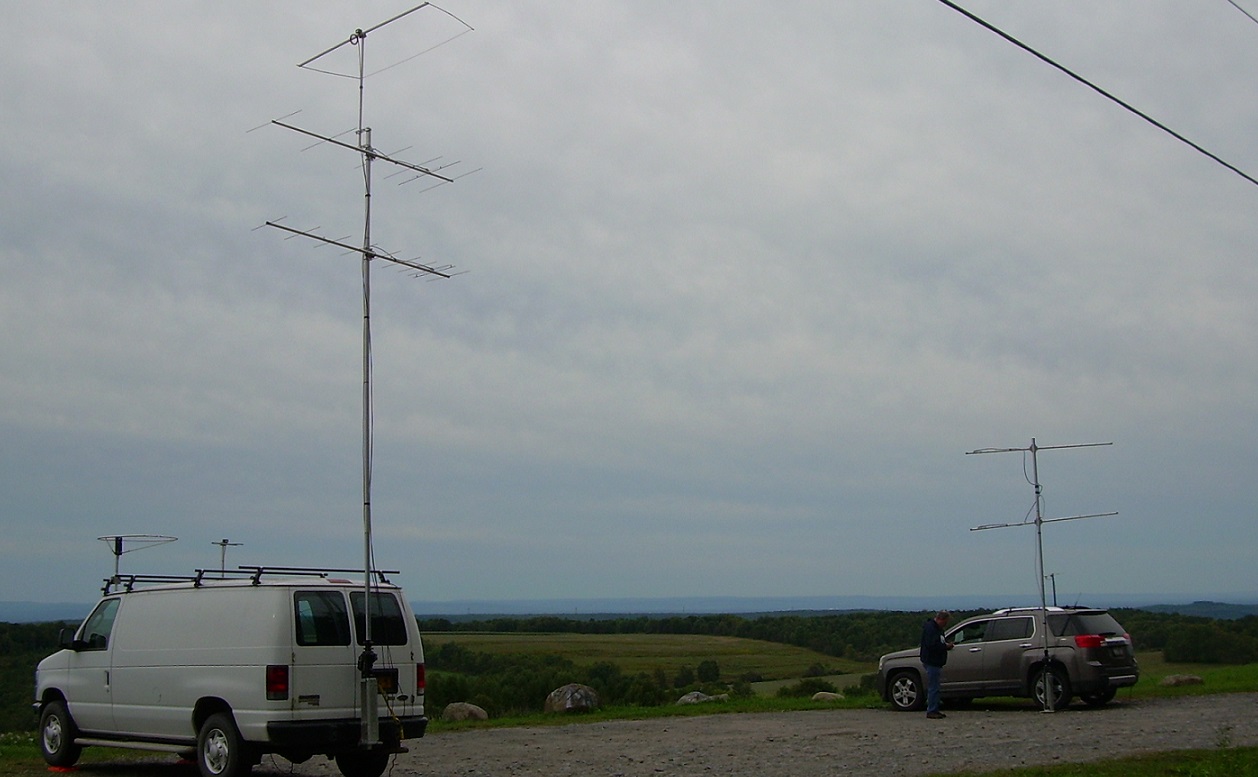