What a weird contest!

The spring sprints revealed a hole in the grid map at FN11 for most of the bands. As a result, I made it a point to activate FN11 in the CQ Worldwide VHF Contest in July, and when I did, some folks told me that they also noticed the grid becoming more rare. These observations laid the groundwork for an effort to activate the grid in September. Upon closer inspection, the hilltop that I used in July turned out to be a gap (a low point between two higher points) despite the good overall elevation. So I decided to move that site down to 3rd favorite on my list of FN11 sites (especially since the access road was in bad shape). Some research and phone calls in August provided us with a 1st favorite FN11 hilltop, which we planned to use at the start of the September contest. We had not used this site before, but it would be our highest elevation for the contest, so it was critical that we make good use of the opportunity.

For the rest of August and September we continued preparations, including getting a 2m loop operational on the roof of MobileComm1 so that we could run-n-gun through grids that don't have a good place to set up the bigger equipment. We also created written directions for routes to and from the new FN11 hilltop since we had to arrive and leave at specific times so the keyholder could arrive to lock and unlock the gated access road for us. On Labor Day weekend right before the contest, as Hurricane Harvey remnants were passing through NY State, forecasts showed Hurricane Irma not quite making it to the east coast by Friday morning, the day before the contest. So we knew Saturday was safe and figured Sunday was, too. We began wondering whether hurricane-induced tropo would develop to the north of the hurricane like we had in September 2013 here in the northeast.

I did a check of the hourly forecasts Friday for the 5 main hilltops we would be activating throughout contest weekend, and they all looked good. The maximum probability of precipitation was 5 percent, maximum sky cover was 43 percent, and the maximum wind speed was 8 mph. We left extra early Saturday to ensure that we would get to the all-important new site on time, and we did.

Weird thing 1: Right off the bat we were hit with no 432 receive, highlighting the importance of a full dry run before contest weekend. Turning the external preamp off brought the band back to life. So we left that preamp off, tried the amplifier's built-in preamp, and that also killed our receive, so we turned that back off. We tried the transceiver's built-in preamp and that worked, so we would have to limp through the rest of the contest that way. Weird thing 2: The first observation Tom and I had was that the always-fun "first hour frenzy" just wasn't there this time but we couldn't figure out why yet. This site should have provided us with a 1st place QSO count of all our stop-n-shoot sites, but it came in 3rd place. We decided to delay judgment incase it was an anomaly. Thankfully, we did work K8GP/R FM08 on all 4 bands from here. We will try this site again in the future.

We left on schedule for FN10 and when we got there, Weird thing 3: One of the owners of the property stopped and asked us what we were doing. Keep in mind, we have been going to that site for several years and have even talked to / seen that person many times, but explained anyway that we are taking part in an emergency communication drill. Apparently the owner we called on the phone didn't tell any other owners that we had been given permission to use the site. This all highlights the unnecessary complications that arise when drifting away from privacy as a core roving principle. After that scare was over, we got down to business. Unfortunately, Weird thing 4: the activity was down at this site, too, and FN10 has been our highest QSO site in some contests in the past.

The next day we had a predicted 85 percent relative humidity at 9 AM at our FN23 site, so the hope was that we would run into some tropo in the first hour before it burned off. We did see distant valley fog from one hilltop along the way there, but did not get any extended paths. Nonetheless, for the first time ever, FN23 would provide us with the highest QSO count of all our grid activations (finally, a piece of good news). Plus, we worked Maryland station K1RZ FM19 from here on all 4 bands (296 miles / 477 km) for a second year in a row.

We arrived in FN12 early thanks to a new shortcut that worked well. Weird thing 5: Unfortunately, we had a very low QSO count here as well. Even with extra time available, this was our 2nd worst QSO count. The first hour was great, but after that, the activity nosedived, including a 32-minute period with no contacts. We were disappointed not to pick up new grids west of here (this location's specialty). On the bright side, we worked N2XRE/R, the only station to give us FN01 on all 4 bands. After two and a half dismal hours, we left early. We called Jon W2BDN and told him our expected arrival time at the FN22 hilltop. We met him there for the final grid activation.

After we set up the antenna system, Jon plugged away at the 144/432 station for some first-time operating in a hilltop rover experience while I operated 50/222. Tom lay down in the cargo area of the van, planning future projects on which I could spend my money. Weird thing 6: The bands were the deadest I have ever heard them at this spectacular site, so it was a good time to provide training to someone new, because we sure weren't missing out on any pileups. In the final hour I left for a walk to get the circulation up. When I got back, I found out that the new guy had honed in on a 2m station calling CQ, and it turned out to be northwest Illinois station K2DRH EN41 (soapbox). Jon called him a few times and got through from 746 miles away (1201 km), setting a new 2m tropo DX record for N2SLN/R on his first day on the job! Jon said K2DRH was moving to 222.150 CW so I went there to listen. I heard K2DRH calling someone, and when he was done calling, I jumped in there and called him, but he had already moved to another band. His signal was easy copy and no QSB, so it would have been a slam dunk with my 222 station temporarily running twice the power as his (Bob turns his power down to 100 watts in order to compete in the SOLP category in some contests). Then we pointed south southwest, looking for more tropo, and there was North Carolina multi-op station AA4ZZ EM96 who we proceeded to work on all 4 bands on a 542-mile path. Too bad the contest was starting to redeem itself so late in the game.

On Sunday I would periodically check for Florida beacons on 6m just to see if there were any left standing after Hurricane Irma, but there wasn't even a hint of sporadic-E. I guess we have become spoiled with quite a few unexpected 6m openings during recent September contests. There was an X9.3 solar flare on the Wednesday before the contest, and it produced a CME. It is now the biggest solar flare of Cycle 24 to date, and proves that big solar flares can happen long after solar maximum. The earth-bound component of the CME triggered severe G4 geomagnetic storming, sending the planetary K-index to K=8 twice on Friday, but began weakening Friday night and continued weakening on Saturday morning. There was another flare (X8.2) on Sunday during the contest, which is now the second biggest of Cycle 24 so far. This flare occurred on the west limb of the sun, so the earth-directed component of the CME was forecast to be weak (only G1 geomagnetic storming predicted by NOAA), and would not reach earth in time to produce ionization for the contest anyway.

We ended up with the lowest QSO count (regardless of band) since we got serious about roving in 2013. Thank goodness we activated FN21 and FN13 with a 2m loop while driving non-stop through them, adding two more multipliers to our total which resulted in 935 more points. I guess what made the contest activity so low is that everyone's attention was on Hurricane Irma which was making landfall in Florida Sunday morning, not to mention the new digital modes FT8 for troposcatter and MSK144 for meteor scatter, pulling people's attention away from SSB/CW. Laptops have historically generated too much noise on the bands, so in order to keep my noise floor as low as possible, computers were removed from my rover vehicle designs in 2002, and same with inverters (the rotors all run on 12VDC). That prevents the need for digital modes to pull out signals several dB below an unnecessarily high noise floor. Plus, there is no computer to "freeze up" and destroy the log--we still use paper logging and haven't lost a log yet. Even though we didn't have enough QSOs to win this one, we did have the grids:

We accumulated more multipliers than anyone in the category, including stations with 7 more bands than us. Now just imagine what we could do if everyone within our long reach got on the air and made some noise on SSB/CW!

Not long after this contest, a friend of mine in Puerto Rico experienced Hurricane Maria on September 20th, 2017, losing commercial power, landline service, cell service, and Internet service. The day after the hurricane he re-installed his ham radio antennas and was able to send emergency communications via 20m PSK63 to the northeastern US close to where he has friends and relatives. His later comments to me included the uselessness of FT8 in real-world emergency communications, because it can't handle large amounts of information that need to be passed quickly. So...while it is important to allow scientific experimentation with modes like FT8 just to see what's possible "on the cutting edge", I would also encourage the digital-equipped folks to mix in a bit of SSB/CW operating (some did mention that they are doing both), as these contests are to be considered emergency communication drills of a sort. Maybe an easy trick would be switching to VFO-B after each digital QSO to check for any new "analog" activity. We may also try moving our 6m station to a separate vehicle in hopes that the 6m op can choose to do computer-based modes if that's where some of the activity is going (assuming there is no computer RFI being generated). 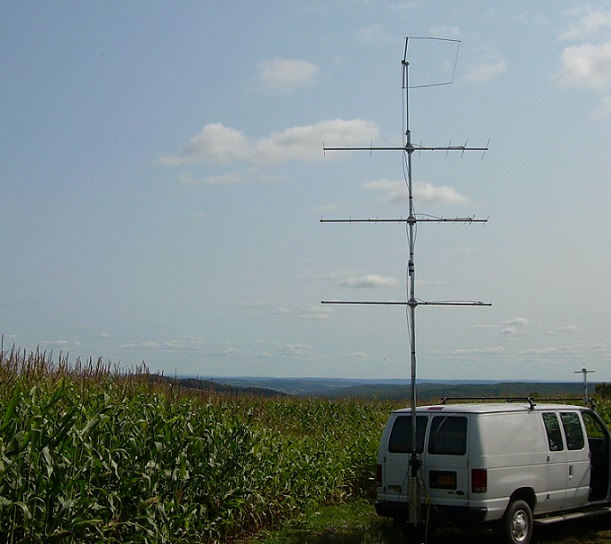