THE RACE AGAINST TIME

In September 2013 N2SLN/R was a single-transmitter rover with two operators available. Making the transition to a two-transmitter rover station was the logical next step because it would double the presence on the air, but RFI issues immediately plagued us in the January 2014 VHF Contest in that configuration. The station-to-station interference caused 6m and 222 to be almost unoperational while 2m was transmitting, 432 would occasionally not transmit at all, and 2m received interference from the 6m station. In July 2014 the problem returned even with a different antenna configuration and a duplexer on the 2m station filtering out some of the unwanted products. On 9-August I met Tom for the first dry run in preparation for the September VHF Contest 2014. We tried to address the RFI issue by increasing the distance between feedlines and moving the 2m antenna to its own support structure. We also installed snap-on ferrite beads on power cords and turned antennas in various combinations of directions, but nothing helped. However, we did make progress on one issue--we successfully ran 300w simultaneous transmit power without frying the alternator or cooking the 60A fuse. That was made possible by Tom connecting two fully charged 55Ah auxiliary batteries in parallel with the van's starter battery. We watched the voltmeter and ammeter closely and the system was working well. The majority of the instantaneous power was coming from the aux batteries during transmit, then the alternator was recharging them during receive.

On 30-August we did a second dry run in order to see how quickly we could set up the full station. We came in at 20 minutes for leveling the vehicle, installing two support structures with rotors, two masts, six directional antennas, eight pieces of feedline, and two rotor control cables. We felt like this was a pretty good performance for a stop-n-shoot rover station with stacked antenna systems on two of the four bands.

With contest time less than two weeks away, I took delivery on a 6m bandpass filter which was to be the next attempt at removing RFI but I was still waiting for a coax order to arrive before I could add the filter to the equipment lineup. Unfortunately the coax didn't arrive in time for the September contest, but one piece of good news was that we did manage to get our hands on an amplifier control cable at the last minute. Now Tom's radio can hard-key the 2m amplifier and that will help save the preamp from burning out. With no time left for further experimentation on the RFI issue, we agreed that we would just call CQ at the same time in order to minimize received RFI.

We had planned to activate three grid squares on the first day of the contest. We drove to what would be our third site of the day in order to check it out, since we had never used it before. After deciding that it would probably work for us, we continued toward our first site. The access road turned out to be gated--something we did not see on the satellite map due to tree blockage. So we called the contact number listed at the gate and asked for permission to use the site for a ham radio communication exercise and were denied (no reason given). Since we had only planned to be there an hour, we decided to add that hour to the second site of the day (FN10) by getting there earlier than originally planned, and increase the duration from two hours to three. We would also extend the duration of the final site of the day (FN21) from two hours to three. We talked to the business owner of the second site and asked if we could start a bit early. He promptly gave us the go-ahead. This grid activation went on to provide us with our highest QSO count of the entire event--great revenge on our earlier bad luck. We managed 83 QSOs from here, including a few Florida stations on 6m plus a 2m contact to rare FN15.

Next we moved to FN21, the highest elevation we would encounter in the contest. This was another site on private land that we had to gain permission to use. Although we have activated FN21 before, this particular location was new to us. We worked a couple more Florida stations on 6m but didn't work anything noteworthy on the higher bands, probably due to more signal obstructions in more directions than we expected. We also encountered an unexpected noise on 222 which made weak signal work difficult on that band (which turned out to be TVI from digital TV channel 13 at 210-216 MHz). But we did manage to jog through all bands with a few stations, and it was nice to run into fellow rovers NF2RS/R and K0BAK/R on the air while here. On 6m we got called by K1ZZ, the Chief Executive Officer of the ARRL who was trying out a new antenna. Around 9 PM we tore down and made the 2.5 hour trip home for the night.

Sunday morning I picked up Tom and we headed 1.5 hours north to activate FN23. This spot is always good at pulling in the stations to the east, and with some tropo toward the southeast, we were able to work Long Island stations on all 4 bands. K8GP/R was loud from FN00 (271 miles away) and we worked them on all 4 bands, then we ran into K0BAK/R FM28 and worked him on a 300+ mile path which was among our best DX. The QSO counts at this grid activation were more tightly packed across our 4 bands because the bottom two didn't do as well as usual and the upper two did better than usual. Just collecting all those new grids to the east would have been worth the entire 3 hours spent here.

Next was the 2 hour drive west to activate rare eastern FN13. This would be the lowest elevation site we would encounter in this contest, so we gave ourselves only 2 hours to operate here. As of 2014 this is a new site for N2SLN/R, so it's still under evaluation, and so far the lack of elevation here really does make the bands seem dead. We collected only 37 QSOs, but we did work stations on all 4 bands, and we did have a good 300+ mile contact on 2m with Virginia station W4IY FM08.

An hour's drive south got us to our FN12 site at three times the elevation above sea level. In January with no leaves on the nearby trees, this site gave us our highest QSO count of all 8 activated grids. As a result, we would give ourselves 3 hours to operate from here for this contest. This would be the fifth time we set up the equipment this weekend, so we timed ourselves and we were now getting it done 3 minutes faster than usual. We also made an FM simplex contact on 223.5 MHz from here which would end up being our only FM contact. This was a very productive grid activation resulting in 80 QSOs. Opportunities were still coming in as we began tearing down, but it was important to stay on schedule because we saved the best site for last.

The final grid activation was FN22, our second highest elevation in the contest, timed perfectly to arrive in the evening for the best chance of band enhancement. As soon as we got the equipment turned on I heard N0LL EM09 calling CQ on 6m, and we worked before I even had a chance to move the antenna his way. There was no wind mixing the temperature and moisture layers together, so we ended up with some extended paths on the upper bands, too. Tom worked EN82 and EN92 out to the west on 2m, and I worked as far west as EN92 on 432. Then Tom worked a backpack portable QRP station in West Virginia on 2m from 335 miles away. Next he proceeded to work North Carolina multi-op station AA4ZZ EM96, and I was doubtful we would make it on 432, but there was a sudden upward swell of QSB and there they were, so we completed on that band. We moved to 222 and I had even more doubts because of the lower antenna gain, but another upward swing of signal strength brought them out of the noise to 5x5 and we completed on that band as well for a distance of about 542 miles. We ended up with 81 QSOs in 62 grids (across 4 bands) from here, with 2m leading the pack in both categories. At 11:00 PM two very tired bodies dragged themselves outside one last time, packed away the antenna systems, and would finish the event at 640 miles traveled. This was the best VHF contest score ever for N2SLN/R (for the second consecutive September) and resulted in another win. We now hold the record for the highest Rover-Unlimited QSO count in any September VHF Contest 2008-2015. 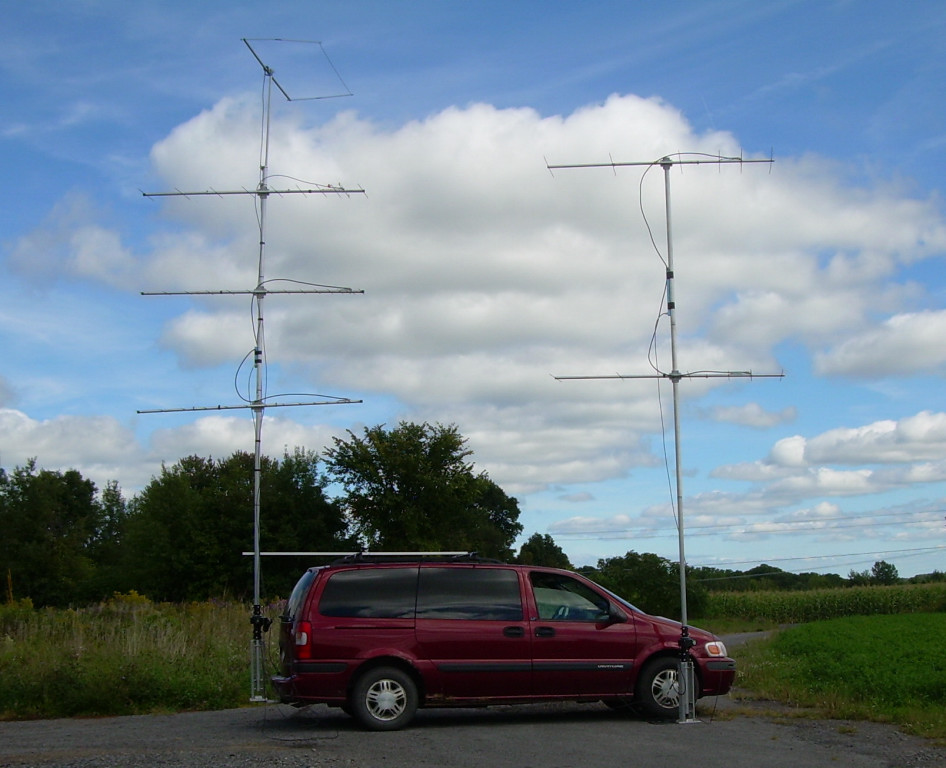