In the days leading up to the September 2013 VHF contest, I finally broke down and ordered a high quality meter and began looking at the SWR readings on all my antennas as well as the power output of all the equipment. What an eye opener that turned out to be...

In April K5QE was selling a bunch of great rover gear, and I got my hands on one of his six meter amplifiers with built-in preamp. This would be the first time I had ever run anything besides the transceiver on 6m. I set the input power so that we were getting 190 watts out of the amp in order to stay within the rules for the Rover-Limited category (200w on 6m/2m). Next, I put the meter on the 2m amp: I was horrified to see that all these years I had trusted the manufacturer's claim of 180 watts, but was getting only one third of that out of the amp. Needless to say, that amp was immediately yanked out of MobileComm1 and replaced with the spare, which wasn't doing much better, but was a slight improvement. A bigger amp was ordered but wouldn't get here before contest time, so we would have to be content with what we had (100w). Then on 222, the input power to the transverter was discovered to be too low (once again trusting manufacturers' claims to be right). So I increased it until the transverter was putting out around 50 watts. I was quite happy that I had found all this extra horsepower and was content to run the contest that way, but then I remembered that I had a spare 222 amp in storage. I pulled that out, hooked it up, and re-adjusted the transceiver/transverter power so we were now getting 90 watts out of the amp, keeping us within the rules for the Rover-Limited category (100w on 222/432). Lastly, I checked the so-called 100w amplifier for 432 and saw that it was doing only 50w out (is there a pattern emerging here?). With no time to order a higher power amp and add it to the lineup, and none in storage, we would have to be content with what we had on this band also. SWR readings were 1.1:1 or better on all antennas, so that was great news. I did a miniature dry run in the driveway and found a couple small glitches that were easily fixed. So the Friday before the contest I met Tom KC2SFU on a nearby hilltop. We did a full dry run and the system was working great. We made some noise on the 205 Morning Group and ran the bands with folks, making sure the audio was still good after all those changes. After some strategizing, Tom and I had a final plan in place and were ready to roll out.

Saturday I picked up Tom at 10 AM and we did a leisurely drive to our first site, FN11. Getting there plenty early, we took our time leveling the vehicle, setting up the antennas, getting photos, and then checking beacons. With 10 minutes to go, we decided on our run frequencies for each band and posted them on a piece of paper on the dashboard. When 1800Z arrived, we began calling CQ with the antennas pointed west, as our main goal was to try working the OH stations which we knew we may not be able to work from any of our other locations. As it turned out, there was either no activity or no propagation in that direction. The contest was off to a bit of a sleepy start overall, but 6m was performing well even without any enhancements. In fact, it ended up providing 47 percent of our contacts from here. We were able to work WB2SIH/R (on his loop antenna) perched atop Prospect Mountain in rare FN33, a 190-mile rover-to-rover contact. After 3 hours of operating, we tore down and began the long drive east to FN21. While enroute, Tom continued to make noise on FM simplex, but no takers.

Checking out a cell tower site along the way, we eventually arrived at our FN21 site--basically a roadside pulloff for farm equipment storage. Lucky for us, the owner was there, and Tom obtained verbal permission for us to use the site. We really hauled in the contacts from this grid. The upper bands came alive and our QSO totals on each band were all within 4 QSOs of each other. No long-haul stuff, just lots of stations making it to our receiver from around the northeast and mid-Atlantic states. This grid activation would end up providing the highest "QSO density" of them all (number of QSOs made per time spent making them). Eighty QSOs for less than three hours of work is pretty good for a rover station using low power. On the drive home we had our answer--we spotted fog in the farmers' fields, and we knew a moisture layer had set up, producing a moderate duct for VHF signals. We wondered if we would be able to get in on more of it Sunday morning before it burned off. Only time will tell.

After 4.5 hours of sleep I was on my way to pick up Tom and head north to activate FN23. Working VE2DFO FN25 on all 4 bands was a real hoot, and a new grid (and one I haven't seen for a while). We worked a station in PA on 6m who said he needs FN23 confirmed and would like to exchange QSLs. Signals were quite good on 6m, but no sign of serious tropo on the upper bands. Working W3SO FN00 on all 4 bands was another highlight and probably the best DX from this grid (255 miles). Not surprisingly, 6m returned as the top performing band, producing 1/3 of the QSOs from this grid. Seventy-five QSOs altogether in under 3 hours is not too bad for a single transmitter station.

The next task was to drive through FN13 for a limited time and try to make a contact while in motion so that we can count it as another multiplier without wasting any time stopping. Tom was all over that task, and reeled in 3 contacts on the 2m mobile whip during the 23 minutes that we were driving through the grid. One of those stations didn't know his grid, so we sent him to the QRZ database in order to look it up. He said he would try looking it up on his smartphone. A few minutes later he came back on the air, gave us his grid, and he was in the log.

Knowing that our planned FN12 site has QRN, a bit of reluctance moved into our moods, and we took our time getting to that site. We made a food stop and stretched the legs a bit, then finally drove to the hilltop and set up. The QRN on 6m did show up again just like it did during the CQ WW VHF Contest. The 2m de-sense was back, too. But we wouldn't have to suffer long, because we didn't have much time available before we had to tear down and head for the final grid activation. K2LIM was 5x9+10 dB on the 2m mobile whip when we arrived here. Signals on 6m to the east were great despite all the interference from the commercial gear. It was quite easy working the guys in FN31/32/33 on 6m. We finally worked our first FN20 station 81 percent of the way through the contest, a grid that is normally a lot more active than that. Six meters stole the show again, providing the majority of the QSOs from this site. After only 104 minutes of operating, we disassembled the antenna system and drove toward our final operating site. Little did we know--we saved the best for last.

We arrived at our FN22 spot, a hilltop with an unobstructed view in most directions. The first contacts were made just before 7 PM, an all-band run with WB1GQR who was operating from Equinox Mountain, VT. Station after station made it into our log on all 4 bands (18 of them in fact). That alone provided us with almost 70 percent of our QSOs from here. It was amazing to complete a 4-band run with West Virginia station K8EP FM09, providing him with a new grid on 432. We also worked VA station N3MK in rarely-heard FM27 on all 4 bands. The north/south propagation was heating up, especially on the upper bands again. Then the best DX of the contest hit: We worked North Carolina station W4NH EM85 on 2m. When the op came back, he said we just worked off the side of his beam! This was a 631-mile tropo contact (map) which is now the longest non-skywave contact I've ever made on 2m, beating the 579-mile tropo contact with Indiana from 2008. The tropo prediction maps missed this one. On contest weekend, Hurricane Ingrid (track map) was hitting the gulf coast of Mexico. The counterclockwise rotation of hurricanes in the northern hemisphere probably means that water vapor was being pulled off the Atlantic Ocean to the northeast of the eye, and slowly being driven inland over the eastern US, allowing a high-elevation moisture layer to set up, or else it was a build-up of pressure when the easterly hurricane wind was colliding with the prevailing west wind. Combine that with the surface cooling that took place both Saturday and Sunday evenings after sunset, and you have evening enhancement at the same time as tropospheric ducting.

Gordon West WB6NOA has written about a phenomenon describing how areas to the north of a hurricane will often see tropospheric ducting of VHF signals. September happens to be the peak month for hurricane activity, too. My first experience with this phenomenon was with Hurricane Andrew in 1992. I was living in Farmingville, Long Island at the time. The evening before Andrew was to hit Florida, there was good tropo underway on the television frequencies. On 23-Aug-1992 I was able to view 19 more TV stations than usual as high as channel 67. Some stations I was able to identify that evening included:


Eleven o'clock PM hit and the contest was over. Two meters was the dominant band from this site as it so often is, beating 6m by seven QSOs. Tom and I tore down the antenna system one last time, celebrating a 100+ QSO grid activation (a record for N2SLN/R) and a thrilling contest overall, including an all-time highest claimed score for N2SLN/R, beating June 2003 which had help from 6m sporadic-E (back when I was part of the AA2YG/R effort). From the gear upgrades, to the operating sites chosen, to the 560 miles driven, to the dedicated operators and the first solid tropo since 2009, this was one fun contest. Update: N2SLN/R takes first place. Official results are here. 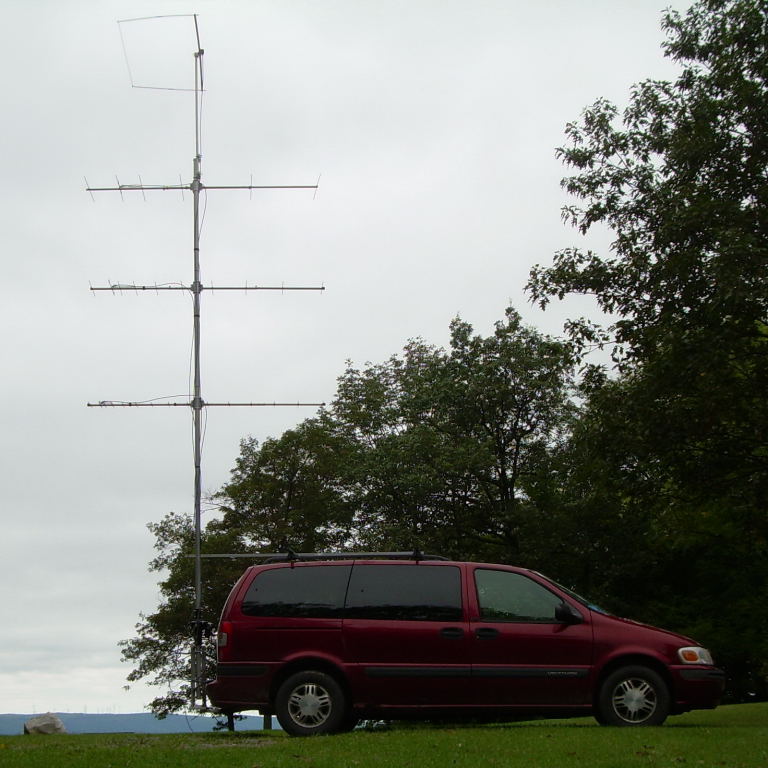