severe wx
The annual ARRL September VHF Contest starts 2 pm eastern time on a Saturday, and runs through 11 pm the next day. I had planned on starting the contest Saturday on an FN21 hilltop in northeastern PA, but the wording of the Hazardous Weather Outlook from Thursday had me concerned. I viewed the convective outlook, and here's what I saw: A moderate risk for severe wx predicted for miles in every direction from my home QTH, and a slight risk outside of that. I decided I wanted to have a lifetime of VHF contesting ahead of me, so the decision was made to stay home Saturday. Seven minutes after the contest started, Doppler Radar indicated a cell with rotation, and two minutes later, a tornado warning was issued for the county where I had planned to start the contest. Looks like staying home was a good decision! A tornado watch was in effect until 10 PM local time.

The $700 wager
For about 3 years I was having trouble with 432. Then once I got that figured out, I began having trouble with 222 transmit audio for a couple years. Since the 222 problem was the IF radio, the plan was to use a different one. But I used that opportunity to also buy the new high-power model Downeast Microwave transverter (60 watts), which I had the factory set up to match the different output power of the new transceiver. The transceiver was already in place as my main contesting rig, so I just needed the transverter to arrive in the mail. Once it arrived, I began getting familiar with the manual, and discovered that there were two ways to feed the PTT signal--it can be sent to the direct input RCA jack on the back panel (which is the recommended method), or it can be disregarded and the RF detector will sense the incoming RF and throw the transverter into transmit mode (the manual warns against using this method). The week of the contest showed up and I decided to disregard the direct input method. I drove to my FN23 site Sunday morning not knowing how the day would turn out. When I arrived, I got the vehicle leveled, got the antennas set up, turned the rotor north and reset the beam heading to zero degrees, and threw the power switch for the 222 transverter. The power light came on--so far so good. I knew I would need a strong station, so I went to 6m, tuned in K2LIM, and worked them on 50 and 144. I changed the transceiver to 28.1 MHz to activate the transverter and heard a normal static level in the background--excellent! I keyed the mic. The XMIT light came on during transmit and went off during receive--and no weird noises or puffs of smoke. K2LIM came in right on frequency and I worked them as my first contact on the new 222 setup. The untested system was working well on the first try! N2SLN/R is back on the bottom 4 bands for the first time in about six years. Unfortunately, the transverter died 4 years later due to my failure to change to the proper method of keying the transverter by explicitly feeding the PTT control signal to the direct input RCA jack on the back panel.

After driving home for dinner, I traveled to my FN22 hilltop to finish the contest. I managed to work some of the sporadic-E to Florida on 6m which is a nice treat for a September contest, although we are getting close to the predicted May/June 2013 peak of Cycle 24, so the unexpected is almost to be expected. For example, WZ1V FN31 reported working into Brazil on 6m the previous day. Not too many days before that, stations in the upper midwest were working 6m TEP into Argentina, and west coast stations reached the South Cook Islands (south Pacific) and New Caledonia (just east of Australia) on 6m F2.

I ended up working twice as many contacts from this grid versus the previous grid, but more importantly, I thoroughly enjoyed being able to work through all 4 bands with several stations like I did in the old days. Heard W4IY FM08 on 2m briefly, but nothing further south than that. I struggled to find stations to the east, with the exception of hearing K1KG FN42 for a moment. No DX to the west either, not even WNY grid FN02. The previous day's strong cold front must have drained all the moisture out of the air. Hopefully the wx will cooperate next year so I can launch the 4-grid effort that I attempted on the last couple September roves (flat tire and intermittent 432 band in 2009, severe wx in 2012). Official results are here. 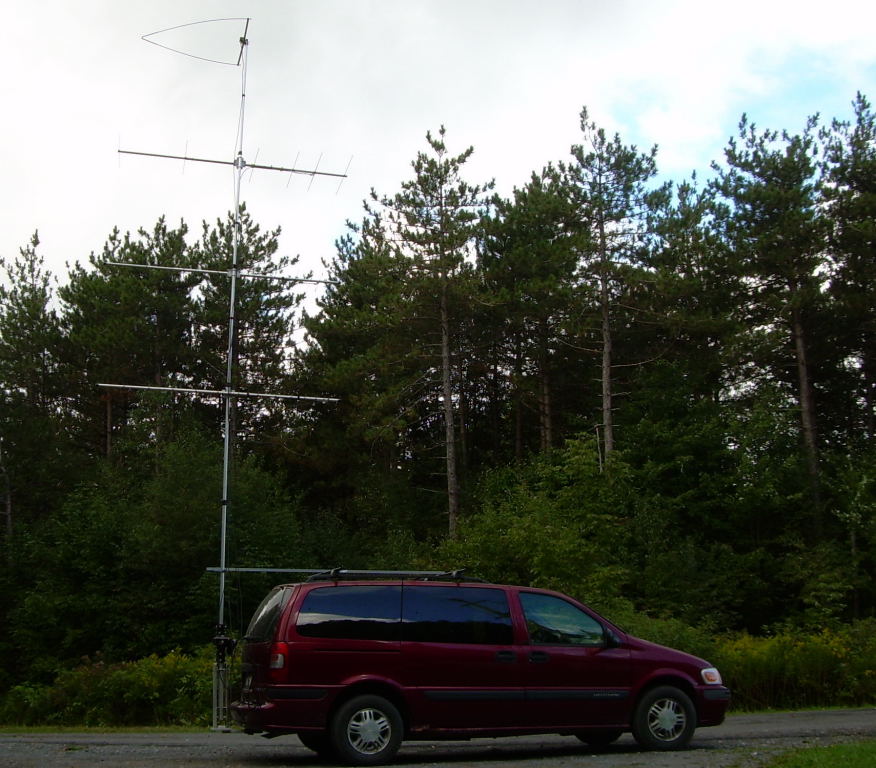