The annual ARRL September VHF Contest starts 2 pm eastern time on a Saturday, and runs through 11 pm the next day. I ran solo and checked out a new operating site which turned out to be a good location. The only equipment I had operational while traveling was 146.490 simplex, but that didn't get me any contacts.

The June 2004 VHF contest was the last time I activated FN11, and back then I just used a quick roadside pulloff area. This time I used a well-researched hilltop location and stayed there for a solid 3 hours. Since I was further west than I am accustomed to, I made sure to point the beams toward OH a few times, and it paid off with my best 2m DX for the whole contest being N8KOL EN80 (311 miles). But 6m was the surprising performer at this site, with almost half (48%) of my QSOs coming from that band (results are skewed a bit since I couldn't get 432 working properly). Best 6m DX was K1WHS FN43 (313 miles) and that would end up being the best DX of the entire contest. The reason this is a bit surprising is because 6m was the band with the lowest ERP:

Drove 2˝ hours to the FN12 site near Cortland, NY and set up in the dark with drizzle coming down and fog covering this hilltop as well. Still could not make QSOs on 432. Heard VE3WCC/B FN15vf on 2m. Called W4IY FM08 but they couldn't pull me out after several attempts. Since I was running a bit late, I began teardown after only 2˝ hours of operating. Could not get the 2m yagi off the "connect quick" plate on the mast and had to remove the whole assembly with a wrench. Thankfully, I knew I had an identical spare waiting at home. It's now after midnight and I started driving home and heard a noise I've never heard before. Not knowing what it could be, I pulled over to investigate and discovered a flat tire. Got out the compressor and filled the tire. Made it home safely and decided to get some good sleep and leave all worries for the next day.

Sunday morning the tire was completely flat. I went to the local service station which had just recently begun doing business on weekends (whew). There was a huge line of people in front of me, and I had to wait 1˝ hours for the work to get done, but the problem finally got fixed. Went home, had lunch, looked at the time, and realized the best thing to do at this point was skip the 1˝ hour drive north to the FN23 site, the hour of setup time, the 45 minutes of teardown time, and the 1˝ hours of travel time to the final grid. So now I can use all that extra time to give a better effort in my final grid (FN22). So I went out to the rover vehicle, replaced the 2m antenna with the spare, bypassed the faulty 432 amp, and headed for the final operating site. Took my time getting everything set up right since I didn't have to hurry anymore. Got out the compass, turned the beams north, reset the rotor to zero degrees. Got on the air and started making contacts at 1840Z. Worked W2SZ on 432 with good signals reported on both ends--alright, maybe 432 is finally working after 3 years of trouble. Worked K1WHS on 432 with good signals on both ends of a 248-mile path...wow, this is looking good. Worked K1TR FN42 who said 432 was my loudest band--OK, that's what I like to hear! PROBLEM SOLVED! Now it's time to go full tilt on 432 and make up for lost time. Some enhancement began setting in at dusk and the upper bands really started to come alive. By the time the end of the contest hit, 432 came in one grid short of a tie with 222! And the contest ended with a bang...I enjoyed a 4-band sweep with W3SZ FN20 inside the last 3 minutes of the contest. Nothing like a VHF contest with activity still pouring in at 15 seconds to go!

Total operating time was 13 hours 53 minutes (42% of the contest). That represents my biggest time spent in any event as a solo rover, and gave me my highest score yet of any contest. There weren't a lot of long-haul contacts made (best DX was 313 miles), so it was the high level of close-in contacts that moved this contest forward. There was no sporadic-E noticed on 6m, and no tropo on the higher bands, but the enhancement on Sunday evening was fun--I had to ask W1RT/R FM08 to QSY off 144.200 so I could work him without stepping on 2 or 3 other stations. He must have had QRM covering me up too because I didn't hear him on the new frequency. The official writeup is here and the scores for the Limited Rover category are here. 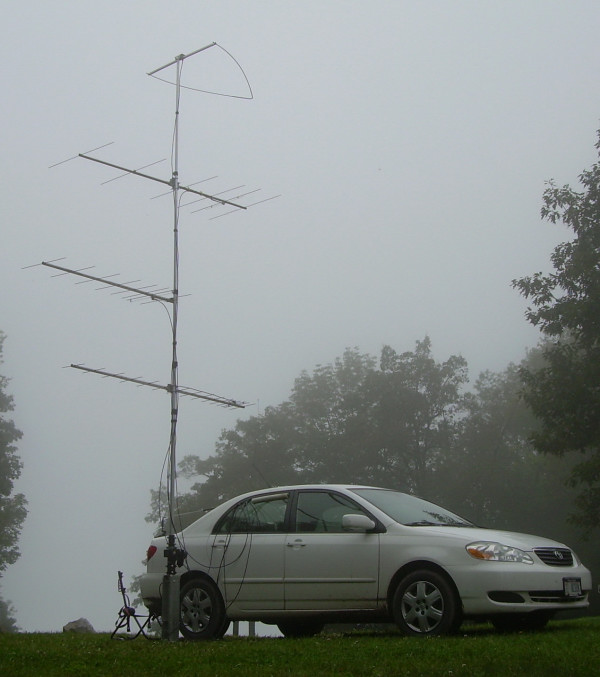