Here's my personal vehicle transformed into rover mode. The pic shows the 2m yagi disassembled into 2 pieces for transport on a bike rack. The trunk carries all the other antennas, some broken down into smaller pieces. Everything else is in the cabin of the car. Here's a pic showing the cramped quarters inside the 36 mpg Corolla. On the passenger's seat are the rotor control box, 222 station including external speaker, and digital voice recorder for voice keying.

The annual ARRL September VHF Contest starts 2 pm eastern time each year, and runs through 11 pm the next day, all on a weekend. This was a solo trek and the first contest with the new rover vehicle. I was also experimenting with some new coax that is thinner than the stuff I've used before. As it turns out, the thinner stuff is more susceptible to RF getting into the transmitted signal, but it's more flexible, doesn't suffer from connector breakage as often, and requires less of an opening in the car window.

I activated my home grid FN22 to start the contest. I made only one contact on 432 after about 4 hours of operating, and noticed the high SWR indicator lighting up on the amp. I decided that in the next grid I would try a different piece of coax (and I ended up with the same results). So then I knew it was a faulty amp. On the bright side, this was the highest elevation encountered on my trip, and the wind was as calm as I can ever remember at this site, so I was able to use the full extent of the telescopic mast. There was no 6m and 2m receiver desense this time either. Plus, I was happy to work someone to the north (VE3BSB FN14).

The next morning I activated FN23 in weather that hardly seemed like September. A heat index of 94 degrees was being reported by a nearby All-Hazards Radio transmitter. I set up the rover at an elevation just under 1800 feet above sea level and eventually managed to work K8GP on 222. The op said he was surprised by how loud my signal was. I should have told him that I was only running 35 watts. Then for a few seconds on 50.130 I heard W4NH EM85 calling CQ. Later I spun the antennas through the north directions and was happy to pick up VA3KA FN15. Surprisingly, this turned out to be my best grid activation in terms of QSOs, despite being the lowest elevation. I managed to snap pics of the rover antennas from the side and from below.

I was shocked to see that Tropical Depression Ike had re-strengthened to a tropical storm while entering Illinois, then crossed Indiana as a TS, then weakened to a TD again while entering Canada. The eastern fringes of this system went through FN12 Sunday and the wind gusts got stronger as the evening progressed. The NWS issued a wind advisory for high elevations in Cortland County, NY and I was setting up at 1980+ feet above sea level in that area (you can also read the Hazardous Weather Outlook from this time period). As a result, I decided to keep the antenna heights lower than usual by not extending the mast sections all the way out. Here's a picture showing what it's like to assemble a rover station at night. In this grid, only the bottom 3 band antennas are being mounted on a significantly shortened telescopic mast. I was glad I originally designed some overkill in this antenna system, because now it was time to rely on it. Anyway, I spun the antennas to the north again and worked VE3KZ FN03, worked VA3KA FN15, and heard VE2DC FN35. Then in true ham radio fashion, I got weather info relayed to me by W2RJO who was observing an Internet doppler radar loop--a mighty big help since all I have is NOAA's All-Hazards Radio frequencies. Finally, as I was getting ready to tear down and go home, I heard one of the most distant signals of this contest and it was KG4HOT FM07 at 363 miles (585 km) on 2m.

Total operating time was 9 hours 38 minutes (29.2% of the contest). That's almost the same as the previous September contest in which I participated (2006). This was the first serious test of the Directive Systems Rover Special yagi on 2m, and it appears to have worked nicely. The scores for the Limited Rover category are here.

unique grids worked on each band: 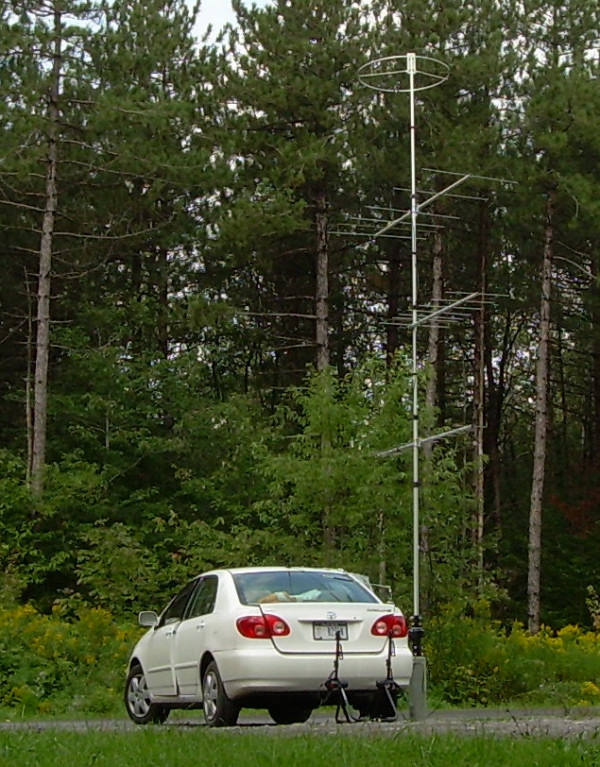