Normally we talk about whether 6m will open for the June VHF Contest. This year we wondered whether 6m would close! What we didn't have in pileup size or variety of locations was made up for in length of the opening. The band was open for what felt like 85 percent of the time that we were on the air. This is in keeping with an already stellar year, with an unexpected opening in rare early February and Costa Rica coming in during the spring 222 Sprint April 14th. Saturday we just happened to have the 6m 3-element Yagi pointed northeast trying to work another station in our home grid when we worked VE1CHL FN85 and knew there could be other possibilities in the same general direction as we've seen in past openings. Sure enough, we found our best DX of the contest on triple-hop by working Great Britain station G8BCG IO70 (3280 mi / 5278 km). This was probably the first European opening in our area in the June VHF Contest since 2012. We then worked VO1KVT GN29 which gave us another completely new grid field. Many of the Rochester rovers start the contest here in central NY, so we took full advantage and worked them on all possible bands when 6m closed for a while. We also worked a portable station on Mount Washington who gave us new grid FN44 on both 2m and 432 as well as our best DX on those bands (245 mi / 394 km). We were running 100 watts into a 12-element Yagi on 2m and 50 watts into a 13 dBi Yagi on 432. Six meters opened back up, and at 9 PM local time the ionization intensified; the path lengths got shorter than 500 miles for a few minutes as we worked several stations in the adjacent state of Ohio. The band stayed open in two directions at once (west and south) and the wide beamwidth of our 3-element Yagi was parked southwest to take advantage of both. The band stayed open right up to 10 PM (and probably beyond) when we shut down for the day. We were sitting at 5000 points and wondered if we were going to beat last year's score of 17K.

On Sunday we woke up to temperatures in the 30's and frost on the ground. Tom KC2SFU joined us and found 6m to be open with big signals coming out of Florida. The first contact of the day went into the log before 10 AM. Other operators for the weekend were Jon W2BDN, Jeff AA2YG, and Lu N2SLN. Then, just like the day before, the band simultaneously opened to the west. Around 11 AM local time the band took a quick dive so we grabbed 5 bands with KA2LIM/R who was easy copy from a 2000' hilltop in the clear in FN12. Early Sunday afternoon Tom thought to text Dave K1RZ FM19 and that move resulted in our only all-band run, plus our best DX on 222 and the microwaves (234 mi / 377 km to the state of Maryland). We had 130 watts into a 9.8 dBi Yagi on 222, 75 watts into a 19-el loop Yagi on 902, and 25 watts into a 25-el loop Yagi on 1296. In the 8:00 hour we ran into double hop to the west on 6m and picked up two new grids in rare South Dakota, giving us our first contact into the DN grid field. In the 10:00 hour 6m weakened a bit so we picked up some more local activity on the higher bands. Six meters was still hopping as we shut down Sunday night. We almost made it to 6m VUCC in one weekend (3 grids shy). Not bad for 100w and a 3-element Yagi. We lost a couple of 6m contacts due to logging them as 2m contacts, so perhaps next year's improvement will be to get the software to read band and mode data from the TS-2000. This year's improvements were a headset and footswitch; it was great to have both hands available for fast logging. Thanks to the following 9 rovers for all their help: KA2YRA/R, KF2MR/R, KV2X/R, K2QO/R, K9PW/R (only station worked in EN53), KA2LIM/R, NV4B/R (only station worked in EM61), NU4E/R (only station worked in EM85), and K9JK/R (EN51). With Mount Greylock, MA shut down due to COVID-19, there was no W2SZ/1 FN32, and same goes for Camelback Mountain, PA and the Packrats multi-op station W3CCX FN21. That means the smaller multi-unlimiteds like ourselves will be moved up a couple spots this year! 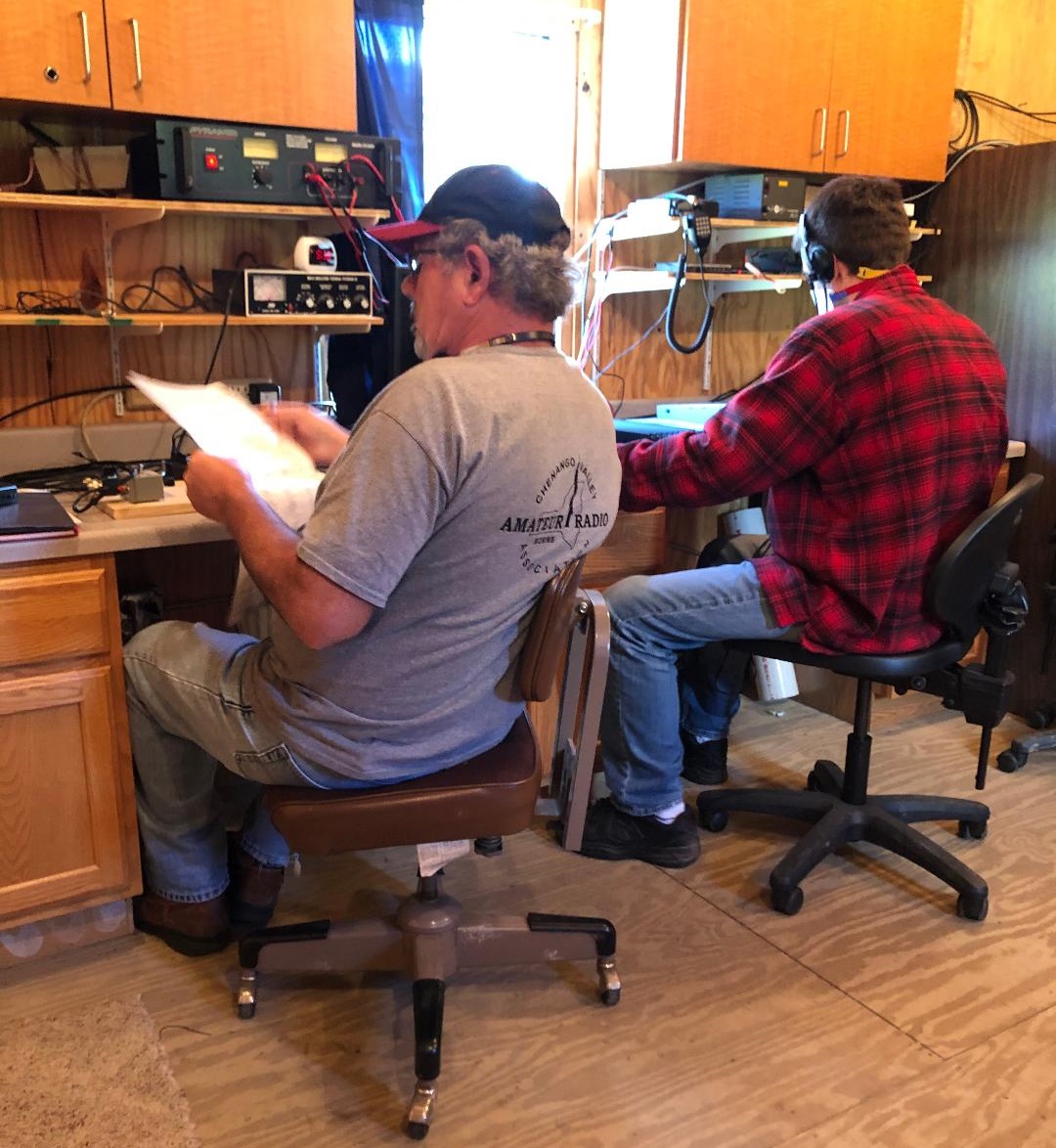 photo courtesy of Jeff AA2YG at the 222 station