OPERATORS FOR THIS CONTEST


The wx reports being given the weekend before the contest did not sound good for Saturday. We already had to skip the 2019 version of this event due to a snowstorm that locally produced the highest 24-hour snowfall for all of 2019. We customarily hit the southern latitudes on Saturday where the wx is likely to be better, but this time it was the opposite: The NWS digital snowfall prediction map was showing deeper snow for our PA locations than the NY locations for Saturday's winter storm, but neither location looked good enough for safe roving given the RWD cargo van with no snow tires and no weight in the back. Friday evening we decided to cancel Saturday's plans (central and northeast PA) and focus on Sunday's plans (central NY) even though lake-effect snow showers were predicted for Sunday.

We really wanted to test our new rooftop antenna system for RV2 because it cuts down significantly on setup time. Our usual Sunday morning FN23 location was forecast to get twice the amount of snow as anyone else from Saturday's storm, so we decided to try a different site further southwest where the main lake-effect band would not be hitting. A QSO with someone in the worst-hit areas later confirmed that 15-18 inches of snow had fallen Saturday, proving it was a great move to use our secondary site. The problem is that the secondary site means a roadside operation. Without an opportunity to use our side-tipping system, and not having a rearward-tipping system, we resorted to the permanently-mounted loops for the bottom 3 bands. One highlight of this grid activation was briefly hearing Ohio contest station N8GA on 6m from 458 miles away. I called, but conditions dropped out.

Next we were headed for another new site (in FN13) which was nothing more than a parking lot in a somewhat remote area. It was a low-elevation site surrounded by trees, but there was some privacy. Our goal was simply to assess the site in order to see whether it's worth using in the future. When we arrived, there was a gate across the access road and the site had not been plowed. So we had our answer very quickly--this site is a no-go in January.

Our third site was to be our usual FN12 location, a hilltop that once included a Western Union microwave relay station which went silent in October 1988. Thanks to Thursday's Winter Weather Advisory in this area and Saturday's storm, there was significant snowfall on the access road leading to the hilltop. We couldn't get to the summit and didn't go with Plan B either, which was to use the access road itself as a place to set up the bigger antennas on the lower 3 bands. This was another good move, because we later saw someone plowing the access road which would have required us to shut down our operations and move out of the way. There is a cell tower at the summit, and the telecom company that owns it probably pays someone to keep the area plowed for fastest possible resolution of equipment problems. We set up on the side of the main road instead (see photo). Despite the fact that the summit was now blocking the easterly directions, the shot to the west remained good. We proved it by working N2OA FN03 on the bottom 3 bands on our loop antennas. We completed on 5 out of 6 bands with K2UA FN12 from here, too. That was a fun one because my first 222 equipment purchased in 2002 was from Rus. Thankfully, a plow came by and cleared the road for us after a while, although the van still had trouble with the rear of the vehicle trying to swing sideways on the steep descent when leaving the site.

Our final grid activation, FN22, was upon us. This was expected to be the one chance we had to set up the big antennas. We had asked a friend to plow the access road to the summit. He plowed it, but the ferocious winds and lake-effect bands on the backside of Saturday's storm had already caused new drifting to cover half the width of the roadway. We didn't bother to check the area near the top which is famous for getting 3 very deep snow drifts all the way across the road. Even if we had a way to get to the summit, we probably would have been sealed in with the passage of enough time and would have had to dig our way back out. So the decision was made to do a roadside operation again. MobileComm1 took the shoulder of the high spot on the main road, and RV2 took the base of the access road. Much to our surprise, 6m had a weak band opening and we worked two stations on skywave--EM56/57. Another highlight was working 237 mi / 382 km to Maryland station K1RZ FM19 on our 222 loop. Activity levels were horrendous, with some of our lower bands going an hour or more without a contact, and no microwave contacts at all from this grid. At 9:30 PM local we hoped that the end of a football game would create an increase in activity afterward, but it did not. At the 4-hour point we weren't making any new contacts, so we pulled the plug at 10 PM and said goodbye to the most difficult January VHF Contest that some of us have ever seen while operating away from home, going back to the 1990's. Despite all the challenges, N2SLN/R ended up winning the Atlantic Division and was the northeast regional leader (New England, Hudson, Atlantic divisions; Maritime and Quebec sections) https://contests.arrl.org/ContestResults/2020/Jan-VHF-2020-FinalQSTResults.pdf and our claimed score remained unchanged for the final score. 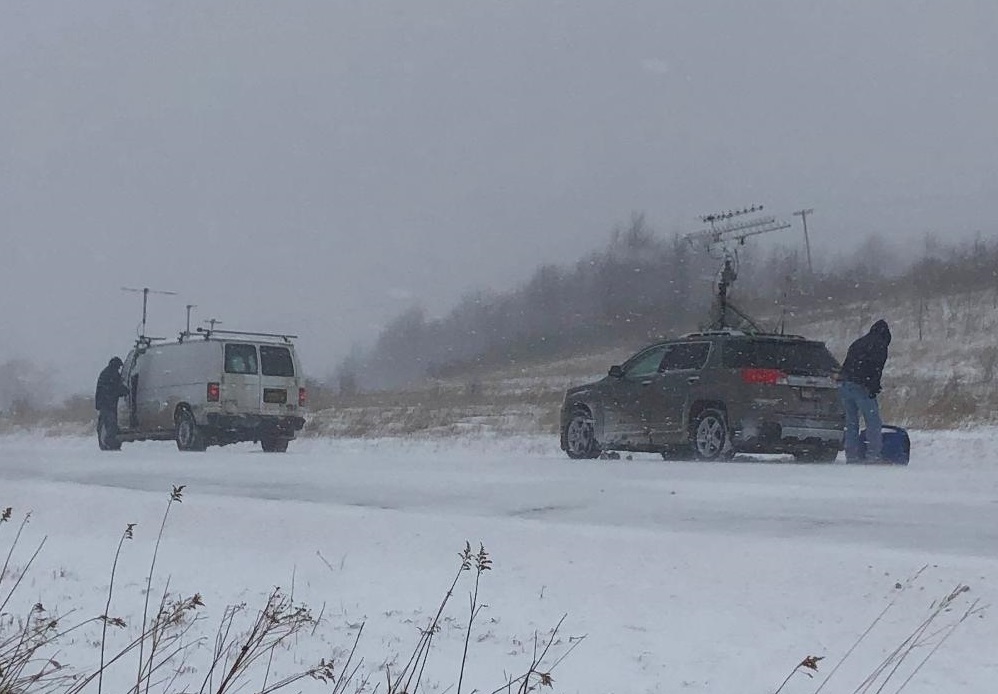