the price of gas in central NY leading up to the contest: CHANGES TO THE ROVER STATION
During the fall VHF sprint season 2014 I used a hilltop that I hadn't used since before the changeover from analog to digital television. During those years, the situation changed to the point that I was now getting not only digital TV interference, but also intermod on 222/432. Since I had just ordered bandpass filters for 6m/2m in order to try getting rid of 2nd transmitter interference within the rover vehicle, I decided to order two more for the upper two bands to see if I could get rid of the TVI on 222 and the intermod on 432. I managed to get 3 of the 4 filters shipped and installed in the rover vehicle before the January VHF Contest, but now it was time to see if those improvements would actually work. I also replaced a few jumper coaxes inside the van with double shielded Andrew CNT-600 (similar to LMR-600) in hopes that it would help prevent RFI. Other changes for January included a vent mount (which we don't recommend) for the faceplate of Tom's remote-mounted FT-857D, a voice keyer for his radio, and footswitches for both our stations. We attempted a dry run of some of the newly configured equipment on the Sunday before the contest but the snow drifts were too deep on the access road that leads to our local testing grounds. We did the best we could through Thursday trying to chisel away with our shovels at the now hard-packed snow drifts, but realized on Friday it wasn't going to be available for testing nor for the contest. Luckily we had a Plan B.

ROVERS: START YOUR ENGINES
We did our usual thing and headed south into Pennsylvania Saturday morning in order to enjoy the less severe roving weather. It was a close call, though, because we were sandwiched between an ice storm to the west, and a nor'easter to the east (and a blizzard approaching the east for Monday). But there was no significant precipitation coming down at our locations in central PA, and there were even stars visible in the night sky in FN21. We started the contest at a spot in FN20 that doesn't have much privacy for an extended stay. As a result, this was a site at which we intended to use smaller equipment on limited bands for only one hour. The first hour was strategically the best time to do our shortest grid activation, as it would likely also be the busiest hour of the contest nationwide. For the rest of the event we would use our usual bigger antennas, operate all four bands, and stay longer at each site. In December we discussed the possibility of assembling a quick-deploy system just for this first grid. The idea was to get at least 6m/2m on the air with an antenna system that can be stowed quickly after use. We talked about assembling tip-up systems mounted to the round crossbars of the roof rack, but ultimately we went with a small drive-on mount and 21-foot telescoping mast. It was a simpler solution since I already had everything needed to make it work. This system was a success on 6m, but the performance of the 2m stacked loops wasn't as good as we thought it should be, although we did work two grids away with it. Privacy turned out not to be an issue, as an unexpected fog rolled in and reduced visibility to something less than the distance back to the main road from where we set up. We noticed a trace of freezing fog dropping off the feedlines as we rolled them back up for storage. Overall we worked one contact every 79 seconds for almost an hour here, giving us a good start to the QSO count with minimal time needed for teardown afterward.

Next we moved to a higher elevation site, and this one was in FN10. This site always gives us a "top 3" grid activation in terms of sheer number of contacts, so spending at least two hours here seemed like a good plan. We set up the full system which in January consists of a single directional antenna for each of the bottom 4 bands all on one mast for quickest possible deployment in ferocious weather. We reeled in almost 70 contacts which we would find out later was our highest QSO count of all our grid activations (even higher than our longest duration grid). We wished we could stay longer, but there was still one more grid to activate before heading home for the night.

Back in December Tom was already getting us permission to use the same FN21 site we used in September 2014. We did our homework and stopped there in daylight on the way south so that we would know many of the challenges ahead of time. Apparently the Saturday morning nor'easter didn't miss this location; there was more snow here than in central NY, although the site was plowed. After shoveling a spot for our tiltover antenna system, we got set up and began operating, wondering whether the bandpass filter would prevent the digital TV interference that plagued us on 222 MHz in the past here. Unfortunately, it did not help. I think it's because the preamp is too widebanded. It is amplifying out-of-band signals as well as the desired signals, before trying to cram it all through the bandpass filter. The next rover vehicle will have to be configured with an outboard preamp located after the bandpass filter in the receive chain, so that the preamp is only amplifying a narrow signal. The performance on 6m/2m was great, though. We worked four grids away to Virginia station N3MK (FM27) on both bands. We were lucky to pick up FN00 before multioperator station W3SO shut down for the rest of the weekend due to the ice storm. Another highlight was hearing W1AW/3.

After a 4.5 hour nap Sunday it was time to get up and shovel the driveway so we could get the rover vehicle back out of the garage and make it to eastern FN12 on schedule. The access road had been plowed, but there were drifts already re-appearing on the windward side of the road. We made it to the top and picked the spot farthest from the power lines. The hilltop that we use is such a strange location--it does have some foliage in many directions but produces great results as long as the activity level is there. Propagation was good to the west: We worked a Canadian station in EN92 on all four bands from 218 miles away. But we still weren't working any long-haul stuff to the east. Three hours and 51 minutes is a long grid activation and we should have had more than 68 QSOs from this great site. The nor'easter must have drained all the moisture out of the air toward the east. Looking back, we should have got another hour of sleep and skipped the dismal 11-QSO first hour. The highlight of this grid activation was working the 316 mile contact with K1TOL in Maine and providing him with a new grid.

Next we drove back toward the east to our home grid FN22. Our primary site was unavailable for a second year in a row due to deep, hard-packed snow on the long access road. But Tom had been in touch with someone who was able to plow our secondary site, and it was a relief to see it in great shape when we arrived. It was all worth it, because we talked to one rover who said we were the only FN22 contacts for him. Also, we were delighted to work a new ham in semi-rare FN23 who was trying the January VHF Contest for the first time. Our best DX from here was our 239-mile contact with Maryland station N3HBX FM19 on all 4 bands. Overall this site performed well and provided us with 50 QSOs. This was probably the grid activation that had the best weather of the entire contest--no wind and sunny.

At this point Tom needed to return home, so we removed his equipment and re-wired the rover gear for single-operator roving. I drove 90 minutes north and when I got to our FN23 location for the final grid activation, it appeared as if it hadn't been plowed. I turned the vehicle around and came back to get a better look with the headlights pointing right on it, and there was a small section that had been plowed, with a narrow path leading to it. I managed to get the van situated in a good spot and set up the antennas. Despite being on the air for over 3 hours in a somewhat rare grid, contacts were sparse. I was making contacts at a rate of one every 5 minutes. Thankfully, 78 percent of my contacts came from all-band sweeps, showing that the site was ready to perform had there been better propagation. Despite the typically difficult January propagation, I did work a 296-mile contact with Maryland station K1RZ FM19 on all 4 bands. That's a pretty big deal by January standards. We had to use CW on six meters because that band was now getting hammered by S9+10dB noise from the 100 kilovolt power lines nearby. At this hour on a Sunday night, lots of folks are going to bed and relying on electric heat to battle the zero degree weather. At 2300 local time I began tearing down the antenna system but had to stop twice to get inside the van and warm back up. Typical January VHF contest stuff. The official results are here and they show that we had the highest grid count in the nation.

The January VHF Contest 2015 will be the last trip taken by MobileComm1, the dedicated VHF contest vehicle that has been heard around the world on VHF, providing many fun contacts, grids, and points from 2009-2015. It's getting old and is in need of retirement (just like its owner). A cargo van will be replacing the minivan, so a few design changes are needed before the work can commence, but look for N2SLN rover and portable to eventually be back on the air louder than ever. 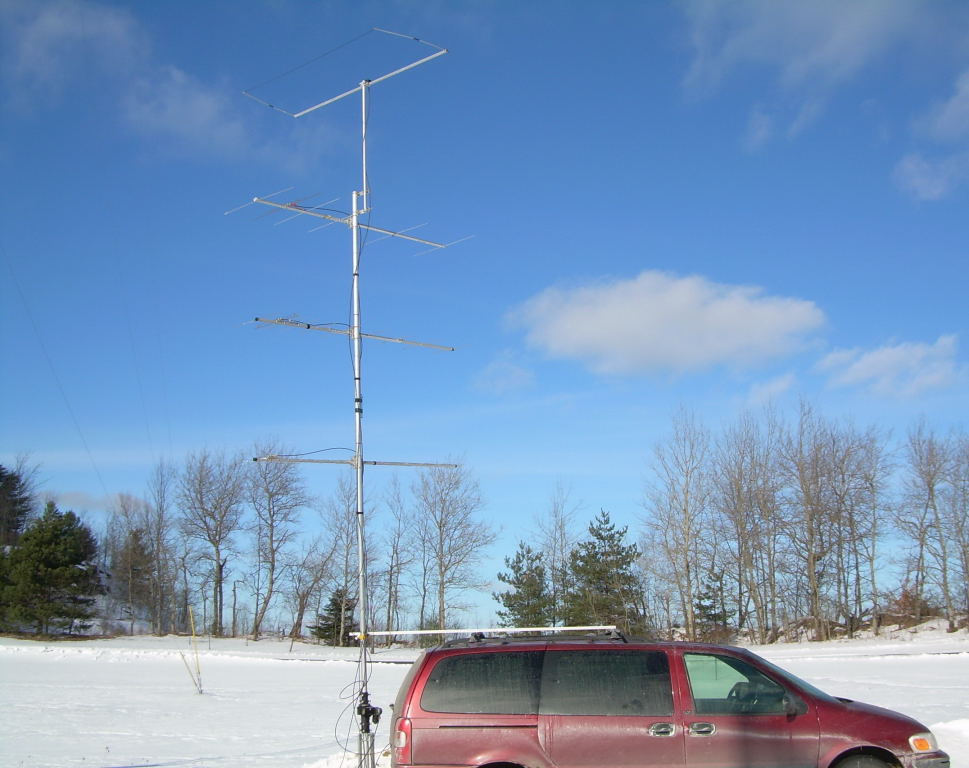