Hot on the heels of my best September rove and fall sprint season ever came the planning of the January 2014 VHF Contest. I knew that we would not still be in the midst of the multi-month climate anomaly that caused the stellar fall 2013 tropo season in the northeast. That came to an end some time in October. In addition, January was not likely to produce sporadic-E on 6m, especially near the peak of the sunspot cycle, since the F2 layer acts as if it borrows energy from the E layer at that point in the cycle. So we focused on three things to improve our game: 1) moving up into the 2-transmitter category in order to increase our presence in each grid, 2) roving closer to areas of higher population density (as K1DS/R recommended to me years ago), and 3) working on securing rover sites that are free of obstructions rather than just high in elevation, so that the upper bands have a chance to shine. In addition, roving in southern latitudes in January gives a better chance for milder wx (by about 1 degree F for every 50 miles, which is about 74 percent of a grid height here in the NY/PA area). I tried roving farther south than usual in January 2011 and loved it so much that it has become a regular objective when planning each January VHF Contest.

Getting a second transmitter onboard was quite simple: I wasn't going to be using the 6m amp in this contest, so the PowerPole connector for that amp's fan was now available for Tom's FT-857. Adding a 10-ft PowerPole jumper to reach the passenger seat was all we needed for power. The only other consideration was a 12-ft coax jumper for his radio to reach the amplifier in the back of the van. We dialed in the correct transceiver power levels for each band and we were ready to rock-n-rove.

Goals 2) and 3) were reached the first day: We rolled into PackRat VHF territory in FN10 where we knew there would be lots of folks on the air for the contest. We got the antennas set up, turned them north, and reset the rotor control box to zero degrees. Tom had communicated with a nearby business owner several weeks prior to the contest who allowed us to use their property in FN10 for a couple hours. Activity levels were through the roof compared to what we're used to back home in central NY. This grid activation ended up providing us with our 2nd highest QSO total of this contest. We even heard Missouri station K0TPP EM48 briefly on 6m. One station did not have SSB on the 220 band and requested that we try FM simplex. Luckily our SSB yagi has enough bandwidth to cover the FM portion of the band, but it's horizontally polarized, and most FM activity takes place on vertically polarized antennas. We tried it anyway and successfully made what would be our only 220 FM contact of the contest. This was an important contact because we had been wondering all along whether our equipment would work in this situation, so we were happy to see that it did.

The next goal was to move as quickly as possible to a site in northwestern FN20 since it was only a few minutes away. We needed to make at least one contact from there so that we could actually count the grid in our list of activated grids, but we didn't want to use up lots of time setting up the full equipment. So the plan was to set up a magnet mount system with just 144/432 loops on it and make whatever contacts we could with a barefoot transceiver for a half hour. There was QRN at this site, but we already knew that because we took an exploratory trip here 3 weeks earlier. We just picked frequencies between noise spikes and survived for 30 minutes. K2LIM FN12 was S7 here from 103 miles away. Both FN10 and FN20 were all-time new grid activations for N2SLN/R.

We began heading back north but our day was far from over. Our next big challenge was to try working someone during the miniscule amount of time that we were going to be traversing the southeast corner of FN11 on Interstate 81. When we were still in FN20, Tom asked N3RN FN11 to try listening for us on our 2m run frequency, and we would call him as soon as we entered FN11. He agreed to try helping us. Well that turned out mighty fine, because just as we were approaching the grid line, there he was, asking if the frequency was in use. We told him to stand by a moment as we were just about to enter FN11. The display on Tom's smartphone suddenly changed to FN11, we made the contact, and now FN11 is in the bag. Thanks to N3RN for accepting and then honoring our request.

We still had to visit our northern FN21 site and set up the full equipment. This was another site on private land that Tom got permission for us to use. This was the site that gave us our highest QSOs per hour during the most recent September VHF contest. Although it wasn't realistic to expect the same results in January, it was the highest elevation we would encounter in this contest, and foliage attenuation is lower here than at some of our other sites. We were able to position the vehicle just right and didn't need to waste time using our leveling blocks. Unfortunately, 432 became unusable after a few minutes due to RF starting to feed back into the system, so we were not able to realize full potential here. It was at this point in the contest that we began noticing a pattern that had showed up last January, too: Signals were propagating alright N/S, but terrible E/W, and that was on all 4 bands. But we finished the day on a high note by remaining unaffected by the clipper system that was providing us plenty of worry the day before the contest. More than one contest station to our east reported that their snowfall from the same event was a wetter snow and that there was more of it. We were just plain lucky to be roving in the right spot this time (except for the southern California pack rovers who had 80 degrees and sunshine). [NOTE: On our way home for the first night we hit the biggest pothole of all time on the interstate--big enough that it broke a coil spring on the van although we didn't know it. It broke in such a way that a sharp point ended up slowly digging into the tire many weeks later. Thankfully the problem was noticed before there was a blowout--I had a new strut assembly and tire installed and MobileComm1 was back in business.]

Sunday morning we drove north into Lake-Effect Snow country, the western half of FN23. We set up on a roadside pulloff which has a good shot to 3 of the 4 main compass directions. Leveling the vehicle is always tough here, but luckily the 2-inch OD mast system and rotor can take quite a beating. This site would end up having the highest wind gusts of all our sites in this contest. We oriented the van so that the rooftop horizontal stabilizer would have maximum effect in helping the mast fight the wind. The upper bands were working particularly well from here--we worked a 300-mile contact into Maryland on 222. We also worked into FM18 on 2m, which was our best DX (319 miles) from this grid. We also heard another brief 6m ionoscatter signal from Tennessee station N4QWZ EM66. Signals finally started coming in from the eastern grids here, too--FN32, FN42, FN33, FN43--all the stuff we missed Saturday. We stayed extra long at this grid incase folks were looking for FN23, and were happy to hear many stations thank us for a new one.

Next we were heading west and would drive through FN13 for less than a half hour. That means we needed to do everything we could to make one contact in order to count FN13 as a new grid activation. K2LIM FN12 was in and out as we approached the grid border and we were hoping that they would hear our puny signal. Just as K2LIM's signal came up, our grid changed to FN13. Tom jumped in there and made the contact, and now FN13 gets added to our list of activated grids. Not bad for a quarter wave mobile whip antenna.

We continued south toward FN12, and upon arrival at our primary site, the access road was starting to get drifted over. We began giving some thought to using our secondary site instead, but the rover van does surprisingly well in snow, so we gave it a try since a snow shovel is part of the gear we carry in January. We got up some momentum and blasted through the drifts, successfully making it to the top of the hill, although when we got to the top, the snow was one big drift--and it was too deep to allow us to use the leveling blocks. So we found the most level spot we could and hoped for the best. Although this site didn't have the wind gusts of FN23, it probably had higher sustained winds, and much deeper snow. Unfortunately, the final position of the van did not allow the rooftop stabilizer to provide any help to the mast, so we put a guy rope on the bottom of the rotor and pulled the antenna system toward the west to help it fight the incessant west wind. All the hard work paid off, as we ended up with our highest QSO total here (83 QSOs), something that would not have been possible at our secondary site. On 2m we were able to work 3 stations in FM18 and heard Virginia station N4HB FM17 on 6m/2m from here (325 miles).

We knew we would be tired, so we saved our home grid FN22 for last. Unfortunately, our primary site was unavailable due to even bigger snow drifts on a much longer access road. Another operator attempted access here Saturday and had no luck. So we drove to our secondary site which doesn't even have an access road and it still required some shoveling. The wind was quite bad here even at reduced elevation, and we installed a guy rope to the west again to help the antenna support structure. There's a pretty good shot to the south from here--we were able to work into the FM19/FM29 area on 144/222/432 and heard N4HB again on 2m. On 6m we worked K1JT, the inventor of the WSJT digital modes which were originally designed for VHF weak signal work (some of which are now becoming popular on HF).

Pulling off 8 grid activations (622 miles of driving) is a first for N2SLN/R. Actually, anything over 6 grids would have been a first, and it is especially noteworthy that it happened in a January contest when activating grids is already more difficult due to wx. Winter 2013/14 has been a strange one with Wind Chill Warnings issued twice in 5 days and a bunch of oddball freezing fog events that we normally never see, not to mention an active pattern of winter storms in Nov-Dec 2013. The Solar Flux Index broke 200 for several days in the first half of January and an X1.2 solar flare erupted on January 7th. But by contest time, the SFI dropped below 150 again. There would be no aurora, skywave, or tropo during this contest. N2SLN/R ended up being the national multiplier leader for this event on 50 / 144 / 222 MHz in the limited rover category. 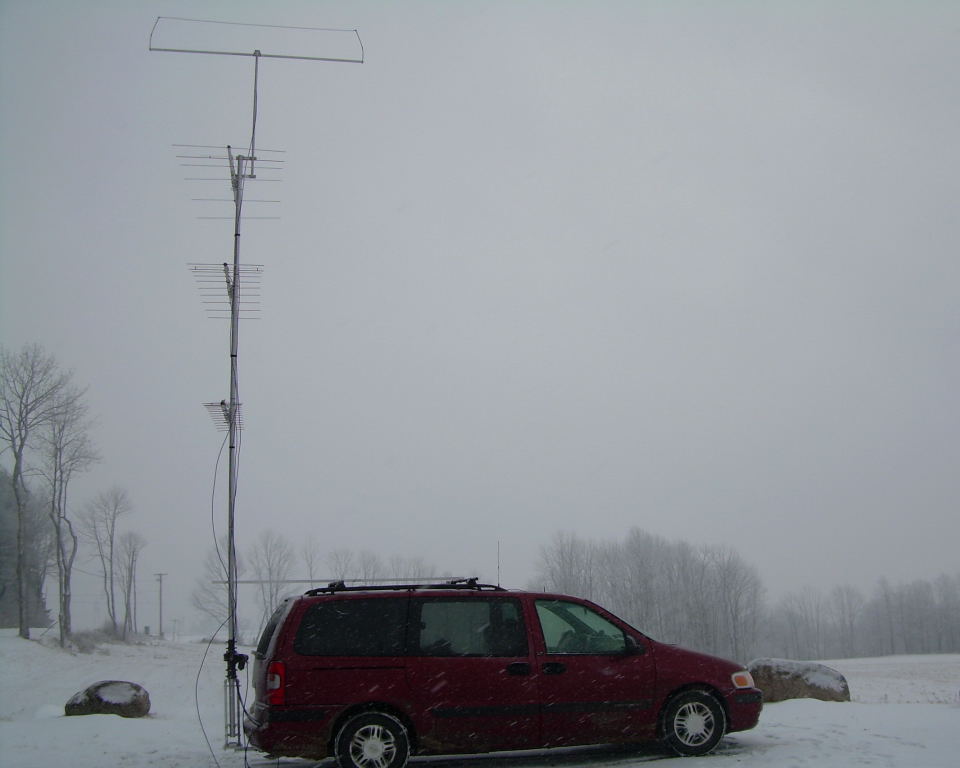