In December I still wasn't sure what kind of effort I was going to launch for this contest. By January it was beginning to look like a serious effort would be needed. First of all, Tom KC2SFU, indicated that he wanted to ride along and see how a rover-limited operation is done, so that means extra incentive to do well. Second, all 4 bands were working for the first time in a January contest in about 5 years. Third, the weekend before the contest brought temperatures in the high 40s both days, including an overnight temperature above freezing, so lots of snow disappeared quickly, helping to clear the way for our upcoming efforts. But according to the Hazardous Weather Outlook that was sent out later in the week, high wind gusts were forecast for Sunday, the enemy of stop-n-shoot roving. This would have been manageable with the 2" OD mast system, but none of the small, low-wind-load 6m antennas will work because their supplied mounting hardware can only handle small mast diameters of up to about 1.5 inches (except the Gulf Alpha 6m Moxon which will handle mast diameters of 1.25 to slightly over 2.0 inches, but I don't own one of these yet). So the telescoping mast with its smaller diameters would have to be used, and we would just extend it to less than full height on Sunday for added strength against the high winds, as well as change from a 6m Par Moxon (7-ft square boom) to a Par loop (3-ft square boom) for lower wind load.

In the final few days Tom closely monitored the condition of two rover sites and I did the same for two other sites. A 2-foot snow drift was still blocking access to our higher-elevation FN22 site on Tuesday, and more snow fell Wednesday, so with no more melting in the forecast before contest time, we decided to go with our backup FN22 site. Tom completed some final testing of his battery system and calculated that we should be good for a few hours of 6m transmitting at full power. We were now ready to rove.

Arriving at the FN12 site Saturday, there was no 8-foot mound of snow left by the snow plows at the turn-around area beneath the summit like in most other years. This means we can drive further up the main road for inspection of the unplowed access road, which turned out to be in good enough shape for us to blast through the initial roadside snow build-up and reach the summit. We leveled the rover vehicle and set up the antennas under clear skies and mild temperatures at just under 2000 feet ASL.

Tom hit the power button, but there was no power. Murphy has struck. After 10 minutes of testing each component of the system separately, the problem is discovered and we are in business. With two operators, one person can stay devoted to 6m incase of sudden band openings, and sudden is what we had: ONE contact via sporadic-E into Nebraska and then that was it. Then we began working K2LIM through the bands, and the 2m amp suddenly killed our receive and there was no relay click on transmit. Murphy number two. Turning the amp off and running just transceiver power enabled us to make some limited contacts. Then we got to 432 and when that amp clicked into transmit mode, there was meter deflection on the transceiver's RF meter, but I wasn't talking (and there was no other noise inside the van). Must be RF getting into the system. Murphy number three. Bottom line is that the brand new 432 amp can't be used and will have to be bypassed. But then we cannot locate the correct adaptor, so 432 is down for the rest of the day. No FM contacts are made from here. The highlight from this grid activation has to be the contact with N2SPI / mountaintop QRP Portable who was putting in a 5x9 signal on 2m from 74 miles away (no preamp). Best DX (heard only) from this grid on 2m was N8ZM EM79 (464 miles). We operated 3 1/2 hours from this grid.

Waking up extra early Sunday, I began studying the wx forecasts, and saw predictions that would scare a polar bear. A rare Special Weather Statement warned of a "dangerous snow squall" hitting the areas where we had planned to travel at the time we planned to travel them. The radar loop confirmed a very intense, narrow band of rain turning into snow, with more snow moving in behind it. A Lake-Effect Snow Advisory was issued for several counties, including our FN23 site, for 4-8 inches of snow which was forecast to start as rain and change to snow while we were to be there. A wind advisory was already in effect for wind gusts over 50 mph. So the decision was made early Sunday morning to activate FN22 first, then see what the afternoon would bring regarding conditions to our north.

We got to our FN22 site, an exposed hilltop over 1800 feet ASL, and despite positioning the van with a corner facing the wind, it was still being rocked by the wind gusts. The original National Weather Service forecasts mentioned that the highest wind gusts would be occuring around this time of day, so a low-height 6m and 2m antenna setup was all that we would dare to try. In the end, Sunday's highest recorded wind gust at the Binghamton, NY National Weather Service Forecast Office (200 feet lower in elevation) would be 46 mph at 8:49 AM Eastern time which is not long after we finished setting up the antennas and got back inside the rover van to thaw out. Toward the end of our stay, 6m opened just long enough for us to copy W9EWZ EN52 and W4IMD EM84 into our log, then the band died again. The Solar Flux Index was not as high for this January contest as the last one. We operated 3 hours from this grid.

We looked at as much wx info as we could get on Tom's smartphone to try deciding on whether to make another attempt at an FN23 activation. Unfortunately, not much had changed. The latest radar image showed that although the front had passed east of Albany, NY, the lake-effect machine was still chugging along, producing snow north of Utica, NY where we had hoped to go. Rather than get tangled up in that mess, we decided to scope out the areas farther south in FN23. We investigated a few sites just over the border from FN22 and decided we would set up only the 2m antenna at one of them, as the temperature had dropped with no change in the extreme winds. For the first half hour we struggled through a couple contacts, then around 2100Z we noticed a deep-QSB phenomenon on north/south oriented paths only. When stations several grids away were riding the crest of the QSB wave, they were coming in extremely well, but when they were in the valley of the wave, they disappeared off the face of the earth. This happened first with N3HBX FM19 in Maryland (279 miles), who was as high as 5x3. Then a few minutes later came W3SO FN00 who was as high as 5x7 from southwestern PA, and I was not using a preamp. We finished with some CW QSOs which netted us a new grid, and figured that was a good note on which to end. For one last time we turned the heat on high, put on the hat and gloves, and went outside into the excruciating wx to pack up the gear. Despite the difficulties like not being able to deploy all bands all the time, this contest effort would bring the best January claimed score for N2SLN/R so far, the high score in the Atlantic Division, and the highest 2m grid count in the nation. 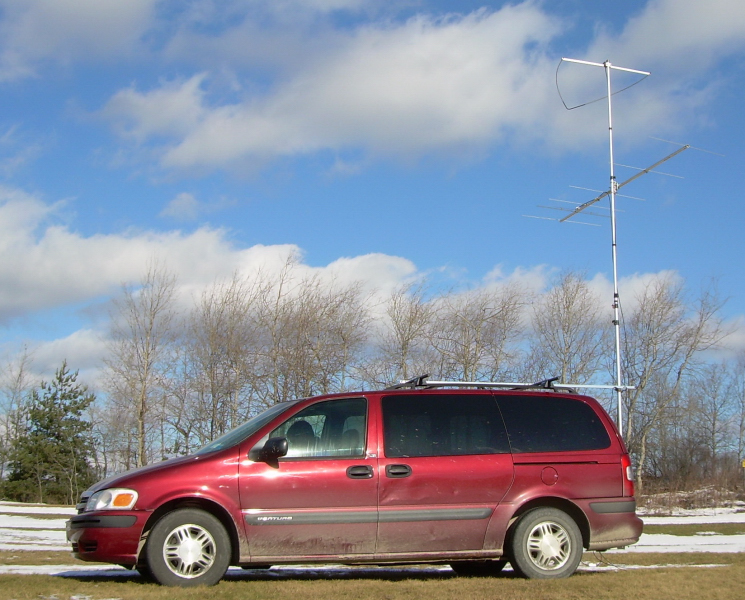