N2SLN -- most planning and operating, all driving and paper logging, under the callsign N2SLN/R
KC2SFU -- some planning and conquering of adversity, some operating, major equipment contributor for FN23 activation

I decided that this would not be a serious effort. I was going to use the contest to try the new antenna configuration. A last-minute change in plans had me cancelling the FN21 activation due to an "80 percent chance of moderate accumulation" in that area and others along the way, as well as mixed precipitation as outlined in the Hazardous Weather Outlook. So I drove to eastern FN12 and operated in the snow plow turn around area just beneath the summit that I normally use (which is inaccessible in winter). I enjoyed a first: not getting out of the vehicle to set up any equipment! For 11 years I've been roving as a "stop-n-shoot" rover, meaning lots of time spent setting up and tearing down support structures/antennas/feedlines at each site. The cold January contest was a perfect choice of a contest to try the first deployment as a "run-n-gun" rover who gets to stay inside and enjoy the warmth. Six meters was open to 5-land but I was not able to get anyone's attention whether I was calling CQ or answering CQs. On the other hand, it was fun to suddenly hear a group of hams on 2m SSB from northern NY with good signals. I was able to jump in and work one of them: K2DLW on 6m/2m in eastern FN13, an area that over the years has been elusive despite the higher population density of the greater Syracuse, NY area. I operated for 2 1/2 hours at this site.

After a zero degree night at home, I went out Sunday morning to start the rover vehicle and the "check engine" light came on and the engine was running rough. I didn't want to risk a dead rover vehicle on some roadside far from home, so I just assumed that this was going to be the end of the contest for me. I turned the rover antennas toward KC2SFU and told him why I was going to have to cancel our FN23 plans. In true ham spirit, he welcomed the adversity as a challenge and suggested we take my new commuter vehicle instead (no ham gear installed yet), and he would supply batteries, portable transceivers, and antennas if I could bring the antenna support structure with attached rotor. Next thing you know we are making the trek northward to just outside the Adirondacks, and while setting up, we were treated to quite a sight: A bald eagle was flying very slowly nearby, just 5 feet above the treetops across the road. We were limited to 2m/432 only at this location, but I was thankful to be on the air at all. We had only 3 elements available on each band, but were still able to work 224 miles on 432 (using only 20 watts). On 2m we were happy to be able to work N3RG on CW who was 276 miles away in FM29. We were also delighted to find a surprisingly high number of FM simplex contacts on both bands despite the horizontal polarization of our dual band antenna. It was great to hear the callsign N2PA back in the mix again after a few years of absence. He said he was operating from a different location (his home station), waiting to see how many other operators showed up. Another contact of note: We provided KA1ZE/3 FN01 with his 59th grid on 2m.

After I got home and had dinner, I went out to the rover vehicle to see if it was going to run rough again, but it was running fine this time. So I got on the air and then noticed that the rotor was no longer working. Luckily, the antennas were stuck south which is probably the best direction from the home QTH. So I spent the last few hours of the contest operating from the driveway, giving out FN22 to whoever I could work on 6m/2m/432. It's just as well, since there was freezing rain predicted for that time period. Results are here. 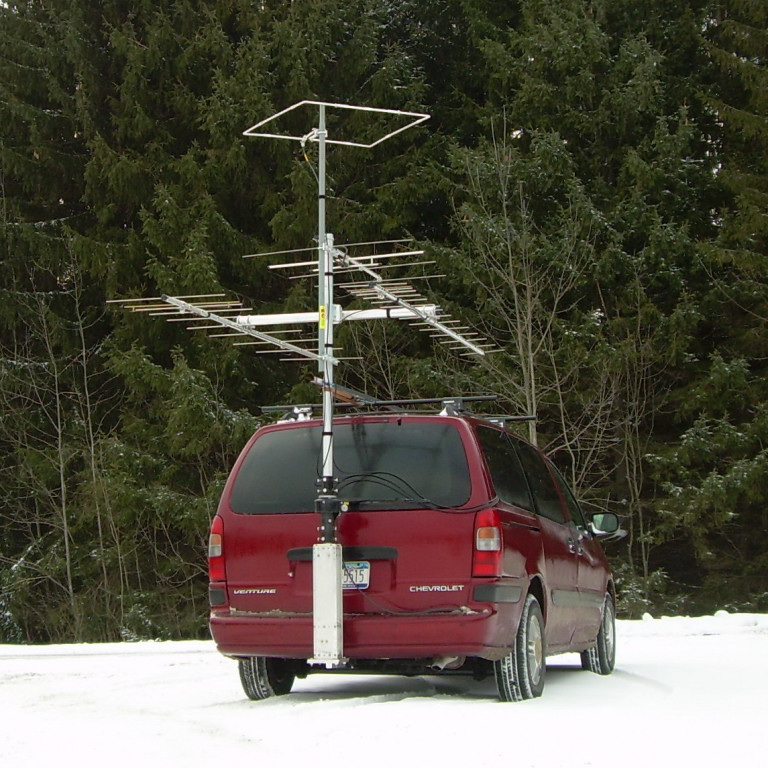