I was faced with a couple weather challenges. First, a Lake-Effect Snow Warning was still going until noon Saturday for areas to my north, preventing me from checking out newly discovered hilltops in that direction or activating FN23. Second, wind chills of 25 degrees below zero were forecast for Sunday. With a 1-hour setup time for my rover station (which is more like a portable station being used as a rover), I decided that I was going to use this contest to check out new operating sites in more southern latitudes Saturday (without the big equipment) rather than put in a serious effort. Then Sunday I would set up in the driveway at the home QTH. Most of my favorite hilltop sites are unavailable in winter anyway, but I had to do something to make up for being forced into missing the last two January contests in a row (2009 due to dangerous wx, and 2010 due to a 12-hour overtime shift each day for a product launch).

I left home at 11:48 AM Saturday heading for a hilltop in grid square FN21 in northern PA that I had researched but never visited. When I finally found the right way to get to the hilltop, the contest was already in progress. I pulled off the road at 1988 feet above sea level and worked a few nearby stations on the 6m/2m whips since I did not carry the full rover system with me. As it turns out, this site would not have provided enough room for the full setup anyway, but I want to re-visit in good wx and take the rest of the road to see if there are better locations along it. Perhaps I'll go back down there for one of the spring sprints. The car was pointed downhill and the low fuel light came on earlier than usual. This was around the time I had worked all the nearby stations, so it was the right time to head home. I dropped into the valley and visited the nearest gas station on the way back north. After fueling up, I decided to visit two more sites closer to home that I had seen while researching northern FN21, and both turned out to be poor sites, so they will get deleted from my database.

I stopped at home briefly, then it was on to my usual FN12 site late Saturday night. When I got near the site, I could see a 10-foot mound of snow blocking any further travel. This is where the plows stop and turn around. The same thing happens almost every January contest. So I parked in a nearby pull-off area just underneath the summit and tuned the bands, again just using the mobile whips for SSB/CW. Was able to work K1TEO from here on SSB, an amazing 173 miles on the wrong polarization with no antenna gain. He must be using fiber optics for feedline.

Sunday was too cold to risk setting up on windy hilltops away from home. The temperature reached 9 degrees at the warmest part of the day and eventually dropped to 9 below. Despite a blood-crystalizing wind, I set up in my driveway, but with just the 6m/2m equipment. I was able to work Maryland to the south, NH to the east, and Ontario (FN03) to the west from FN22. 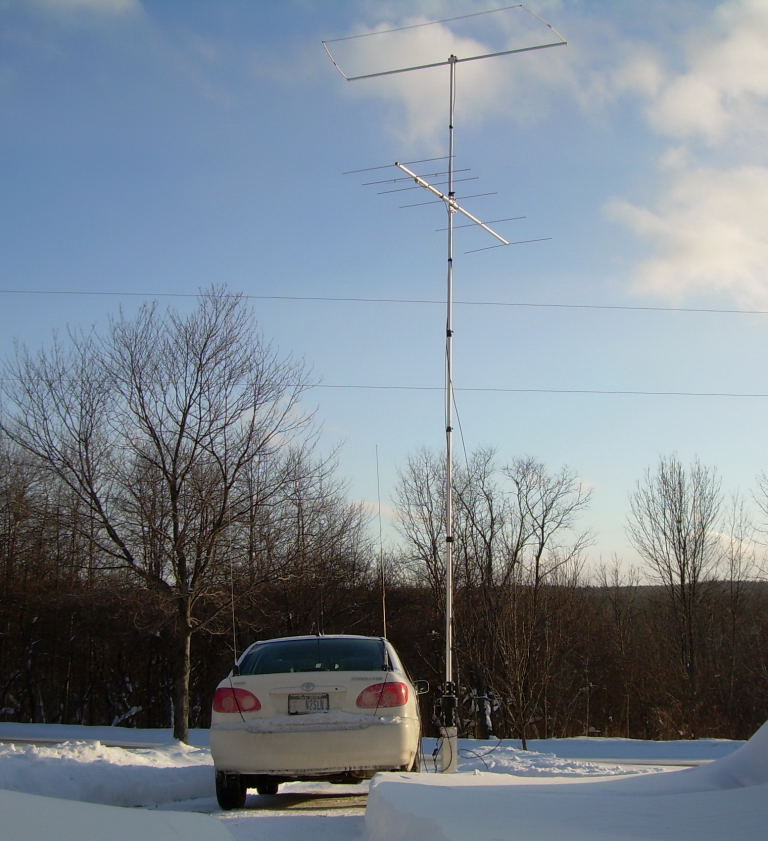