With KC2SFU expected to activate my home grid FN22 as a hilltop portable, I decided to drive north and activate FN23. The location was north of Utica, NY just outside the Adirondacks. It's a roadside pulloff with good elevation and a tremendous shot in all southerly directions, plus a very good shot toward the east. While driving through the Chenango Valley, (Norwich, NY) I noted a temperature of 73 degrees, which is quite nice for an October temperature. Some folks were out walking around in shorts. (October 3rd would end up being the warmest day of the month according to the National Weather Service climate summary given in early November). When I eventually began the ascent to the hilltop, the temperature had already dropped to 64 degrees, and there was a thick fog slowing my travel. I wondered what the fog would mean for propagation--it is sometimes an indicator of conditions that can propel VHF+ signals beyond normal range. I got out and set up the antenna system in the darkest daytime grid activation that I can remember.

With the antenna pointed southeast, I worked K1IIG in Connecticut who was about 5x1 and then struggled a bit with N2GHR in Long Island, but did manage to complete. A few minutes later, while calling CQ in that same direction, N2GHR stopped by again to say that my signal strength had increased to S9, and when he did, he almost scared me with how loud he was coming in (my volume was still turned way up for weak signal work). He was now 5x7 on my no-preamp station, and K1IIG jumped back in there and said I was louder there also (and his signal strength had also increased to 5x7). So the tropo that was predicted in that direction did materialize. N2GHR FN30 was the best DX to the southeast at 205 miles, and K1WHS FN43 in Maine (5x7) was the best to the east at 218 miles. It was also nice to see FN12 so well represented, as I worked 4 stations in that grid. After working W2UAD for new grid FN13, I continued with the antenna pointed in the westerly directions for the remaining 15 minutes of the sprint trying to get the attention of the other stations I had heard out that way, such as VA3ST, VE3ZV EN92 (loud), and VA3ELE FN03, but no one answered. It was time to tear down the antenna system, and I noticed that the fog had got even thicker--the water droplets were about as big as they could get and still be airborne. There had been no rain, but everything was soaked. I donned my headlamp and switched it on, but the white light setting was unusable--it couldn't penetrate the fog. So I switched to the red colored LEDs and that did the trick. This turned out to be my highest QSO count in a 432 sprint yet. 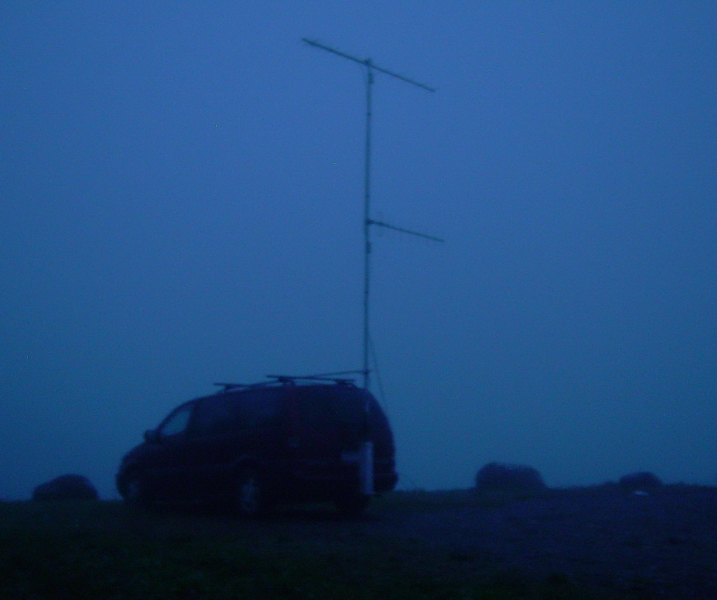