Due to the low activity level expected for such a difficult band, I decided not to enter the contest as a rover, and use all available time to make contacts instead. The location was the nearest rover site in my home gridsquare FN22. The antenna was at about 1970 feet above sea level and thankfully there wasn't much foliage to soak up the RF. I installed the antenna system in 49 degree rainy wx, but the east winds weren't strong. After calibrating the rotor control box, I synch'ed the clock to WWV, and had enough time to take a couple photos before the sprint began.

The last time I used 432 extensively (August UHF contest) the rig got very hot and started drifting off frequency. So I watched very closely to see if the same was happening this time, but it seemed to be alright even with extended periods of calling CQ on full power. At one point in the middle of the sprint, I noticed that the sky had cleared completely. Then in the last hour I began noticing that W9KXI FN12ne had grown from 5x3 to 5x5 and now there was heavy QSB on his signal. I figured that moisture aloft was setting up brief, weak ducting to the west. Sure enough just as the sprint was ending, clouds and rain returned to my area, and I just finished disassembly before a downpour hit.

No Long Island stations heard this time, and oddly I worked only one station in the activity-rich mid-Atlantic region to my south. But I was happy to work into FN13, a grid that always seems difficult to reach from this area. Turned northeast and picked up Maine station K1WHS FN43mj at 247 miles (397 km) but didn't hear him until the 3rd hour of the sprint. Best DX to the east was KW1AM FN41ct at 208 miles (334 km) who requested a QSL card since it was a new grid for him. Was also happy to reach KC2PLJ/R in both his grids. Turning the antenna through the northern and western directions did not get me any Canadian stations. Did not hear anyone from adjacent grids FN21, 23 and FN32. Scores are listed here. 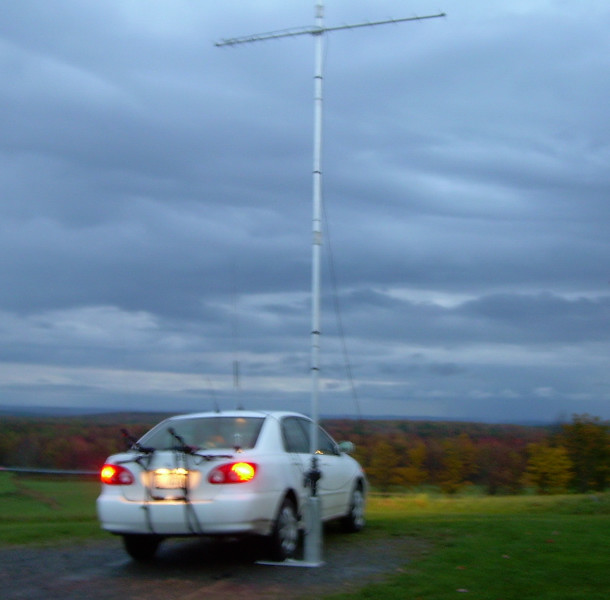