If the tropo won't come to me, I will go to the tropo.

For months I had planned to operate as a rover in this event. In the days just before contest day, I began watching the tropo prediction map. I noticed the western half of NY State repeatedly looking like it would not see any tropo, although evening enhancement is always possible if the winds are calm. This was the area I had planned to start roving (FN12xp) and then I was to move east into FN22dn, about a half hour's drive. This was the technique that netted me a first place in the rover category in 2008. Then, early in the afternoon on the day of the sprint, the updated tropo map came out and it showed the duct moving even further east than previously forecast. Now it was apparent that if I were going to take advantage of the tropo, I would have to move significantly east, but I wanted to stay in FN22. So I dumped the rover plan and drove 90 minutes east to set up as a single-op on a good summit.

Despite being 1,000 feet above average terrain, this site in eastern FN22 often has trouble propelling signals eastward. But my hope was that the tropo's strengthening gradient in that direction would help carry the signals better. In fact, I brought a 3-el vertically polarized yagi and had it fixed on 123 degrees (the direction of NYC/Long Island) hoping to take advantage of enhanced conditions in that direction. Unfortunately, two different sessions of calling CQ yielded nothing on 146.550.

Starting with the SSB antenna pointed south, I worked W3DIO and W8ZN in FM19. Then I heard KE2N FM18ew with a pileup that I couldn't break through, so I had to move on despite missing out on what would have been a new grid. Next, I worked K4ZOO FM08, thinking that this could be my best DX to the south. I heard K1WHS calling CQ, so I decided to spend some time with the antenna aimed at New England. After working Dave, I was delighted to pick up another Maine station, W1IPL FN54 which was my best DX to the northeast at 282 miles (455 km), then worked a string of stations in the eastern grids, and in the middle of it all with my antenna still pointed east, I worked W2SJ FM29 who was 5x8. The QRM was so bad toward the east that I had to switch to the vertically polarized beam so I could hear KJ1K/R. It worked perfectly--the QRM dropped significantly but his signal stayed loud since he was on Mount Greylock, MA, which is line-of-sight from where I was. I slowly began moving the antenna toward the southeast and picked up 10 more stations, 6 of them in FN31. I finished the first hour with 20 stations in the log. I started the second hour by scanning through the northerly and westerly directions and calling CQ, but didn't get any Canadian stations. Did hear VE2DC FN35 in QSO with someone, though. All in all, the 2nd hour turned out to be a good one, with 18 stations going into the log. In the 3rd hour I spent lots of time with the beam south, and ran into Maryland station K1RZ who always has good signals to this location. I also worked KG4HOT and W4MYA, both in FM07 and provided them both with a new grid. (Toward the end of the contest KG4HOT was 5x9). Then I would work my best DX to the south and best DX overall, with North Carolina station K4QI FM06 at 500 miles (805 km). Finished the third hour with the same number of contacts as the first hour. Satisfied that I made a good effort to the south, I started the final hour by turning the beam east again, and picked up 6 new stations to the east and southeast. Turning the beams south one last time, I worked W4JST FM17 which was a new grid 9 minutes before the end of the contest. Finished by providing a new grid for my last contact, and ended the final hour with 9 contacts going into the log. Total number of QSOs was 67, which is a new record for me in this event, whether single-op or rover. The tropo did help the QSO count a bit to the E and SE. One fellow in Boston said he had never heard such loud signals from FN22, and he was a loud 5x9 to me. But the tropo did not seem to help to the north, and I'm not convinced about whether it helped to the S and SSW along the Atlantic coast. I did not hear any activity from FN00, FN01, FN02, FN03, FN11, FN21, and did not work my own grid FN22. Despite using more elevation and more antenna gain, the grid count dropped by four grids this year versus the last single-op effort I did in this event. The antennas had a slightly sharper pattern this time, so I suppose that could be part of the reason, but the main reason is probably that the activity was focused in a few key directions (grid map) due to the coastal tropo. Signals to the SW through W were worse than flat. It was probably a result of the leaves still being on the nearby trees in that direction. Stations in those directions who are normally 5x9 were 5x5, and on a better antenna, too. Time for more antenna height.

K1TEO:
Nice to have enhancement and good activity last night in the sprint. Total was 150 q's and 36 grids in about 2.5 hours of operating. Missed the early part and QRT'd around 10:20 local time. It was unusual, but nice to see a good deal of activity even as I pulled the switch. Southern grids worked included EM81, EM95, FM04, FM14 and FM15. To the west EN91 and 92. To the northeast FN73. Quite a few local grids were MIA but maybe they were all pointing up and down the coast where the action was. Tnx for the q's and to the sponsors.

W8ZN FM19:
Yeah, us poor folks in the RF hole heard you guys working Florida!!! Despite losing 20 minutes at the start due to a transverter issue, I managed 160 Q's and 42 grids. See you all next week on 222. 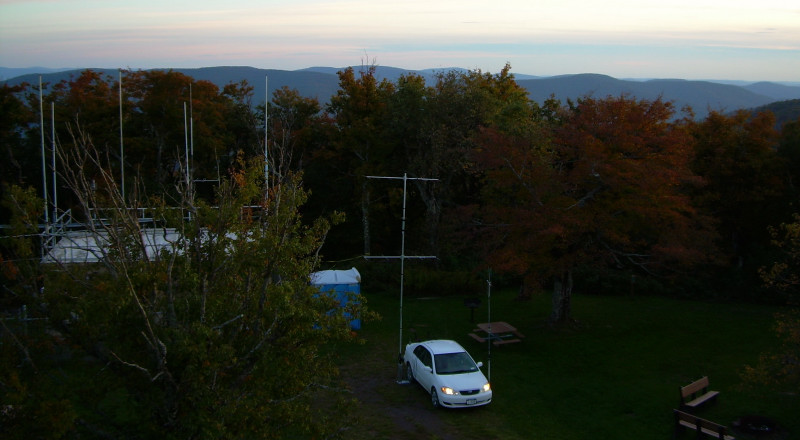