The Hepburn tropo prediction maps showed great ducting conditions in the middle of the day over Michigan and Ohio. Those conditions were supposed to slowly move east and weaken by sprint time and never get as far as my grid, FN22. I decided to try getting to the hilltop early to listen for pre-contest activity to the west. I did so, but didn't hear any activity of any kind in any direction. Must be the weakening had already taken place. I decided that I probably wasn't going to hear much more than usual in that direction, but would try anyway.

After a good 9-QSO first hour with stations mostly around the northeast (plus hearing Indiana station W9SR EN70), I made one more contact at 8:03 PM, then spent lots of time calling CQ on both SSB and CW with the antennas pointed west to try attracting the attention of more stations out that way. No luck. The Indiana station would have been 513 miles and probably a new distance record on 222 for me. I switched to FM simplex (remembering also to switch to the vertically polarized yagi) and called CQ in many directions. That effort resulted in zero QSOs, so I went back to SSB/CW. Those efforts cost me almost an hour without a contact, but I had to try.

The third hour is usually the worst hour in these sprints, but this one hit with a vengeance. This one would actually beat the first hour, which is something I've never seen. Late in the third hour I got called by VE3ZV and picked up EN92. With him coming in at 5x9, I thought I'd have a chance to work some westward tropo if there was any. Just then N8AIA jumped in there from EN82 at 5x6, a contact which should have been a 270 degree beam heading for me, but I noticed that the rotor controller said 310 degrees. When I turned to 270 degrees, I couldn't work any of the stations that were on that 270 degree beam heading. There must have been some horizontal tropospheric bending in addition to the usual vertical bending. While being perplexed by this, I heard VE3SMA answer my CQ and provide EN93 which is usually a tough grid for me to find. The third hour finished with 10 QSOs.

More calling yielded nothing, so I turned the beams back toward the local activity to start the final hour. I picked up a few more stations and K8GP thanked me for providing a new grid this late in the game. It's a good thing I worked him when I did because he shut down half an hour early. No more stations being heard, I turned the antennas back to the oddball northwest beam heading and the conditions were good again: I worked 2 more Michigan stations, and one Ohio station, with the Ohio station providing new grid EN91. Best DX to the west (and best DX of the entire sprint) appears to be Michigan station N8WNA EN82 at 383 miles, a contact made in the final hour. Best DX to the south was Maryland station K3CB FM18 (266 miles). Best to the east was W1XM FN42 at 213 miles. Best to the northeast was Maine station K1WHS FN43 at 248 miles, with honorable mention going to northeast Vermont station N1JEZ FN44 (240 miles). 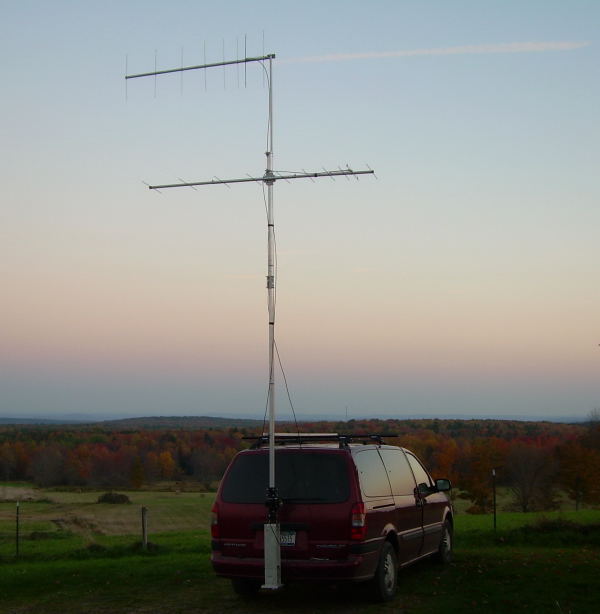