With a Tornado Watch in effect earlier in the day, I knew this could be a challenging sprint. Luckily, the watch was cancelled at 3 PM local time and skies began clearing up. Temperatures were so mild that I stayed comfortable without a jacket even on the windy hilltop.

Due to the low activity level expected for a rare band, I decided to participate in the single operator category despite my love for roving. This would give me the advantage of being on the air full time--something I cannot do while roving since my rover station has no antenna operational while I'm driving. The location was the nearest rover site in my home gridsquare FN22. The antenna was at about 1970 feet above sea level with a downhill slope in all directions.

Murphy struck long before the sprint started. Earlier in the day I did a "dry run" and discovered that the XMIT light was stuck on as soon as I powered up the transverter. But unplugging the PTT-L control line got rid of it, so I thought everything was okay again. When I got to the hilltop, the problem showed up again, and I began getting "broken audio" reports so I initiated the process of elimination by tipping over the mast, disconnecting the feedline from the antenna, and reconnecting it. Still got "disappearing audio" reports. Took the amp out of line and still had the problem. Detached the microphone and reconnected it...no help. I began pushing on cables on the back of the transverter and bingo! As soon as I moved the PTT-L socket around, I got the XMIT light to go on and off, so there is probably a short--most likely where the wire was soldered to the male connector. Hopefully this is the source of the disappearing audio problem.

All the downtime surely stole valuable minutes, especially in the all-important first hour. But somehow I managed to work slightly more stations and grids than last year. My best DX to the west was VE3ZV EN92 at 231 miles (372 km). Best to the southwest was my last contact for the night and my longest overall--K8TQK EM89 at 458 miles (737 km) to southern Ohio (which got both of us a new grid). Best to the south appears to be Virginia station W4XP FM19 at 277 miles (446 km) but if K4QI FM06 had heard my CW reply at 0014Z, it would have been him at 485 miles into North Carolina. Turning the antenna through the northern directions did not yield any contacts. Best to the east was K1KG FN42 and to the northeast was K1WHS FN43 at 247 miles (397 km). 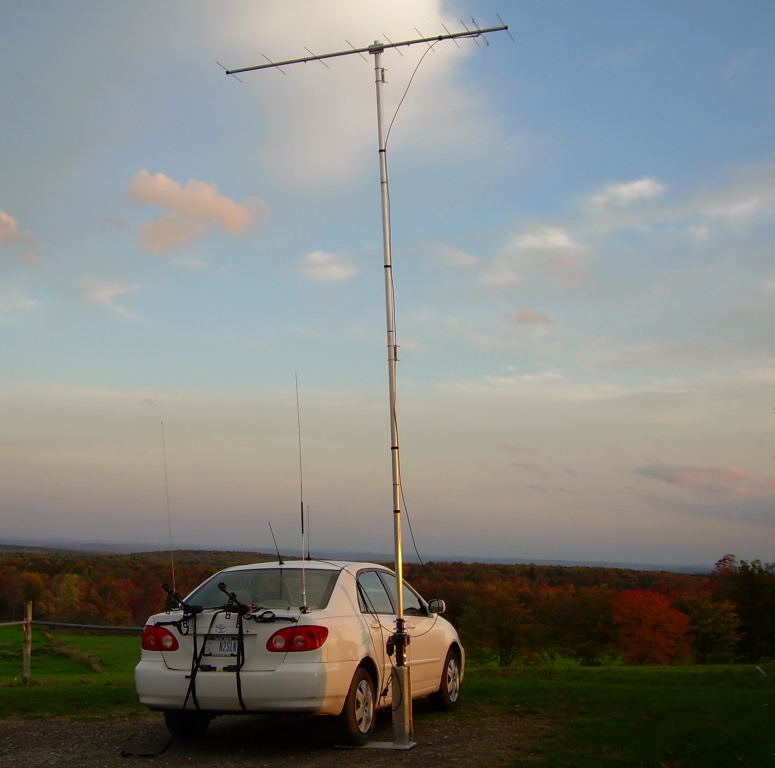