History and Philatelic Documentation
Including new concerns raised about radiation 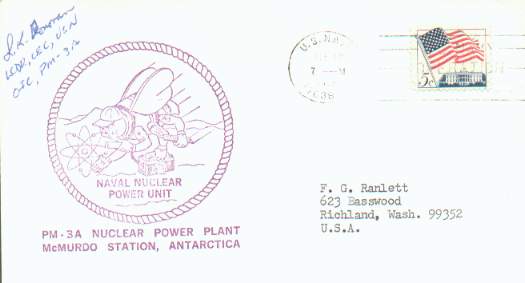 As many of the polar philatelists reading this page will already know, there was extensive involvement of the U.S. Navy in Antarctic regions since 1955, as preparations were made for the International Geophysical Year (IGY).  The Department of Defense was delegated the responsibility for logistic support of Antarctic operations, and the maintenance of scientific research stations located in Antarctica was assigned to the Department of the Navy.

The nuclear power plant that was at McMurdo Station was called PM-3A. That designation stood for "Portable, Medium output", and it was the third of its general type, and the first of that type to be designated for field use, hence the A in the designator.

It was authorized and funded by Congress in August of 1960, and first went "critical" in March 1962.  It was manned and operated by U.S. Navy personnel under the direction of the Martin company and the Atomic Energy Commission (AEC) until May 1964.  At that time, the Navy assumed the full responsibility for its operation and continued to be in charge until the plant was closed in  September 1972 and decommissioning actions were completed.

Eighteen months is a phenomenally short time in which to design and construct a nuclear plant anywhere, much less in the harsh and demanding environment of the Antarctic.  However, the idea of utilizing nuclear power in support of Operation DEEP FREEZE in Antarctica was actually not a new one.  The idea had actually been conceived as early as 1955, when a study concluded that utilization of nuclear power there was not only feasible but highly desirable.

The reason the plant closed was primarily an economic one.  A shield water seepage into insulation around the reactor pressure vessel and primary coolant piping made chloride stress corrosion cracking of the surfaces of the pressure vessel a possibility.  The high cost of performing a full inspection resulted in the decision to permanently terminate PM-3A operations.

Close-up of the "corner card"/chop often seen on these covers. 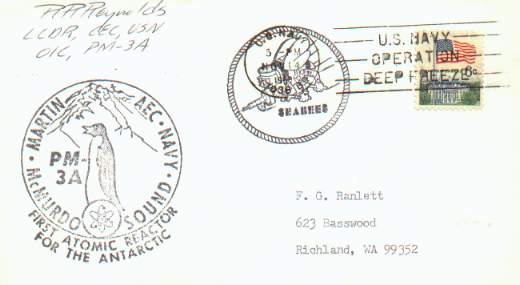 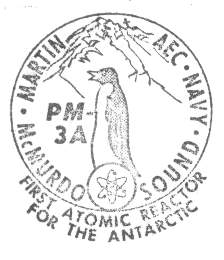 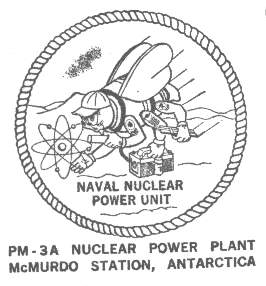 Close-up of the Naval Nuclear Power Unit Cachet as seen on the first cover.

For the historians in the bunch, a table showing OIC's as I have them listed, based on cover signings and upon information received from former naval personnel who were part of the unit or had direct knowledge of the staff assigned.  Updated September 2009.

There has been some discussion in the mailing list as to when the last actual personnel departed Nukey Poo. One other clue might be that Captain Henry Church, Master of the USNS Maumee, T-AO 149, posted philatelic covers from his vessel, from 17038 Branch for Operation Deep Freeze 1976, using the PM-3A penguin cachet and some 1-line markings from that vessel. I have not seen any further marking or cachets from 1976 forward, so I think that marked the end as far as philatelic documentation went.   Beginning during Operation Deep Freeze '73, the unit was being dismantled/decommissioned, and it appears it was finally decommissioned in 1980.  There could have been private mail of course (non-philatelic), but no more cacheted mail, to my knowledge.

If you have better information about the decommissioning, please e-mail me.  I have recently received some very helpful information from a former plant superintendent at PM-3A, and I have posted some additional data at the Polar Philately Yahoo Group for those that have more interest.  Look under the files section, for a Word 2000 document entitled "PM-3A".  You have to be a member of the Yahoo group to access the data.  If you are not a member and would like the document for research, or for your personal records, please e-mail me.

Concerns raised about radiation exposure from PM-3A. Did you serve there?

Reports are surfacing of Navy veterans contracting cancer after serving at the McMurdo Station in Antarctica when the station was powered by PM-3A. Follow the links for the full story.

The URL for this page is http://www.qsl.net/kg0yh/nuke.htm