Why was Byrd at the Japanese Surrender Ceremony aboard the Missouri?

Around 1939, scientists at the Research Foundation of the Armour Institute of Technology began building a large research vehicle (a behemoth) called the Snow Cruiser.  It was an ungainly beast with huge balloon tires, (built by Goodyear) built to withstand the harsh environment of Antarctica.  It weighed 75,000 pounds, was more than 55 feet long, 20 feet wide and was 16 feet tall.  It was designed for a range of 5,000 miles and could support five people with supplies for a year.  It carried a reconnaissance aircraft on top of the cruiser (as you will see depicted in the cachet on the one cover) for aerial photography.

The plan was for the Cruiser to go with Admiral Byrd on the United States Antarctic Service Expedition, which being an officially sanctioned government effort, was the title of the Expedition--yet most all of the newspapers of the day headlined it as Byrd's Third Antarctic Expedition, often seen shortened to BAE III.  It is easy to see the confusion, as Byrd was the Commanding Officer of the expedition, having sold his ship, The Bear of Oakland, to the government for $1.00 so it could be used for the voyage.  Byrd and his supporters had also contributed a large amount of financial support to the costs of the expedition.

The 1930's and 1940's were the golden era of naval covers, first day covers, polar covers and event covers. First flights, dirigibles, camel posts, carnivals, parades... whatever a region had going on, some philatelist somewhere was probably making a cover to document it and preserve it for posterity!

There are also related covers that were carried aboard the Antarctic Snow Cruiser on its trip from Chicago to Boston for its journey to the Antarctic. The Cruiser was driven there on the regular highways! Can you imagine seeing this thing lumber by you on the highway?  While enroute,  it was under the captaincy of its designer, Dr. Thomas C. Poulter, who was the Scientific Director of the Armour Institute.  The cruiser was intended to be loaded aboard the motor ship S.S. North Star and then transported to Antarctica.

According to the wordage on the Fidelity Stamp company covers shown below, defense plans halted Byrd's Third Antarctic Expedition. The covers shown further down the page were intended to have been carried all the way to the South Pole. Click here to go see a letter of explanation that was enclosed inside the covers, and which certainly serves to fuel much speculation currently in vogue as to a conspiracy to cover up what Byrd really saw there and later in Operation Highjump. (aka "Admiral Byrd" conspiracy)  Run those words or "hollow earth theory" on Google, and you will find some pretty amazing links!  I am still cogitating on it...

In that letter, note the reference someone has circled about the Nazis... there has been much speculation over the years that Admiral Byrd was actually in the Antarctic for reasons that went beyond the U.S. claim of "routine" polar exploration. The Nazis were supposedly establishing (or in fact, already had, established) a strong presence there and the theory is that Byrd (who better than Byrd?) was sent to do some reconnaissance, or perhaps even try to eliminate the threat, or?? Maybe someday the records will be declassified and we can finally know for sure...my initial "take" on the story was that it was probably just actual polar exploration--but after some further research into a possible cover-up, and the discovery of a supposed secret diary kept by Byrd, I am not at all convinced that there was not an ulterior motive for the expedition.  Like it would be the first time the government ever launched a cover-up?

If it were truly a scientific venture, I am sure that Byrd was instructed by his superiors to keep his eyes open, and to call anything in that they saw out of the ordinary, as flash traffic! My understanding is that in addition to being the great explorer, he was also a sailor's sailor... he would have understood the need to be vigilant!

When the Cruiser eventually made it to Antarctica in 1949, it was said to have been a lemon.  Peter Muller, writing in Popular Mechanics in 1993, said that when it (finally) arrived, "The huge tires spun helplessly much of the time, sinking as much as three feet into the snow. Furthermore, the big vehicle was seriously underpowered. The motors overheated after it had gone only a few hundred yards."

The Snow Cruiser was abandoned there at Little America, and the ice shelf on which it was left has long since caved off and the cruiser is presumed to have sunk, and is resting at an unknown location on the Antarctic shelf sea floor.  A much better story, however, and one which is purely speculation- is that the Soviets took it.  Without any proof, it is just a story, but it adds to the intrigue of the whole affair.  Of course, engineering students will recognize the Snow Cruiser as a great engineering curiosity which is often discussed as one of those great ideas that simply went "south". Literally. 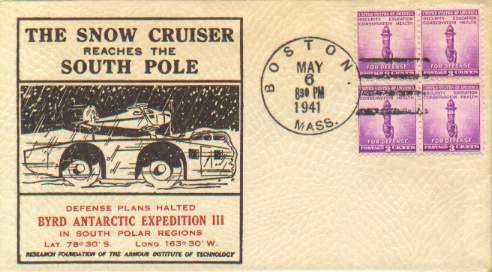 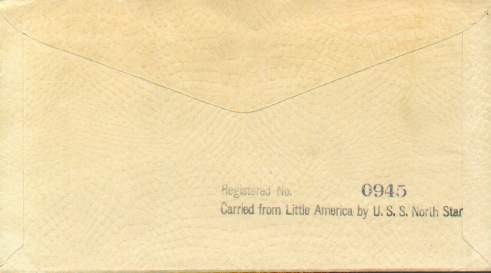 An interesting adjunct to the Snow Cruiser story is that the Fidelity Stamp Company advertised the availability of the Byrd covers with a postcard, presumably sent out to folks on their mailing list. The covers went for fifty cents! Today, these covers are usually seen going in auctions for around ten dollars and up.  Go here to see the postcards Fidelity used in 1939, to notify the collector community and  public about the tangible souvenirs for the Byrd Expedition.

The URL for this page is http://www.qsl.net/kg0yh/cruiser.htm