The RM-20 was selected as my mobile Geiger Counter for a few reasons.

A) It was inexpensive and small. Also appears to be rugged. The type of
meter movement installed seems to have a good reputation for long life,
unlike Eberline's other units which use a super cheap ModUtek meter.
Update: It has indeed proven to be rugged in several years of roadwork since
this article was originally written, all climates and altitudes from coast to coast.
All that has needed to be repaired is the
BNC cord one time.

B) Has adjustable HV with meter readout - Works with all probe types, GM and Scintillator
C) It has both a meter and a speaker, with volume control. An ALARM circuit
is easily re adjusted via a front panel control.

D) The instrument works from an external DC source (car battery). An internal 12V battery will run the
unit all day long for short expeditions away from the vehicle, but to recharge the internal battery, the AC power
cord must be plugged in. No recharge from vehicle power

A few mods were made to enhance the mobile experience. In line with the
external power connector was added a series diode, in order to protect the
meter from accidental polarity reversal.  The hard to find MHV connector was
replaced with a standard BNC, for cross compatibility of cables.


The 1" x 1" Gamma scintillator is protected from scratches, vibration, and
direct sunlight by placing it inside a sturdy cardboard shipping tube. The
tube is also covered with contact paper.

After driving  around for a while I've established a base-line background count. The alarm is set

about 1.5 times the local background.

Attaching the unit to the dashboard with Velcro keeps it from sliding around in traffic. At first the tendency

was to watch the meter, BAD IDEA. Forget the meter, let the alarm do the work. It may only alarm a

few times a season, but it WILL catch your attention.

In the mountains I add an altitude meter, nav gear and GPS.

*Here are a few of the fish I've caught with it:*

For a while after metering this target, our vehicle was boxed in by several black SUV's with dark tinted windows! 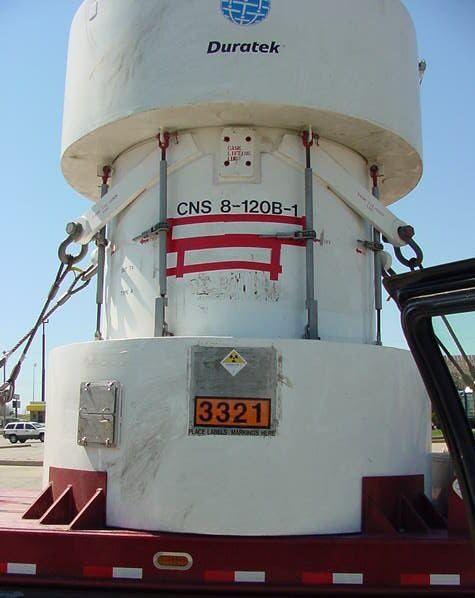 UF6 being transported in Kentucky near Paducah> 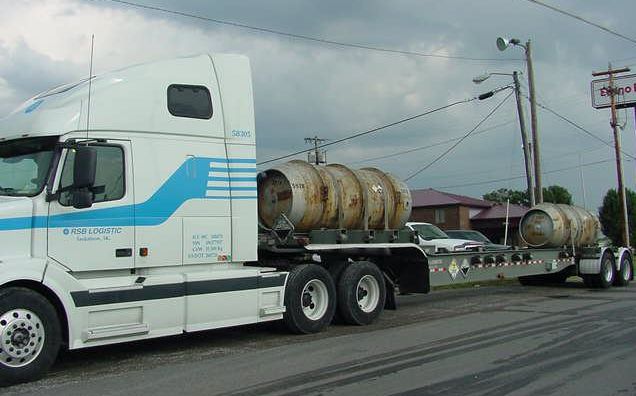 Another UF6 shipment, this one in Illinois> 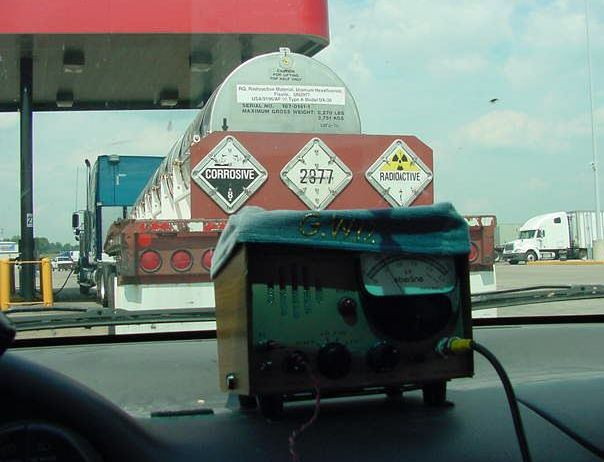 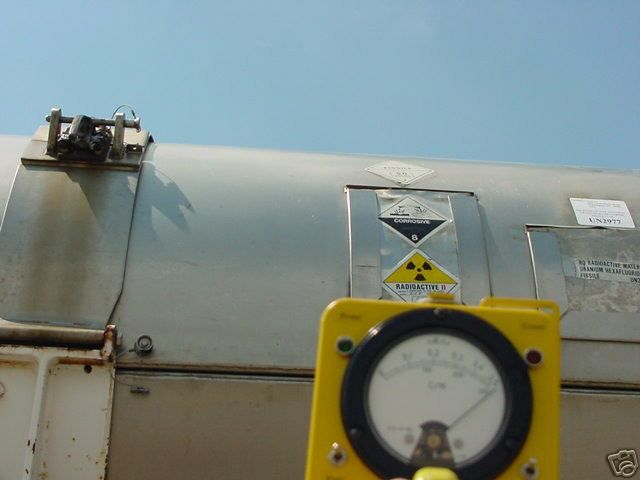 These drivers seem to take frequent visits to regular truck stops, so I never had to follow very long to get a

stationary target. In every case, they go inside and leave the truck totally unsupervised!

This year I'm adding a few new sensors to the Mobile Rad Lab.

One is the Home-Made Neutron Detector Probe, built around a Reuter-Stokes

Another is a handheld GAMMA SPECTRUM ANALYZER to grab spectra on the fly from the next target.

Shown are a few from which I can chose

The Exploranium GR-135 is Gamma only>

Quantrad RANGER PLUS does Gamma and Neutrons.>

BUBBLE DETECTORS> One for Gammas, one for Neutrons>