What *IS* and What *IS NOT* a Geiger Counter

Let's clear the air right away on this topic. Many newcomers to this fascinating hobby are introduced to their first instrument by
a "bargain" buy on eBay or elsewhere.
Not that there is anything wrong with this at all, but many if not most advertisers are either uninformed or untruthful.

Know what you are getting, and what to expect from it once you have it. This summary may help.

***A Geiger Counter by definition must have a Geiger-Mueller tube detector element as the probe. From here on out we'll

call that component a GM or G-M tube.
Another distinction is made between "measuring" and "detecting". The G-M tube detector itself comes in 3 different main physical
configurations, namely:

1) The thin sidewall tube, commonly referred to as the "hot-dog". Good sensitivity to Beta and Gamma radiation. Rugged. Inexpensive. Made
from metal or glass. A type 6993 metal tube is the standard tube included on any CDV-700. Easily picks up radiation from a Radium

watch dial or Thorium lantern mantle. Material thickness of the walls will block all Alpha particles. 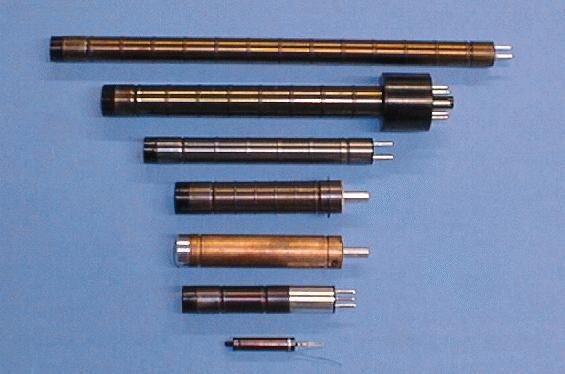 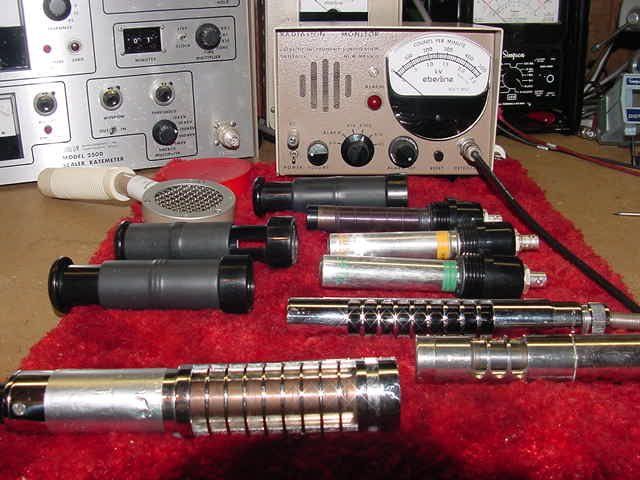 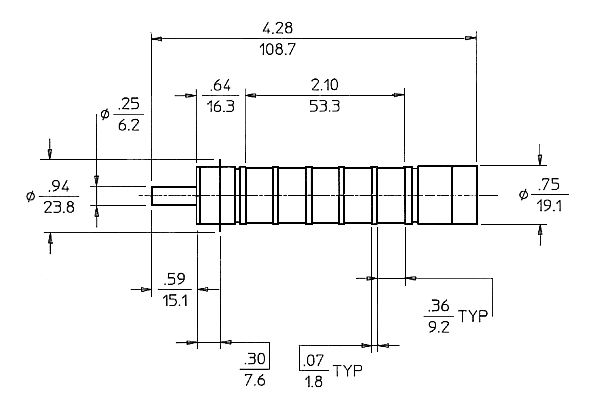 2) End-window tube. As the name implies, it is a similar tube to the hot dog, usually a little larger diameter, but fitted with an end-window
of very thin Mica or Mylar. By doing this, Alpha radiation can also be detected, and the larger gas volume makes it more 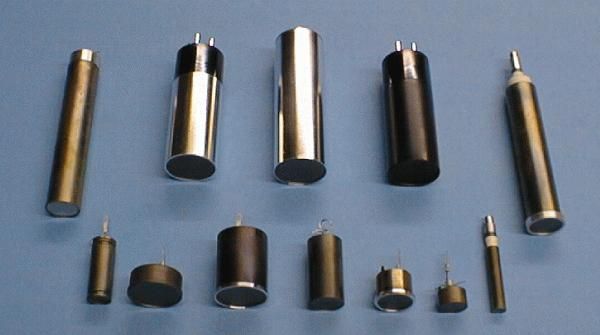 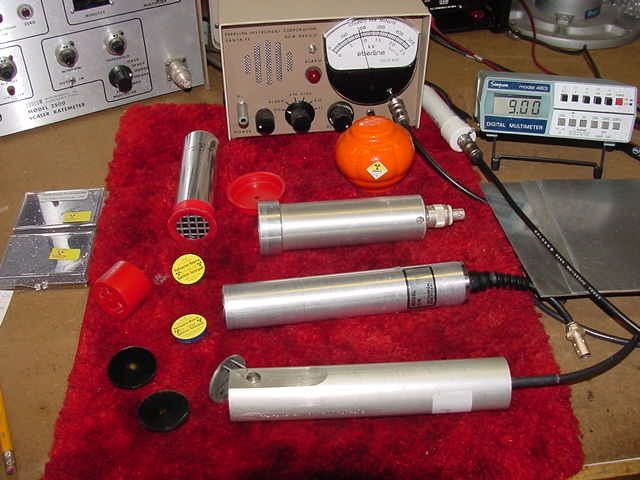 sensitive to Beta and Gamma as a bonus.
Maybe 2-3 times more sensitive than the "hot-hog". The trade off is the tube is that it is more fragile because of the very thin window, and more
expensive.

3) Pancake tube. Actually this element looks more like a hockey puck. Usually 2" or so in diameter and 1/2" thick. The entire face is a
thin-window, and this type probe is the most sensitive of the G-M family. It will let in Alpha, Beta, and Gamma radiation, with a sensitivity out
of this world. Even though they are also fragile, usually the housing or "handle" in which they are installed gives them some protection. A screen is
almost always used in front of the element to keep it from coming into physical contact with any object, which would surely damage the window
material. 5-6 or so times more sensitive than the "hot-dog" on Gamma, much more sensitive to Betas (X100),
and remarkably sensitive to Alphas. Be careful if buying a used element. They are very susceptible to damage in shipping, and should
be packed in a sealed tin can for transit. On long road trips, I store my pancake units in an Army surplus steel ammo box,
the kind with an O-ring. 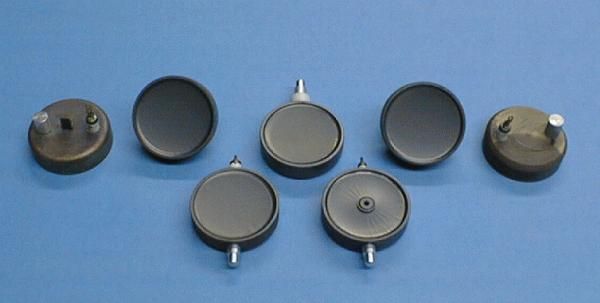 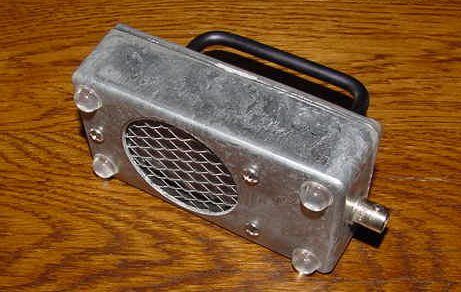 A) They need a high voltage DC charge in order to work. This is generated within the counter and is impressed directly upon the wire going to
the probe. BE CAREFUL!
Military surplus units usually use 500 or 700 Volts. Older non-solid-state commercial meters can use probes of anywhere from 500 to 900 Volts.
Modern commercial units use 900 Volts almost exclusively.
Any G-M tube will work on any Geiger counter, as long as the operating voltage is compatible. The FIRST modification to a
CDV-700 unit should be to add a BNC probe connector.

B) All are filled with a gas mixture, at low pressure. This gas is usually Neon, and a Halogen gas called a Quench gas.

C) When radiation penetrates into the tube, it causes the gas to ionize, and the high voltage is essentially shorted to ground between the two
electrodes ( one being the body of the tube, the other a wire or other conductive structure inside). When this happens a very large pulse is produced,
and that event is the "click" you eventually hear in the earphone. All pulses are the same, no matter what triggers them.

Only a fraction (<1%) of the Gamma radiations will produce this click, with the vast majority passing right
through the tube, or being absorbed by the walls. Betas and Alphas are charged particles, therefore they easily interact with the

gas causing pulses. Virtually all of the Alphas and most of the Betas that get inside the tube are detected. Gammas are non
charged electromagnetic radiation, and do not readily interact with the gas, unless the photon actually collides with a gas atom, very unlikely.
Photons are detected by first interacting with atoms of the walls of the tube ( far more dense than gas, therefore much more likely to happen).
These interactions create secondary charged particles, and these in turn are what interacts with the fill gas.
Gamma sensitivity is relatively low in any GM tube for this reason, compared to a NaI(Tl) scintillation probe.


D) Because there is a certain time needed between pulses for the quench gas to extinguish the spark, G-M tubes have a definite limit on the upper
level of how many pulses can be detected in a given minute. Rephrasing this important point: A G-M tube will become saturated in a high radiation
field, and will actually stop responding, giving a low or zero reading. This "deadtime" phenomenon also inhibits a true
linear response at high count rates. Explanation: take a reading from a disc source. Add another identical disc source. Simple logic would
suggest that the second reading would be exactly twice that of the first reading. In fact, it is not twice, but less than twice. Exactly
how much less depends upon which part of the response curve the tube is operating. Charts are available called "Gamma Sensitivity"
and "Energy Response" which allows compensation calculations, assuming you know the exact characteristics of the radiation being
detected.
For a detailed explanation of the above, see:

OK now we have the basics, we can move on.

Re-read point C) above. We can see that a G-M tube, sensitive as they may be, can only give a certain reading from a given
radiation sample. As a matter of fact each of the 3 types of G-M tube will give a different CPM reading, according to it's sensitivity and wall
characteristics relative to the radiation components. Meter dial scales must be calibrated for a specific probe,
showing the correct relationship between CPM and mR/H. Only Ludlum makes easily interchangeable meter
scales, and a few all-electronic ( microprocessor) units can convert internally. Notable among these is the
inexpensive Far West Tech- Cipher 5000.

Gamma radiations from different sources have different energy levels.These energy levels are analogous to "frequency" or "color" in other types
of electromagnetic radiations, like light, and radio. It would be helpful if the probe detector would somehow give a different

height pulse for each different energy level
it encounters. In the case of the G-M tube, this is not possible.
Now in order to achieve more sensitivity and to produce a pulse of varying height, we must move up to the next level of detector probe. This
class device class is called "Scintillators".

A Scintillator works on an entirely different principle. We will explore them in detail in a separate article, but in brief, they work by
using a special material that will emit a light pulse whenever it encounters radiation. This material varies depending on it's intended use but
they all produce a photon for each particle or ray they encounter. Fixed to this material is a super sensitive electric eye tube, called a
photomultiplier.
When it sees the photon, it will amplify it as much as 1 million times and produce an electrical pulse output. Now the good news : Not only is
the Scintillator highly efficient, the pulses it gives off vary in height according to the energy level of the radiation. In more advanced
counters, this variable height allows you to discriminate between the different energy levels and perform what is know as Gamma Spectroscopy.

Identification of specific isotopes is possible with such a setup. Ratemeters or counters that are specifically designed to work with Scintillators will have a
variable high voltage control, "Threshold" and "Window" controls. .
However good results can be obtained with the fixed 900 Volts from a CDV-700 or similar, if modifications are made to the
metering circuits and a preamp added. We will go into this later in another article.

OK now go back and re-read point D) above.
Because the G-M tube will saturate, it is useless in a very high radiation field ( such as would be encountered after a Nuclear Bomb blast).
There are other devices that ONLY work in a high field but have NO sensitivity to low radiation.

These are the ION-CHAMBER class. Included are the Civil Defense CDV-710, 715, 720 etc. Basically any CD unit EXCEPT a CDV 700 is
probably an ION- CHAMBER. Now the bad news. These work on an entirely different principle than the G-M
series, and can not be upgraded to work with a G-M tube. In addition there is virtually no way to test these "survey meters", because it would
take a dangerously high radiation field to make them respond even a little. Bottom line, if you have a CD 715, it is a conversation piece, cold-
war curiosity, civil defense collectable, door stop, but it IS NOT A GEIGER COUNTER.

Of the all yellow Civil Defense items available, only the CDV-700 is a Geiger Counter.

There are some positive features of ion-chambers that make them uniquely suited for certain applications, namely energy fidelity and dynamic range. These attributes are explained further in another article.

The treatise may under no circumstances be resold or redistributed in either printed, electronic,

or any other forms, without prior written permission from the author.

Comments, criticism and questions will be appreciated and may be directed to

the author by email to [email protected]