Antennas for the Low Bands

What is the "best" antenna to use for transmitting on 160 and 80 meters?

Well that depends on a lot of factors. If cost is one of the factors, you can rule out rotatable full sized beams. If your main activity is ragchewing with other stateside stations (assuming your are in the U.S.), nets. traffic handling, then you would want a high angle of takeoff antenna, or even a NVIS (Dr. Carl O. Jelinek, NVIS: Near Vertical Incidence Skywave).

For DX, it is pretty common to strive for a low angle antenna. Verticals meet this requirement but require a counterpoise.

This was my first attempt at a real 160M transmitting antenna. With abundant trees on our property, it was easy to build the radiator portion. Height for this antenna was set at about 66 feet, and then the horizontal top section was tuned for resonance.  With 4 tuned and insulated radials, the SWR was flat using 50-Ohm cable feeding the bottom. Adding more radials raised the SWR, as anticipated (Maxwell: Reflections: Low SWR for the Wrong Reasons).  Just as W2DU predicted, the lowest SWR was achieved through high ground impedance. Lowering the impedance by adding more radials lowered the ground impedance, but raised the SWR. Basically an inverted L over a "perfect" counterpoise simply is not a 50-Ohm antenna. On air results were mediocre at best, certainly not good enough to be a consistent pileup breaker.

As an aside, this antenna was later used as a platform to develop a multiband vertical featuring a single coax-wound trap at 66 feet then multiple vertical elements below that. More on this antenna in another article.

Next I tried a "sloper". Ultimately simple, it is a single piece of wire, tuned to ¼ wavelength, strung from and fed with 50 Ohm coax at the top of a tower, just below the top plate.

A 56-foot self-supporting crankup tower holding my VHF/UHF stack was fitted with such an antenna.  The 160-radiator element was cut long then trimmed to resonance......or so I thought.  I tried every conceivable length, angle, and combination possible with terrible results, both with instrumentation and on-the-air. A dismal failure from every aspect.

Having blown many hours and wasted many weekends on this 160M antenna, I gave up on it. With nothing to loose, it was decided to cut it all the way back to 80M.

Not only did it resonate perfectly the first try, the SWR was low.  Not too wide an SWR-Bandwidth though, so I kept cutting it for the 75M band, where I understand some hams operate from time to time.

Again, it came right in, looked good on the instruments and tuned up to the rig perfectly.  Since the difference between 75M and 80M in terms of length was only a few feet, it was decided to "multiband" the antenna by using large porcelain Fuse holder as the bottom insulator, with the needed extra few feet of wire on the other side. For 80M, a piece of copper water pipe is snapped into the fuseholder, for 75M it is removed. Fortunately the "switch" is easy to get at and not far from the operating position in this case. 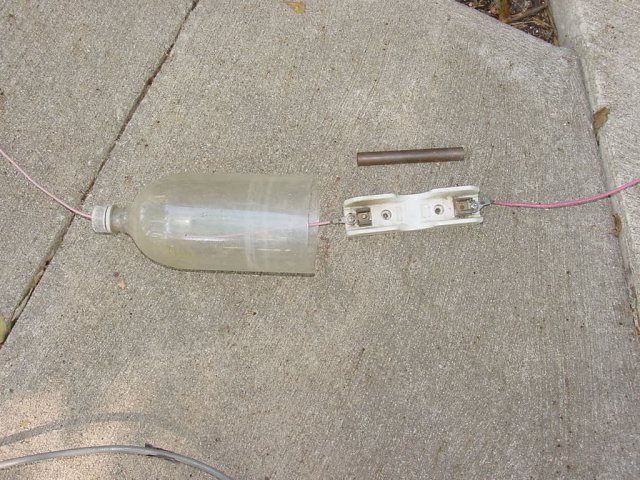 Results were fantastic on both ends of the range. DX was easy to work and pileups were consistently smashed.

After thinking about this for a while, it became rather obvious that the tower/antenna was probably self-resonant very near the operating frequencies.

Notice that this tower is grounded, but no counterpoise (radials) is used.

So use a taller tower?

Of course that was the answer.  This time it was an 89-foot self-supporting crankup.

The antenna is attached as before, at the top plate and fed with 50-Ohm coax. Above the connection point is an HF stack, with a 5 element 20M monobander at the bottom position.

First the antenna was configured exactly like a scaled up version of the 80M success.

Unfortunately the results were dismal, however it did resonate easily, as expected.

The problem was the shallow angle from the tower the wire had to take because it was so long.

Remembering some earlier discussions with K7CA about 160 antennas, a very sharp angle was tried, but of course the wire hit the ground with 60 feet left over.

Next I tried kicking the end half of the antenna out horizontally, with various angles and heights above ground experimented with over a long winter season.

This yielded a lot of data, from which the final iteration was designed, installed, then never changed.

Antenna comes down at a steep angle from the top plate, goes though a LARGE porcelain insulator at the top of a 10-foot tall wooden post, placed 10 feet from the tower. The rest of the wire kicks out horizontally at the 10-foot level where it is terminated in another large porcelain insulator.

That?s it. No radials. No matching devices at all- direct fed with 50-Ohm coax. Nothing fancy.

These simple antennas were quickly responsible for the 160M and 80M portion of the first (and only) 160 through 6M DXCC from the Zero District.  The response seems to be omnidirectional.

I think the effectiveness of this antenna is mainly due to the fact that the current node is high in the air, away from ground losses. 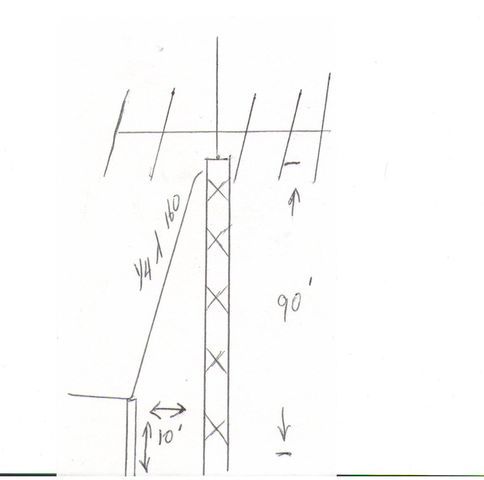 Note: These antennas are used for transmitting. I use separate receive antennas.

Don't expect to hear much DX on any vertical, antenna.

CAUTION> The end of a top fed antenna is near the earth, and at a tremendously high Voltage (Voltage Node). Care should be taken in the selection of the end insulator, use glass or porcelain. Limit access to this area by pets or people!!

See you in the pileups!